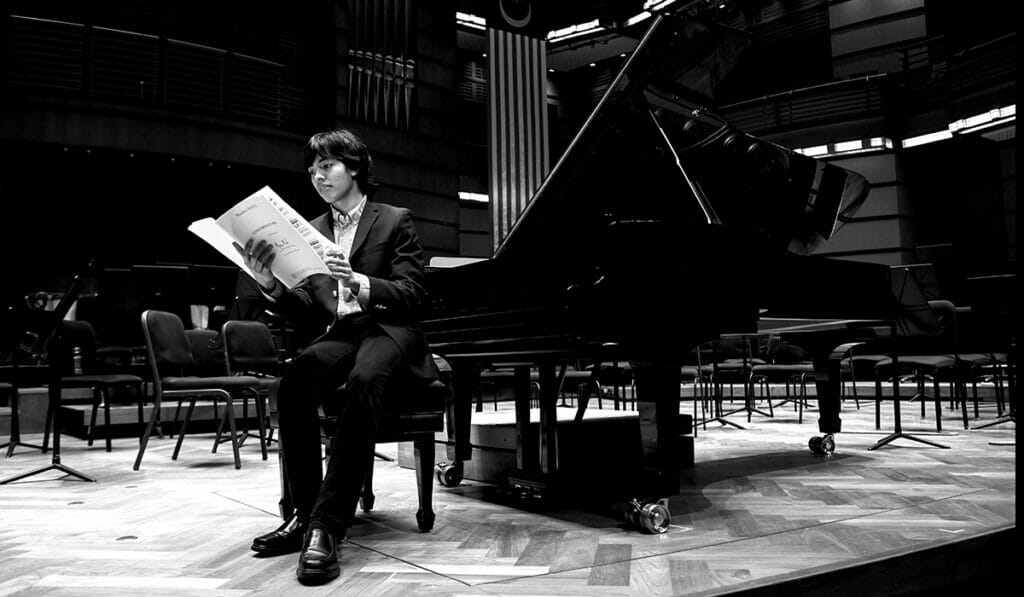 For Tengku Irfan music is the food of love
Thursday, January 16, 2020 By Editors

Quiet and calm yet a force to be reckoned with on stage, Tengku Irfan, is the embodiment of a virtuoso musician. Tengku Irfanâ€™s many achievements include his post as the Youth Ambassador of the Malaysian Philharmonic Orchestra as well as his experience with conducting orchestras, both of which have earned him a position at Juilliard.

What drew you to the piano at such a young age?

When I was 6 years old, my father bought an electronic keyboard, with no particular direction or goal in mind. He bought it because there was always music in the house back then. There was a bit of rock, a bit of pop-jazz, a mix of everything. But somehow at that age, without being forced into it, I started playing around on the piano and experimenting with it by myself. It wasnâ€™t serious at first but then it gradually grew to become a passion. I began to formally learn the piano properly when I was around 7 or 8 years old.

When did you begin to step into your role as a composer?

There was no specific age or time for when I first started getting into composing. It began with improvising pieces that I used to play in my younger years when I was learning exam pieces. Whilst learning the pieces I would change the notes just for fun, and I soon grew to change more and more notes, before gradually beginning to write down what I had improvised.

I do still improvise when I have the time. Regardless of whether it is improvisation or I am playing a normal classical piece, my aim or my goal is always to grab the attention and focus of the audience.

What are your thoughts on how Malaysianâ€™s react to classical music?

What has been your most memorable performance?

There have been quite a number of performances that have affected me. But one, in particular, was in May of last year, I performed the Messiaen TurangalÃ®la-Symphonie with the Juilliard Orchestra. That was in the David Geffen Hall and I had the opportunity to work with the great conductor, David Robertson. The wonderful thing was that it was definitely an amazing piece, even with some parts in it that may seem quite thorny but the orchestra played so well and the ecstatic reception from the audience really warmed my heart. The conductor from this event, David Robertson, is also the conductor of the Sydney Symphony Orchestra and he invited me to play the same piece with him at the Sydney Opera House last November. So that one experience led me to other opportunities, which I am very thankful for.

Another performance that comes to mind happened when I was 12 and played with Neeme JÃ¤rvi, a really esteemed conductor known for having one of the most recordings ever made. It was an interesting concert because I played a Mozart concerto with a few conductors, and he was in the audience. It was for a conductorâ€™s masterclass where he was guiding the conductors.

He came at the end of my performance and spoke to me for a bit on stage and asked to do some improvisation. At the time it was very new to me and I didnâ€™t know if many orchestras or conductors had done this before. Afterwards, he directed the orchestra to play certain notes and I was supposed to improvise a piece to play above that. That was something I had never done before, and even till present, is not something I have ever done with any other orchestra.

How did you get into conducting?

Conducting is still quite new to me. I still feel like there is so much more learning left for me moving forward. The piano is such a solitary instrument and I also donâ€™t play any other orchestra instruments, so every time I hear an orchestra I always love the sound.

When I was younger, at no specific age, I started listening to more symphonic works and I started to also observe how conductors direct or lead the orchestra through the pieces. That honed my appreciation for the art of conducting.

I have conducted a few performances. I premiered my conducting debut when I was 16 in Arizona, Phoenix with the MusicaNova Orchestra. It was on a short piece that I wrote back then, called Nocturne, for about eight to nine minutes. But it was a good experience because it made me get used to not only conducting but also rehearsing an orchestra.

The other collaborations I have had, one was with MPYO at the December Camp in 2017, where we performed two concerts, one in Malaysia and one in Singapore. In Singapore, it was at the Esplanade Concert hall. The latest was with MPO in 2018 on the 17th and 18th of August where I conducted one piece for the opening concert of MPO for their 20th Anniversary.

Where do you see yourself in the next few years?

I still donâ€™t know whether I want to fully become a pianist or a conductor. For me as a musician, I always like to do more than one thing. I cannot get used to just living in the practice room and just practising non-stop, itâ€™s just not who I am. Practising is just one aspect, there is also listening, observing and learning from other people and from my teachers, and also doing a bit of conducting, all of this together makes you a better musician as a whole. Itâ€™s not just that one facet or specific focus, at least that is what I wish to become. To know and improve on every aspect of being a musician.