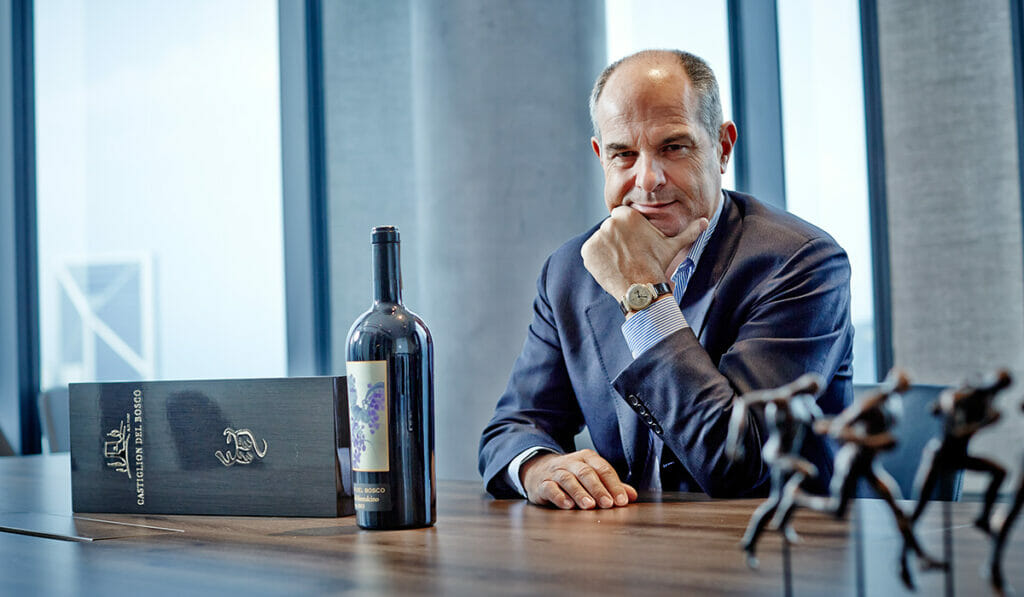 The Peak sits down with Massimo Ferragamo to learn more about Brunello wines.
Tuesday, January 21, 2020 By Christy Yoong

When Massimo Ferragamo, Chairman of Ferragamo USA, first took over Castiglion del Bosco in 2003, his interest was purely vinification. The 2,000ha estate, located north-west of Montalcino in the Val dâ€™Orcia nature reserve in Tuscany, was the fifth largest wine producer in the region. It was also in need of a complete restoration. â€œIt was a bit run down,â€ Ferragamo, the youngest son of Salvatore Ferragamo, founder of the eponymous luxury goods company, remembers. â€œThe first thing we did was build a new winery facility, including a climate-controlled cellar that was large and designed for efficient usage.â€

Cellar space was of particular concern for Ferragamo. Castiglion del Bosco, which had already been producing wines for more than 100 years before he took over, was one of the founding members of the Brunello di Montalcino Wine Consortium. â€œBrunello wines need to be age for at least five years before it can be released, so you need a lot of storage space,â€ Ferragamo explains.

Even as the winery took most of his attention, Ferragamo got the urge to do more. â€œIt was as if the land was speaking to me,â€ he says. The estate came with the ruins of a medieval castle, dating back to 1100CE (the ruins are now the wineryâ€™s logo), as well as a centuries-old village known as Il Borgo. â€œThe buildings had been abandoned and some were even missing their roofs,â€ Ferragamo remembered. â€œTheyâ€™re protected building, however, so we couldnâ€™t do much. Initially, we just wanted to preserve them and stop them from deteriorating.â€

Grander plans, however, crept in and Il Borgo, set on the highest point of the estate, is today the Rosewood Castiglion del Bosco, boasting luxuriously appointed suites, villas with private pools set in lovingly restored 17th- and 18th-century farmhouses, two restaurants and a spa. There is also the only private golf club in Italy, with the 18-hole green spread across 210ha of rolling hills.

While he looks back in satisfaction at all he and his team have achieved, Ferragamo insists itâ€™s not all down to him. â€œPeople look around and say, â€˜Oh Massimo, what fabulous vision you had to do this,â€™ but I say, â€˜No, I was just listening to the landâ€™,â€ he says. And it is the land, the terroir, that more than anything else defines Castiglion del Bosco: all of its 62ha of vineyards are dedicated to Sangiovese, the red Italian varietal that is also the only grape that goes into the making of Brunello di Montalcino, one of the finest and best-known wines in the world.

Since there isnâ€™t exactly a straight line that links leather goods to winemaking, one cannot help but wonder at Ferragamoâ€™s foray into viticulture. â€œWhen youâ€™re chairman, youâ€™re less involved in the day-to-day business. This gives you time to pursue other interests, things that youâ€™ve always thought, â€˜Yes, I want to do that one dayâ€™,â€ he explained.

Of course, there are plenty of diï¬€erences between, say, designing a pair of shoes and making wine. â€œThere is the timeline, for example. Ferragamo works in six-month cycles, while wine-making is years in the making. At Ferragamo, we can tell if a product is successful or not within two weeks after it appears in the store. As for wine, Brunello especially, youâ€™ll only know how good it is after a few years.â€

On the hand, he says, both demand passion and an attention to detail. Additionally, Ferragamo also brought to Castiglion del Bosco the very values that define the family business. â€œI can only try and do things well, and this is something that emanates from my parents and siblings, where you try to work in a certain way. And this is what I have brought to Castiglion del Bosco.â€

He concedes that making wine is a hard task, one with so many diï¬€erent components that need to work in tandem perfectly. â€œObviously, I devote a lot of time to this but I also have a great team that is very good at what they do. Iâ€™m always fascinated when I speak to our winemaker or agronomist, but I also realise it would be impossible for me to do this myself. In that sense, I see myself as a catalyst for a good team â€“ someone to set the goals and find the right people to achieve that.â€

The goal, in the end, is simple: â€œThe wine we make has to be excellent; otherwise, itâ€™s better to just buy and have a good cellar!â€