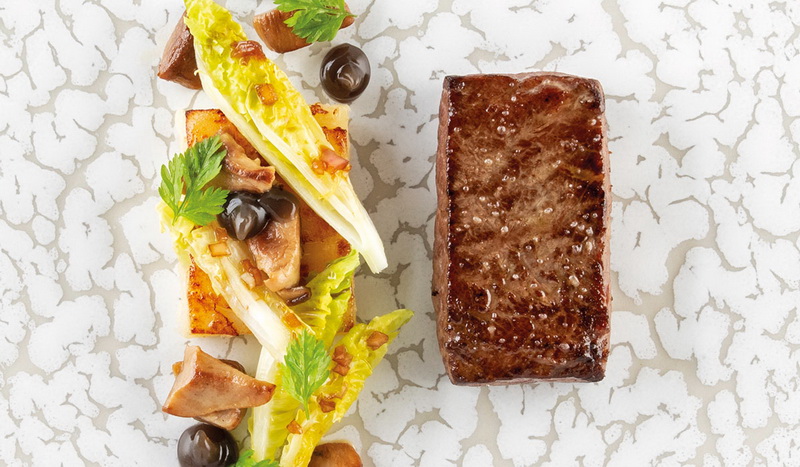 Chef Julien Royer rises to the challenge to
Friday, August 23, 2019 By Editors

As of the writing of this story, the waitlist for a table at chef Julien Royer’s contemporary French restaurant, Odette, stands at about three months. This comes as little surprise, given that the two Michelin-star restaurant recently also clinched the number one spot on the Asia’s 50 Best Restaurants list – knocking out Bangkok’s Gaggan, which had previously held the title for four consecutive years. On Air France’s Singapore to Paris leg, however, Royer’s cuisine is a matter of course.

The topic of airline food might be a dated, low-hanging fruit for comedians, but it is serious business for France’s national carrier, which has a long history of working with renowned chefs as part of its “Oh My Chef!” programme – names on the roster include Anne Sophie Pic of the three Michelin-star Maison Pic; and French-American restaurateur chef Daniel Boulud.

Until the end of next March, Air France will be serving 12 main dishes created by Royer as part of its “Oh My Chef!” series of collaborations. Each dish will be on the in-flight menu for two months before changing, with six created for business class, and six slightly more luxurious ones for La Premiere — the French airline’s equivalent of first class.

The carrier’s collaboration with Royer began when its country manager for Singapore, Nicolas Ricard, first tasted the chef’s food. “I first discovered Julien’s food when he was at Jaan, and followed his career to Odette.” After hosting some very well-received meals for Air France’s clients at Odette, the decision to go with Royer for the collaboration was clear.

Ricard explains: “(French cuisine) is part of our heritage, and Air France has a long history of working with these great chefs. Everybody is more or less buying the same types of airplanes, and there are limited suppliers for airplane seats. Cuisine opens up a much larger world of creativity and possibility.”

With this, Royer joins the ranks of other French culinary greats like Michel Roth and the late Joel Robuchon, both of whom have created dishes for Air France’s long-haul flights departing from Paris-Charles de Gaulle. “It’s a great honour, like if you were a footballer and you were being called up to play for the French national team,” shares Royer.

Julien Royer is the first-ever Singapore-based chef to be on the “Oh My Chef!” programme

Revealed (on the ground) during a press lunch at Odette, Royer’s in-flight dishes comprise modern, luxurious spins on hearty classic French food. They’re not unlike his usual fare, but a little more restrained in their complexity. While recreating Odette’s signatures like its intricately constructed variations of beetroot might be patently unfeasible for an in-flight meal, the dishes that Royer has designed for Air France are no less considered – something straightforward like chicken ballotine is spruced up with crayfish, asparagus gnocchi and Albufera sauce.

There are even plenty of homages and nods to culinary history that travelling gourmands will appreciate. Mushroom ketchup, the more savoury historical ancestor of tomato ketchup, is a condiment for roast beef. There’s even “Apicius” duck leg – roasted duck glazed with honey and coated in spices – served with apples and confit lemons that riffs on a creation by a pioneer of nouvelle cuisine, Alain Senderens.

It’s not as simple as conjuring dishes out of thin air to be replicated and served on the plane though. Putting together an in-flight menu means considering the fact that these dishes have to be produced repeatedly by the catering company, stored, then reheated, and finally served on a metal tube at 10,000m elevation. Royer explains: “You have to approach this with a totally different mindset compared to doing service in a restaurant. It’s more planning, preparing, and logistics.” To do this, Royer worked closely for several months with Sats, which produces a majority of the in-flight meals for flights leaving from Changi Airport.

The first challenge for the chef was to address the diminished sense of smell and taste – which can decrease by up to 30 per cent – that people experience in the plane due to the low pressure and dry air. Dishes were tested and their seasoning adjusted in Sat’s Simulated Aircraft Cabin, an enclosed room that replicates the conditions during a flight: These include the limitations of meal preparation in the galley, service at the seats, and most importantly, the decreased pressure and humidity.

Looking for the right ingredients is also key, since the food is reheated in the plane galley’s convection oven. Says Royer: “We have to consider how the texture of the ingredients will change because the food gets heated at a constant 140°C. For the proteins, you need something with sufficient fat content because something too lean will dry up.

“We tried beef filet, which didn’t work well as it dried up. Anyone with a bit of common sense will understand that we can’t exactly duplicate the food we serve in the restaurant. The idea is to have the flavour profile and the DNA of the cuisine.”

At Odette itself, a dish of grilled scallops with carrot mousseline and aromatic saffron nage comes garnished with pickled onions, fresh herbs and crispy fried sage. In the air, the same dish served in business class comes close in flavour, but is served without the fried sage, which would have turned soggy. Because the dish is pre-prepared, with all its elements reheated on the same plate, individual ingredients tend to bleed into each other a little, like rounds of scallops picking up some flavour from pickled onions.

In first class though, the experience is a little more rarefied. Ingredients used are a little more luxurious, with produce like cod being served alongside Paimpol “coconut”, a prized white bean with a protected designation of origin (meaning that this particular produce, grown in this area, can be labelled as “coco de Paimpol”) that’s farmed in Cotes d’Armor in Brittany, France. Plates too, are constructed a la minute by the cabin crew, so the meal is presented with more finesse, without the risk of condensation watering down a sauce or fresh herbs wilting in the heat.

Predictably, much attention is given to the on-board wine list for France’s national carrier, which serves over 800,000 bottles of wine and 750,000 bottles of champagne on its flights every year. Great food, well-curated wines, and a very tempting selection of boozy, post-meal digestifs – which includes everything from calvados to pear eau de vie and Chartreuse – can only contribute towards better sleep, perhaps the most-appreciated luxury on those long-haul flights.