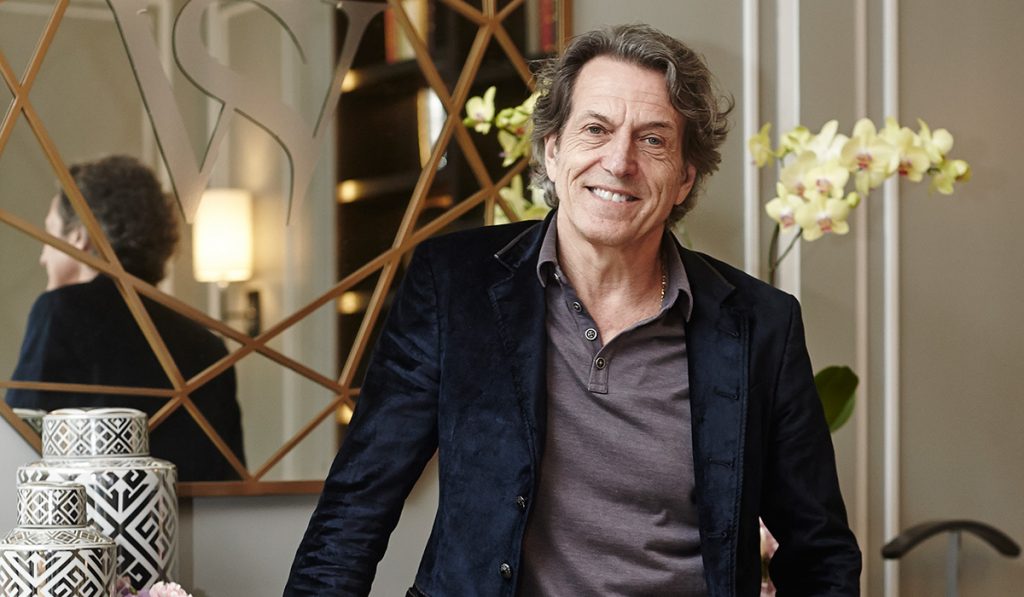 The Peak sat down with Stephen Webster, founder and creative director of his eponymous jewellery brand, to talk about finding his calling in craftsmanship and building Britain’s biggest contemporary jewellery brand.

Tell me how you got started in the jewellery business. Was it something you’ve always wanted to do, or sometime that you discovered along the way?

At 16 years-old, I felt I could only do something creative but I didn’t know what that would be. So I went to art school because that’s where you went if you were creative, thinking I was going to go into the fashion business. I was only 16, I didn’t know much but thought ‘I don’t know if I like this’, partly because it was full of girls and sewing machines, and I had been in an all boys’ school and felt a bit uncomfortable. Then I happened upon the jewellery workshop, and thought ‘wow these people are making treasure and it feels like something I could do’. And I did and I loved it, I really loved it. That started my 44-year career in jewellery.

Not a lot of people can say that they’ve found their life purpose at the age of 16. Do you think it’s a lucky find?

Yea, I think I was lucky. Now with my two daughters, I want them to get as much experience as they can. Our oldest daughter is 27 and she’s just started working with us. She’s experienced a bit of life, she’s been in Berlin for four years making films and now she’s bringing that skill to us. You let them make their choice. I would much prefer that than feeling like you have to do something because the chances of finding exactly what you want to do at 16 is slim. I loved it from the first minute, and did a five-year apprenticeship which didn’t give me time to really question it. Had I hated it I would have stopped but all I thought about was just getting better and better. Then I found myself at 21 thinking what I’m really good at is jewellery and then it’s down to finding your place in the industry. Well, I’m lucky that my place has offered me so much variety. I couldn’t have imagined that at 16. How could you? It takes a lifetime.

Where do you usually find your inspiration when designing a new collection?

I can’t really define that one place, it just comes to you. Every now and again, you get a push thinking of where we’re going next. I think right now we’ve got so many opportunities. They are coming to us because of who we are, where we’re at. The fact that we’re known now as not just a jeweller, but as a creative jeweller lets us apply that creativity in different ways. It’s a really nice place to be. My team are incredibly creative, all they need from me is a direction, and then they are more than able to be creative within the Stephen Webster universe. One thing that is quite important as you get older is you’re not scared to learn about something you don’t necessarily understand and then applying your aesthetic to it.

Whether it’s getting hands-on with crafting each piece of jewellery or making that first sketch of a new design, what is your favourite part of the process?

For me, it’s first of all the materials. I know that that’s one of my strengths. Just looking at a material and thinking: ‘right, we can use that.’ Right now, I’m taking glass, having it blown in a colour that we choose, engraving it and then filling it with fine silver, and crossing it over into becoming a piece of Stephen Webster glass. The engraving is not that different to engraving gold or gemstone, so it’s applying things that I understand into a material that I have never worked with. It’s satisfying, especially when you start seeing it come together and you think wow, that’s amazing. I can now see these beautiful water jugs that somehow fit into the Stephen Webster world, and I’m probably as excited about that water jug as I am about a new pair of earrings.

Storytelling jewellery is how you’ve described your creations. With the Fish Tales collection, you’ve literally written a book to go along with it. How did you come up with the concept?

We’re doing quite a lot at the moment to understand a bit of what it was, 25 years ago, that led to where we are today. I didn’t launch it with a story, I gave it a name, I called it Crystal Haze. People asked what it means, and so you start storytelling. You could wear it on one side of the room and people would come over and ask about it, so the person wearing it becomes part of the storytelling. Some of the stories have been so big and complicated, but they’re always fun. I’ve written books and a short play about jewellery and I don’t really think about it anymore other than I just know that it’s what people find the most exciting. The worst thing for me is launching a jewellery collection, saying it’s inspired by something and ending the story there. I want it to feel fun, exciting and for the wearer to want to continue the story.

One thing that you’ve emphasised on is the fact that you’re sticking with traditional British craftsmanship techniques and balancing these traditional techniques with contemporary design. Why do you put so much emphasis on this?

I’ve done that right from the beginning because the one thing I knew I was good at was being a craftsman. I would take an idea and say I want to incorporate what I learned as a craftsman. So from really early in my design days, I’d start pulling on that because I understood it. Then you realize that these techniques are amazing but the final products don’t have to look the way they appear. Last year at COUTURE Las Vegas, we won the innovation award for our cameo earrings that didn’t look like a cameo, despite everything about the technique making it a cameo, only because it didn’t have a woman’s silhouette. That’s why I love to take a technique and work with someone who’s really good at that skill and try to make it look completely different. We’ve tried it a lot with stone cutting, as well as with jewellery engraving to make it look modern.

What is your favourite collection that you’ve worked on so far?

Well, just the sheer indulgence of it, it’s probably Seven Deadly Sins cause it was so much fun. I created this idea of working with the Seven Deadly Sins and what it means today. All I had was seven rings, but it was such that each one was so massively detailed, like Wrath was this woman’s hand strangling what looks like maybe a husband or a boyfriend’s heart. We really enjoy making it, the promotion of it, we thought it was something else and that was a lot of fun.

But the collection that changed my life and I love, has to be Crystal Haze. I know it’s only a concept, but the feeling that we own it, it was really different and it caused a lot of controversy within the industry. It was very complicated but looked very simple, and maybe that’s the key to good design.

You’ve talked a little about your glass work. What else is coming from Stephen Webster that we can hope to see soon?

The storied jewellery is going to carry on. I can already see my daughter is quite a storyteller. They’ll be different and I want them to be different because you got to keep surprising people. For me I think more than ever, I feel like I have to use my real skills with the gemstones and materials. So bringing something new to the table in that way and also applying ourselves with things that aren’t jewellery. That’s such a big thing for us and I can see it. What’s amazing is that right now with my pop up shop in Bergdorf Goodman, it’s not only got my jewellery but I’ve done the wallpaper, I’ve done the mirrors, I’ve done all the homeware and I’m looking at this expanded world that people are responding well to. We want that, to surprise them but in a way that is a natural expansion of us, something that’s definitely Stephen Webster.