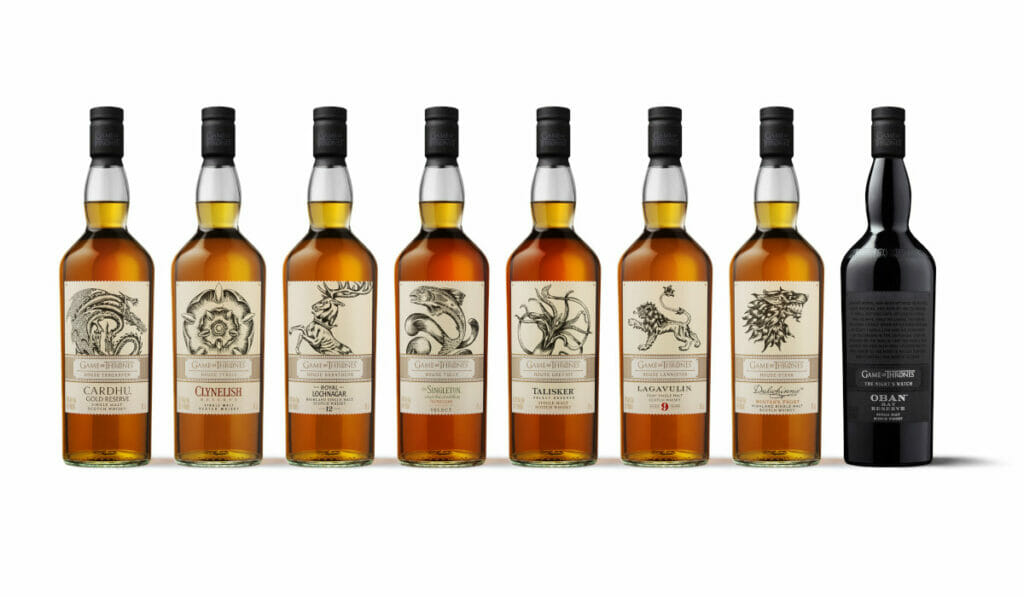 With the premiere of the final season of HBOâ€™s critically-acclaimed fantasy series Game of Thrones this week, Diageo teams up with HBO to celebrate the occasion with the launch of the Game of Thrones Single Malt Whisky Collection.

Eight scotch whiskies debut to commemorate all seven Houses of Westeros as well as the Nightâ€™s Watch. Each House and the Nightâ€™s Watch is paired with a scotch that matches them, to create a collection that not only represents the Houses of Westeros and the flavours of the Seven Kingdoms, but also showcases the variety of whiskies that can be found across the Scottish landscape. These eight whiskies make up the Game of Thrones Single Malt Whisky Collection and joins White Walker by Johnnie Walker in Diageoâ€™s range of Game of Thrones inspired whiskies.

Each House is represented by a different Scottish distillery, and highlights include the Cardhu Gold Reserve scotch that represents House Targaryen connected by the fiery spirit of female leadership, as the Cardhu distillery was pioneered in the 1800s by Helen Cumming and her daughter-in-law Elizabeth in an era when whisky was a male-dominated industry. House Stark is represented by the Dalwhinnie Winterâ€™s Frost, brought together on the basis of the frigid cold that surrounds Winterfell. Dalwhinnie is one of the highest distilleries in all of Scotland with extreme weather conditions much like that of Winterfell, resulting in a honeyed sweetness and spiced warmth to the Winterâ€™s Frost whisky which is best served chilled or over ice.

The Game of Thrones Single Malt Whisky Collection retails from MYR2,799 and includes eight bottles of with House of Westeros logos, of which seven are brand new liquids previously unsold in the region, as well as a bottle of White Walker by Johnnie Walker.

So, raise a glass of personalised House whisky for every fallen character as you watch the final season of Game of Thrones this weekend, and youâ€™ll be in for a good time.

The Game of Thrones Single Malt Scotch Whisky Collection is available in Malaysia at Stay Thirsty only. Discover the collection and order a set of your own through their website.