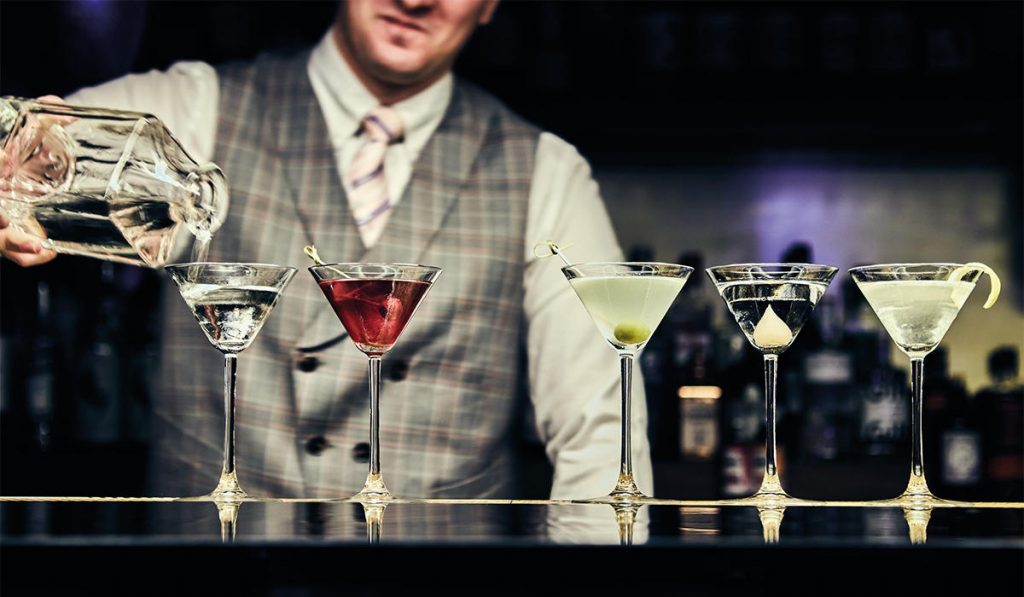 Plus, five well-known variations on the king of cocktails.
Monday, December 10, 2018 By Editors

For a drink that has only two ingredients – gin and vermouth – the dry martini’s enduring legacy is impressive indeed. It all began around the mid-1800s, when bartenders first noticed the potential of vermouth as a cocktail component. They started mixing it with everything, from whisky (creating the Manhattan) to brandy (for the lesser-known Metropole), but it was its pairing with gin that would eventually rule over all. And in the hands of the famous, both fictional and otherwise, it looked the epitome of elegance.

The martini’s simplicity is its greatest strength. From a bartender’s point of view, it’s a true test of skill. “Most of the time, there are only two ingredients. You don’t have anything to hide behind,” says Giovanni Graziadei, principal bartender of Jigger & Pony. “The temperature, the dilution, the quality and ratio of the ingredients – you can taste all of that in one sip.” For the person ordering one, it shows discernment, as preference is mirrored through the choice of gin (Old Tom or London Dry?) and vermouth (fruit-forward or herbal?) and how much of each to include. To order a martini is to announce that your palate has long since graduated from cloying dessert-like drinks and that it knows better than the barman what it wants.

Beyond that, the martini is endlessly customisable, though sometimes to its detriment. There are far too many cocktails with the “-tini” suffix that have little relation to the original, aside from the glass it’s served in. “No matter how you play with a classic martini, it should still be a dry drink with flavours that are clean and subtle, and the new flavours should never overpower the two basic ingredients,” advises Graziadei.

5 variations of the martini

The “true” martini as we know it today gained popularity in the late 1880s, when there was an overwhelming inclination for anything that was dry, from champagne to gin. One of the most popular recipes for the classic martini comes from American bartender Charlie Mahoney in 1897, which calls for half gin, half dry vermouth and a dash of orange bitters.