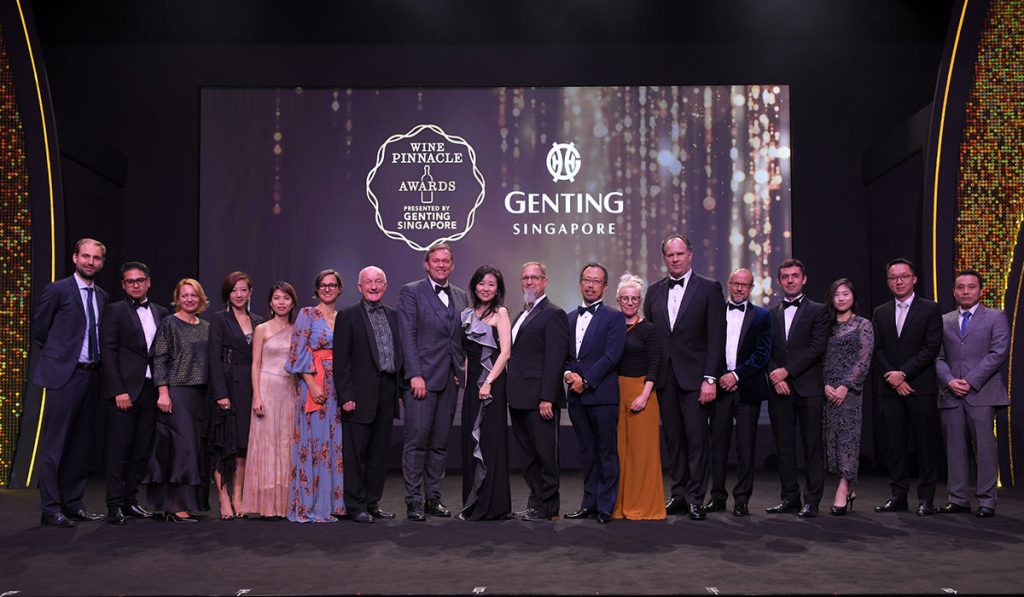 Resort World Sentosa’s many heights of achievements includes their first-ever Wine Pinnacle Awards. Hosted in conjunction with The Great Wine & Dine Festival held recently at Resort World Sentosa, Singapore, the festival is the first of its kind within ASEAN to conduct a B2B market space within the wine industry as well as to orchestrate an award ceremony held recently with an unbiased appeal to truly celebrate the best wines produced globally.

The Wine Pinnacle Awards hosted a day before the festival, played to a raptured crowd of approximately 300 wine aficionados. A special main committee was chosen to handpick a jury consisting of 54 members to nominate the wines that were in the running. Headlining the festival were Jeannie Cho Lee, the First Asian Master of Wine, Andreas Larsson, Best Sommelier of The World in 2007, Doug Frost, Master of Wine and Master Sommelier, Kenichi Ohashi, Master of Wine, and Oz Clarke, Wine Writer and Television Presenter representing the main committee.

The inaugural Wine Pinnacle Award set itself apart from its competitors by relying solely on wine submissions, making it the world’s first-ever nomination-based wine award. A total of 27 categories were created to celebrate the diverse flight of wines from the elusive but growing market of Best Chinese Red which was awarded to Ao Yun Winery from Yunnan China, to the Best Organic/ Natural Wine Of The Year where Domaine Marcel Lapierre of Cuvée Marcel Lapierre winery of France took home the title. The grand finale of the entire night rested on the laurels of the Grand Jury award. Through a unanimous decision made by the main committee, the humble Domaine Coche-Dury won in a landslide with the winery creating consistently great, age-worthy white Burgundy that still operates on a small family-run scale despite the international acclaim it has garnered.

The next few days saw the official commencement of the ‘Great Wine & Dine Festival with an average of 30 wine stands and 14 sake pop-ups orchestrating the first-ever B2B wine-focused conference within ASEAN. Guests and interested clients were invited to taste test the flight of wines available from bottles of organic wines to heady and intense Spanish and Australian wines, it was the ideal networking system for businessmen and oenophiles alike. With booths opened up by many famous Singaporean restaurants such as Fratelli Trattoria, Table 65, TEPPAN by Chef Yonemura, Lobsterdamus and more, hours could be spent wiling away sipping on rich alcohol and dining on even richer foods.

Sake has recently begun to gain a large following within Singapore and with 14 different brands showcasing the best pour, it was easy to follow the addiction. From the light sake’s such as Gassanshuzo Junmaiginjo from the Gassan Sake Brewery meant to emulate the taste of fresh snow to the elegant and fruity aroma of the Sakuramasamune brewery’s Kinmare Junmai Daiginjo 40 which is made with Yamada Nishiki rice and Miyamizu water, in Yokawa-cho, Miki City.

Cutting the ribbon on Wine Awards in ASEAN, the Wine Pinnacle Award and the follow up Great Wine & Dine Festival opens up the region to a plethora of gastronomic delights that work well with Southeast Asia’s own strong food culture.