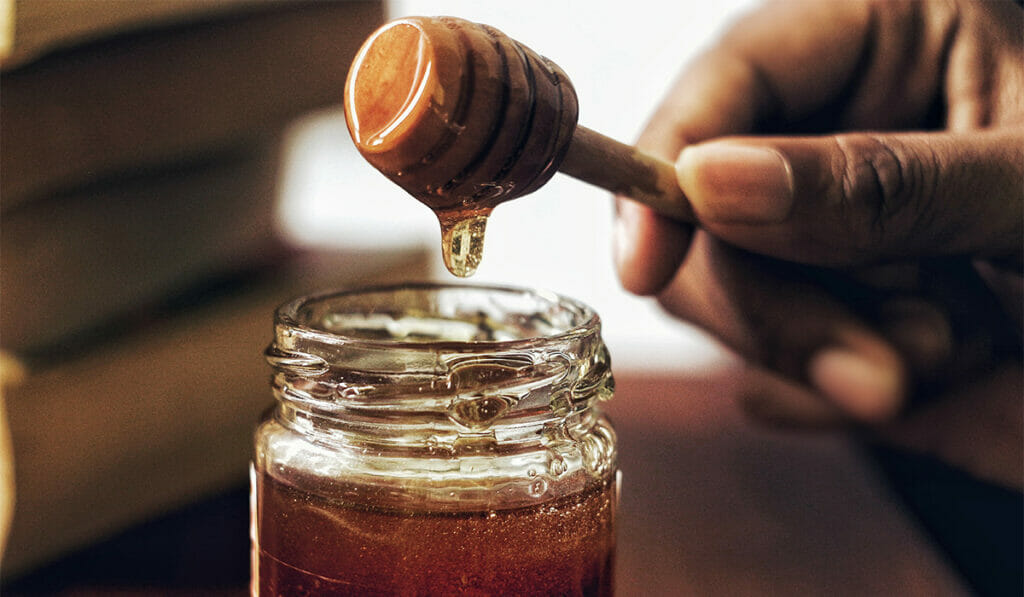 Itâ€™s not just wine that pulls terroir into its flavour profile â€” honey is also one of the purest ways to taste the land.
Thursday, September 5, 2019 By Editors

Used for thousands of years as a sweetener, medicine, beauty treatment and even a mode of taxation in ancient civilisations, honey is natureâ€™s great multitasker. And itâ€™s all thanks to the hard work of bees that are really as busy as the idiom goes.

Once a honeybee returns to the hive with its nectar harvest, it regurgitates it into another beeâ€™s mouth and the process is repeated until the partially digested nectar is deposited into the honeycomb. The bees then fan it with their wings until most of the water is evaporated, creating the syrupy thickness weâ€™re familiar with.

A special enzyme in the beesâ€™ stomachs breaks the nectar down into gluconic acid and hydrogen peroxide, and itâ€™s this combination of acidity, low moisture and hydrogen peroxide that gives honey the antibacterial properties that help cure everything from coughs to cuts. But only the raw stuff will do. And, thanks to declining bee populations and rising demand for natural sweeteners contributing to a steady increase in honey prices, the real deal has never been more precious.

(Related: Caviar Colony has a species of sturgeon exclusive to themÂ )

Most commercial honey has been pasteurised, which involves applying high heat to destroy yeast so as to extend its shelf life and create a clearer appearance and smoother consistency. Unfortunately, research suggests that pasteurisation also kills o a lot of honeyâ€™s natural nutrients. Not to mention the lack of distinct flavour and aroma profiles that come from processing regular honey, compared to leaving it to nature to imbue the honey with the flavours of its surroundings.

But how honey ultimately tastes depends on the flowers from which the bees harvested. Lavender honey will have hints of lavender, buckwheat honey will be dark and malty, and manuka honey will probably extend your life if its many devoted fans are to be believed.

Like wine, honey connects our palates to the land itâ€™s cultivated from. This is why enthusiasts prefer monofloral honey, or honey that comes from only one type of plant, to polyfloral (or wildflower) varieties. Eat it or apply it, thereâ€™s a whole world of flora to explore with natureâ€™s liquid gold.

What Do The Grading Systems Mean?

UMF stands for â€œUnique Manuka Factorâ€ and itâ€™s a quality mark that ensures the presence of Leptosperin, Methylglyoxal and DHA. All three of these signature compounds must be present in the honey to earn the rating. The higher the grade, the greater the presence of those attributes. UMF5 to 9 is considered low; the honey needs to be rated at least 10 to have any therapeutic use. Anything above 16 is superior.

The MGO rating focuses solely on the Methylglyoxal content of the honey. While MGO is found in most regular honey, the quantities are small. Manuka honey by contrast contains more than 100 times the MGO. If youâ€™re used to seeing the UMF rating, note that UMF10+ is the equivalent of about MGO 263, and UMF20+ has minimum MGO 829.

Created and used exclusively by company Wedderspoon and approved by New Zealandâ€™s Ministry for Primary Industries, KFactor is a completely different beast. It doesnâ€™t measure MGO (yet) but focuses on pollen percentages to rate its purity. It also measures PH levels, live enzymes, antioxidant levels and more. KFactor 12 means 65 per cent of the pollen is from the manuka plant, while KFactor 16 and 22 represent 75 and 90 per cent respectively. The main issue with using pollen counts is that manuka pollen can be easily mistaken for pollen from related species like the kanuka tree.

(Related: Chef Julien Royer Tells How He Made Fine Dining Possible At 30,000 Feet Up In The SkyÂ )

The True Honey Co has recently unveiled Rare Harvest, the worldâ€™s highest UMF-rated manuka, at UMF31+. Thanks to challenging growing conditions in 2017, a single, remote manuka block was able to produce a particularly potent nectar, resulting in this â€œvintageâ€ honey. Each of the 1,000 bottles produced is topped with a hand-turned New Zealand timber lid, numbered by hand and signed.

Thereâ€™s only one man taking care of Singaporeâ€™s first honey and bee rehabilitation company. At Durban Road-based Nutrinest, 53-year-old Xavier Tan keeps bees, conducts educational workshops and can even be called upon for humane bee removal services. But most rewardingly, he shares the sweet taste of Singapore through the local honey he harvests from his hives.

Trigona bees are a genus of stingless bees that protect their hives by storing their honey in little pots the bees make from beeswax and propolis. The resin-like propolis is known to have antibacterial, antiviral, antifungal and anti-inflammatory properties, thus infusing the honey with a host of benefits. Trigona honey is low in sugar and has a slightly sour taste.

Native to this region, the Apis cerana beesâ€™ hives are often found under cinnamon trees in Malaysiaâ€™s forests. The honey is extracted, filtered and bottled with no further processing, once it has matured. Cinnamon is loaded with antioxidants and can help improve sensitivity to insulin to prevent diabetes.

Apis cerana bees are also known to pollinate the small, yellow flowers of the bitter gourd plant. Bitter gourdâ€™s numerous benefits include the ability to reduce blood sugar and decrease cholesterol levels but those who are just looking for an unusual honey will be rewarded with a complex flavour with a slightly bitter aftertaste.

The tea tree, like the manuka tree, is part of the eucalyptus family and the antibacterial properties of its oil need no introduction. Research from Cardiff University has suggested that the honey can also be useful as topical agent. It is also recommended to ease coughs, colds and runny noses.

Wouldnâ€™t you like to know what our rainforests taste like? Besides satisfying the terroir-obsessed, this multi-floral honey is said to be especially good for digestive health. One customer claims it cured his acid reflux and he no longer suffers heartburn after consuming spicy foods.

(Related: Wine and mooncake pairings for a boozy Mid-autumn Festival)

The rarest honeys to try.

Malaysiaâ€™s Tualang honey may be more exotic to our friends in the West, but make no mistake, this is a challenging honey to harvest. Tualang trees, which are also found in the Philippines, Thailand and Indonesia, can grow as tall as 88m so honey hunters arenâ€™t just risking stings from the worldâ€™s largest honeybees, but also a hefty fall as they use only ropes and handholds to get up there. The nutritious jungle honey is packed with antioxidants and anti-inflammatory agents.

Kiawe trees can flower throughout the year so itâ€™s not seasonality that makes Hawaiiâ€™s famed white honey rare and sought after â€“ itâ€™s timing. Kiawe honey naturally crystallises much faster than other honeys, creating a honey thatâ€™s creamy and almost white in colour. This means the harvest needs to be carried out before it crystallises in the comb (as extracting with heat will destroy its colour and flavour) but not so early that the honey ends up fermenting. Hawaiiâ€™s booming tourism and resulting destruction of natural kiawe tree groves may increase the honeyâ€™s rarity in the near future.

Scotland and Irelandâ€™s Heather honey is only for the most dedicated beekeepers, as the heather plantâ€™s flowering season is short and coincides with the hivesâ€™ natural decline as colder weather sets in. To prevent the decline, beekeepers have to introduce a new queen bee to stimulate hive growth, and then bring only the most vigorous hives to the boglands to brave the unexpected chill. Bee mortality rates are also higher because of the poor weather. Heather honey is intensely aromatic and is a key ingredient in Drambuie whisky.

The Himalayan cousins of the giant bees that make Tualang honey are responsible for making eastern Nepalâ€™s hallucinogenic honey. This effect comes from the pollen of rhododendron trees, but claiming that honey requires scaling cliff faces without modern gear that might hinder climbing agility and ability. As such, the dying tradition is largely restricted to the tribes located near those cliffs. No more than two teaspoons are recommended for consumption, and it is used by the locals as a pain-reliever.

When it comes to health-boosting honey, New Zealandâ€™s unique export tops the list. Hereâ€™s what you need to know about manuka honey.

What makes it so special?

All honey contains hydrogen peroxide, which contributes to its antibacterial activity. Unfortunately, much of it can be lost during the extraction process because of hydrogen peroxideâ€™s sensitivity to heat. It even breaks down once exposed to an enzyme found in saliva and blood. Manuka honey doesnâ€™t suffer from these weaknesses because it has a high amount of methylglyoxal (MGO), making it far more resistant to heat and breakdown. This is known as non-peroxide activity (NPA).

Why is it so expensive?

Itâ€™s difficult to make for a number of reasons. First of all, the flowering season for the manuka flower is only four to six weeks, and weather conditions need to be perfect. If itâ€™s too cold, the flowers wonâ€™t bloom or the nectar wonâ€™t flow, and too much rain will wash the nectar away.

And interestingly, the bees themselves arenâ€™t the biggest fans of the flower. â€œManuka flowers are very small and the nectar is deep within the flower, so bees have to work hard to extract nectar from them; other flowers are easier to collect from so bees would prefer those,â€ explains Vicki Febery, marketing manager of New Zealandâ€™s Taku honey. She adds that the time it takes for a typical hive to collect 20kg of manuka can be used to make 100kg of clover honey by comparison.

Brands like Taku have to helicopter their hives into the mountains, where no other nectar or pollen sources can be found so that the manuka honey extracted is pure.

This means brands like Taku have to helicopter their hives into the mountains, where no other nectar or pollen sources can be found. â€œIf there is anything else around, the resulting honey will be diluted with other things.â€