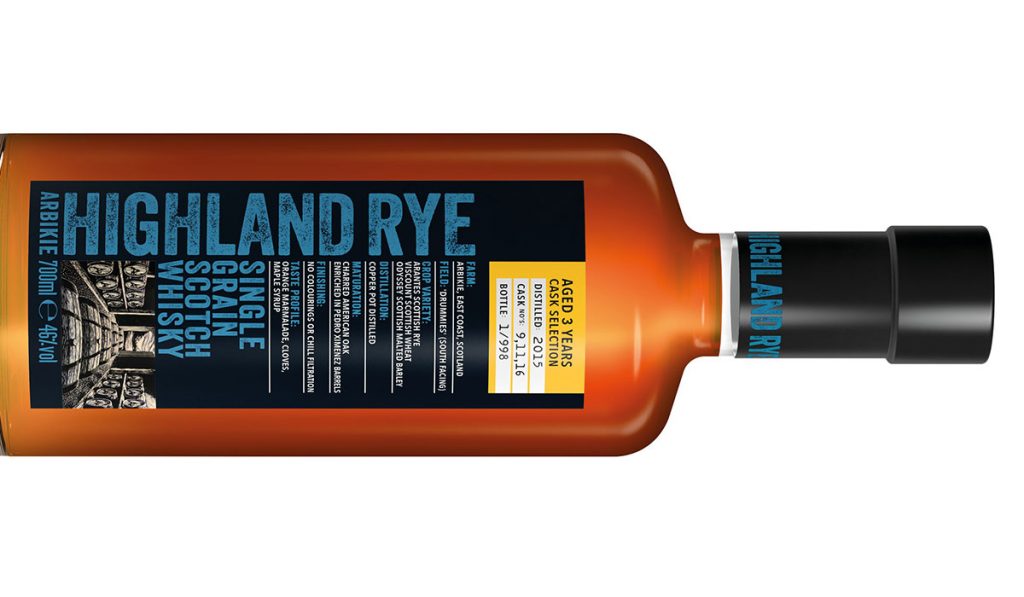 It’s not just North America that makes whisky from rye these days.
Tuesday, March 12, 2019 By Editors

Rye whisky – a spirit rivalled only by bourbon as the quintessential American tipple. That it’s enjoying a revival stateside after almost vanishing as a result of Prohibition is not news, but the fact that distillers in Europe are taking an interest in the grain is.

One of the most surprising champions of rye on the Old Continent is Arbikie, which has recently launched Scotland’s first rye whisky in 100 years. “We are all about field to bottle, provenance and sustainability, and as a single estate distillery in Scotland, we produce only what we can grow,” shares distillery co-founder John Stirling.

Distillation of Arbikie’s Highland Rye Single Grain Scotch Whisky began in 2015 and consists of rye, malted barley and wheat. (In the US, rye whisky is legally required to be made from a mash at least 51 per cent rye. There is no such rule yet for rye whisky in Scotland, but Arbikie uses 52 per cent Arantes rye.) The whisky was matured in first-fill charred American oak casks before finishing in Pedro Ximenez casks. Rye whisky is typically a little sweeter and spicier than malted whiskies, and Arbikie’s has a taste profile of orange marmalade, cloves and maple syrup.

“Records show that rye was used in Scotch whisky production until the 19th century and it is this tradition we have revived using rye grown on our estate. Bruichladdich, Inchdairnie and others are all set to follow,” Stirling says.

It’s about time, because the rest of Europe has already picked up on rye’s wonderful possibilities. “I’ve always known I would open The Oxford Artisan Distillery as a rye distillery,” says co-founder and master distiller Cory Mason, who opened the distillery in the UK in 2017. “To me, rye is gritty, real and a bit punk. If single malt is like a cognac, then rye is more like an armagnac – rough around the edges, a bit more hardcore, but still a stunning product in its own right.”

It’s not just adventurous young distillers that are pushing the trend. As the high-end cocktail scene advances, so does demand for a well-made classic; you can’t make a proper Sazerac, Manhattan or Vieux Carre without a decent rye.

Mason adds that being unbound by expectations makes it exciting for non-American distillers to experiment with rye spirits. “Taking inspiration from the US, UK and Europe, it’s an opportunity to redefine a category.”

AGAINST THE GRAIN
Ryes to try across the pond.

Finnish rye makes great bread but it also makes great whisky. Kyro Distillery Company uses wholegrain northern rye to give its whisky more spice and fullness, but it is mellowed by honey and vanilla notes from American white oak.

Toad works with a leading archaeo-botanist, and is the only distillery to use genetically diverse populations of ancient heritage grains. Its Pure Rye Spirit has been triple- distilled and aged briefly in American oak, leading to a spirit with aromas of sandalwood, vanilla and pralines, and a palate of cinnamon and toasted grain.

Made from 100 per cent rye and aged for a minimum of 100 months, the whisky has a perfume of citrus fruit, spice, honey, vanilla and oak – notes that are mirrored in its flavour profile. Expect a long and peppery vanilla finish with a touch of oak.

After inheriting his father’s dairy farm in 1990, Johann Haider decided to convert it into a distillery, making it Austria’s first whisky distillery. Since rye was still growing on the farm, its rye and rye malt whiskies are its signature products. The sweetness of the Original Rye Whisky makes it an ideal after-dinner dram.

Established in 2017, Germany’s first rye whisky distillery already has four products based on the team’s original recipes. One to try is the Stork Club Straight Rye Whisky, bottled at 55 per cent ABV and the Double Gold medallist at last year’s San Francisco World Spirits Competition.

Stauning takes pride in its malted rye products, not just because they’re delicious, but because rye is notoriously hard enough to handle without complicating it further with wetting and malting. The whiskies are young, all of them with a minimum age of three years, but have a complexity that belies their age.