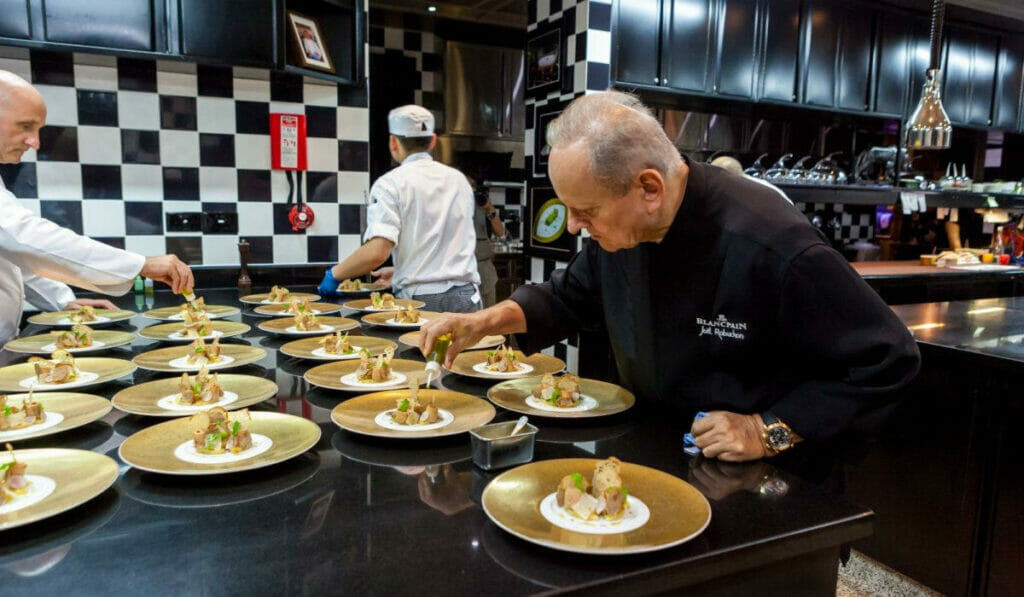 With more than 30 Michelin stars under his name, Joel Robuchon might be known to the masses as the chef with the world’s most number of stars. But the legendary master’s influence goes beyond awards and titles.

Born on April 7, 1945, to a long line of chefs that can be traced back to the 1700s, Joel Robuchon has French cuisine in his blood. And he poured his soul into elevating it. Widely considered as the most influential chef in the post Nouvelle cuisine era in the 1980s, he has mentored generations of chefs including the likes of Eric Ripert and Gordon Ramsey.

Robuchon has also influenced generations of chefs with his distinct culinary style – one that puts the spotlight on the produce through crafting sophisticatedly simple dishes out of just handful of ingredients handled with fiercely precise execution.

Every time a chef talks about good produce being the cornerstone of his cooking; every dish meticulously plated in that distinctly ornate and delicate style; every scoop of silky potato mash you savour at a fine dining restaurant – is a tribute to him.

Singaporean chef Jason Tan of Michelin one-Michelin star restaurant Corner House speaks of how his year working at Joel Robuchon Restaurant in Macau has formed his view on French cuisine and the ways of the kitchen: “He expected military precision: if a dish asks for four flakes of salt, you do not put five. But through setting sky high standards for the team, he made us work towards excellence.”

Robuchon celebrating the art of living well and eating healthily in this 2014 book.

Indeed, the French master chef’s legacy lives on not just in the dozen restaurants around the world bearing his name (the Singapore outposts of Joel Robuchon Restaurant and L’Atelier de Joel Robuchon, which he visited three times annually, recently announced its closure). The culinary giant – who was named chef of the century by the Gault-Millau restaurant guide in 1989, and again by the Culinary Institute of America in 2011 – was also in the process of setting up Swiss hospitality school Institut International Joel Robuchon, slated to open in 2019.

Robuchon has also touched the lives of many others simply by being a generous soul. Tan recalls: “He would always greet every single person when he comes into the kitchen – everyone from the head chef to the dish washer. He was feared, but also loved and respected.”

Singaporean restaurateur Lynn Yeow-de Vito, who has known the chef on a personal level, recounts how the kindly figure always remembers to send her young children chocolates for Easter. Yeow-de Vito says: “He might be this larger than life character in the industry, but is a very genuine person who remembers little personal details of the people around him, always ready to take a bullet for the team – who love and respect him like a papa; and for his friends, too.”