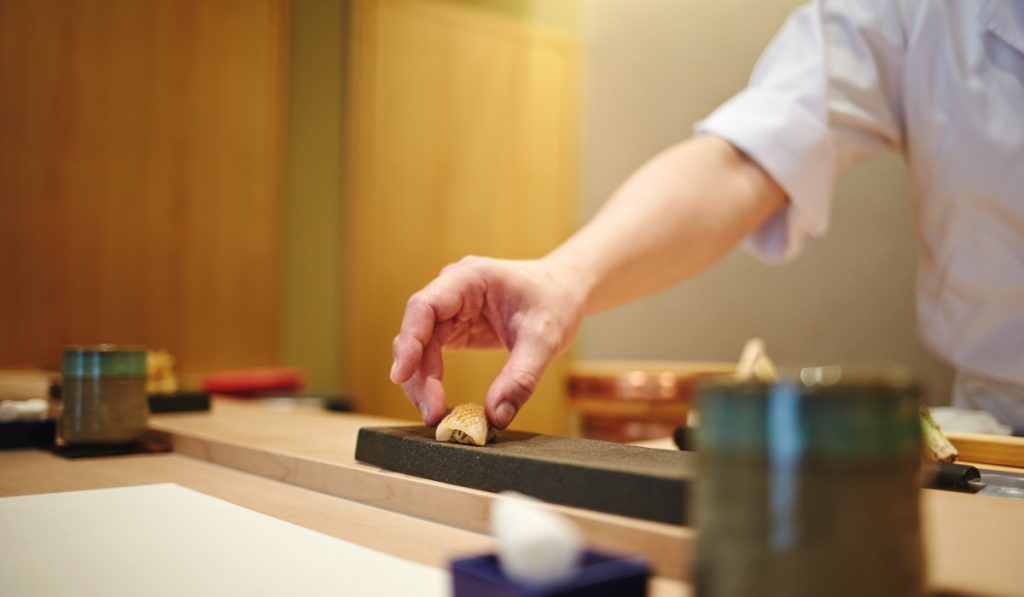 Master the Art of Ike Jime

Although sushi has taken different forms through the centuries, its focus has always been preserving fish in the best way possible. This is apparent in the way Japanese anglers and chefs go the extra mile by dispatching their catch via ike jime, a method which paralyses and kills a fish quickly and maintains the quality of its flesh. The process minimises buildup of lactic acid, which is produced in a fish’s muscles when it struggles before it dies and can result in meat with a sour taste and mushy texture. Here’s how to execute this traditional method.

STEP 1: KILL THE FISH
Deliver a sharp blow to the top of the fish’s head with a spiked tool, about two inches above the eyes. If done right, the fish will stiffen and its mouth will go slack. The move is executed swiftly so the brain does not have a chance to fire stress signals to the rest of the body.

STEP 2: SLIT THE GILLS
Fish blood is where fishy odours originate. Insert a blade between the gills and slice in an upward motion toward the mouth. This cuts a major blood vessel, and will ensure effective draining of the fish. The fish is then left head-down in a bucket of sea water.

STEP 3: SEVER THE SPINAL CORD
Make an incision about two inches from the top of the tail (where it meets the body). Insert a thin (1mm-thick) wire into the neural canal, which runs the length of the spine. Push the wire towards the head until it can go no further – this is a vital step that destroys the fish’s nervous system and prevents rigor mortis, which can lead to mushy meat.

STEP 4: BLEED IT OUT
Remove the wire and leave the fish in a large cooler of seawater filled with ice to chill the fish while letting it bleed out. Zip-tie the tail to the side of the fish, so that it doesn’t flop over and obstruct bleeding from its severed spine.

Fatty tuna and sea urchin might share top spot in high-end sushi restaurants today, but there is a sea of other varieties with plenty to offer too.

01 TORIGAI (JAPANESE COCKLE)
Its inky purple foot gives this shellfish its name (it looks like a bird’s beak), and is also an indicator of how fresh the clam is. The more vibrant the colour, the fresher and sweeter this thick cut of meat. Best enjoyed from spring to summer.

02 SAYORI (HALF BEAK)
Long loved by the Japanese as a popular ingredient in Edomae (nigiri-style) sushi, the appearance of half beak fish in sushi joints signifies the start of spring. This slender fish has a slightly pungent odour, but yields deeply flavoured slivers of meat. Traditionally, it is served with sakura denbu (pink fish floss), which adds a touch of sweetness.

03 IKEBE YAMAME (GOLDEN ROE)
Most diners are familiar with ikura, but these golden eggs are from smaller Japanese salmon that do not go out to sea. Instead, this fish is farmed in mountain areas for its roe. Slightly sweeter in taste than ikura, this golden roe is only in season for three weeks, from the end of November.

04 KAWAHAGI (FILE FISH)
The firm flesh of file fish belies its light flavour, and it gets its name from its tough skin, which was dried and used to finish wooden boats in the past. While these qualities make it an unpopular choice here, many Japanese enjoy this sturdy catch. It’s often served topped with its own liver as the latter adds an intense sweetness.

05 AKAGAI (ARK SHELL)
A staple ingredient since Edomae sushi came into existence, the red blood of the akagai gives it a vivid colour and a more intense sweetness than typical greenblooded shellfish varieties. Chefs usually slice the clam open slowly, so that it unfurls in a way that mimics a flower blooming.

06 MEJI MAGURO (BABY TUNA)
In the sushi pyramid, tuna is at the apex: most in demand by diners and a benchmark of a restaurant’s merit. The flesh of this young fish has some marbling, but is leaner than its fattier adult counterpart. It is best devoured during winter, paired with citrus-based toppings like ponzu or yuzu zest to help cut through its richness.

07 IKURA (SALMON ROE)
Salmon roe might appear in most sushi restaurants today, but these glistening red pearls were only introduced as sushi toppings after World War II. Each egg is usually carefully individually placed in a soya sauce and rice wine marinade, to seal the umami liquid within its delicate membrane.

08 KAMASU (JAPANESE BARRACUDA)
Forget the flesh – the skin is the best part of the Japanese barracuda. The sleek, shiny skin hides a layer of healthy fats that enhance the clean flavours of this lean, mildly flavoured fish. The skin is often lightly torched before the sushi is served. Best enjoyed in autumn and winter.

09 KAREI (JAPANESE FLOUNDER/FLAT FISH)
Of the many varieties available, marbled flounder is most prized for its fattiness and subtle briny flavour. In Japan, engawa (the sinew along a flounder’s fin) is popular among women as it is rich in collagen.