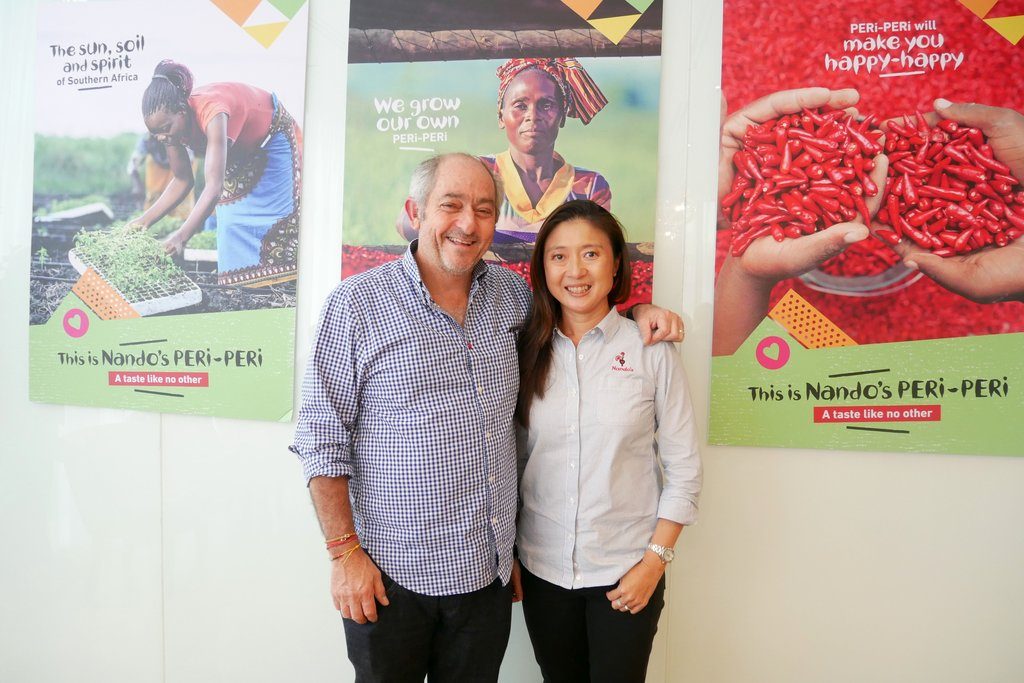 Nando’s Co-Founder Robert Brozin and Mac Chung Lynn – the Group CEO of Nando’s Malaysia and Singapore – Compare Notes on Giving Back to the Community.
Thursday, November 14, 2019 By Ellfian Rahim

When Robert Brozin purchased a “dodgy” local café called Chickenland in Johannesburg, South Africa back in 1987 with his business partner, Fernando Duarte, the co-founder of the now world-famous Nando’s restaurant chain never imagined he would become so personally invested in the whole affair. But after shepherding his brand to global success, Brozin stepped back from the role of CEO in 2010 to concentrate on philanthropy and cultural aspects related to the business.

“In a business like ours, we aim to change lives and leave the world a better place than before,” revealed Brozin during a short stopover in Kuala Lumpur recently as the honoured guest of Mac Chung Lynn, the Group CEO of Nando’s Malaysia and Singapore.

And that big flavour that changed his life is the now famous peri-peri (Swahili for ‘pepper-pepper’) sauce. The African bird’s eye chillies that go into the sauce are among the most pungent varieties of pepper in the world. “What we at Nando’s have done is to help farmers in South Africa’s neighbouring areas to grow these chillies – we help them with funding, and link these farmers with agricultural experts so that they know the most effective way to grow their crop. Then, we also buy their harvest for our own, famous Peri-Peri sauce,” reveals Brozin.

“As a company born and bred in Africa, Nando’s believes strongly in supporting programmes that make a real difference to the people of the continent that we call home,” Brozin continues. Since joining the United Against Malaria campaign in 2009, Nando’s has led a campaign that has raised funds for the Global Fund to Fight AIDS, Tuberculosis and Malaria. It has also partnered with South African explorer Kingsley Holgate to deliver life-saving mosquito nets to vulnerable communities throughout sub-Saharan Africa. “The time to act is now, and it’s incumbent on Africans to be part of eradicating malaria from our magnificent continent.”

Meanwhile, closer to home, Nando’s in Singapore has a partnership with the Singapore Corporation of Rehabilitative Enterprises to create opportunities for former convicts, thereby providing gainful employment for these individuals. “Since starting the program in 2012, over 300 former convicts were able to get fresh starts with Nando’s Singapore after their prison stints,” reveals Mac Chung Lynn. “This kind of employment program allows those who want to turn their lives around the opportunity to do it with dignity and respect. Nando’s as a work environment gives them gainful employment that helps them get their lives rolling after spending time in the penal system.”

Going beyond that, Nando’s in Malaysia has also given young Malaysians an opportunity to delve into their artistic side. Ever since 2007, The Nando’s Art Initiative has been a fixture for young artists looking to showcase their work in a professional setting.

What began as a contest featuring commissioned work from seven local artists has evolved into a nationwide celebration of young talent and Nando’s has even launched a commemorative coffee table book in 2017, entitled A Journey of Colours, which narrates the stories of the grand prize winners of this art project over the past 10 years. “With this initiative, you can see Nando’s commitment to the arts and ensuring that young creatives have the support, and the platform to showcase their talents,” concludes Mac.