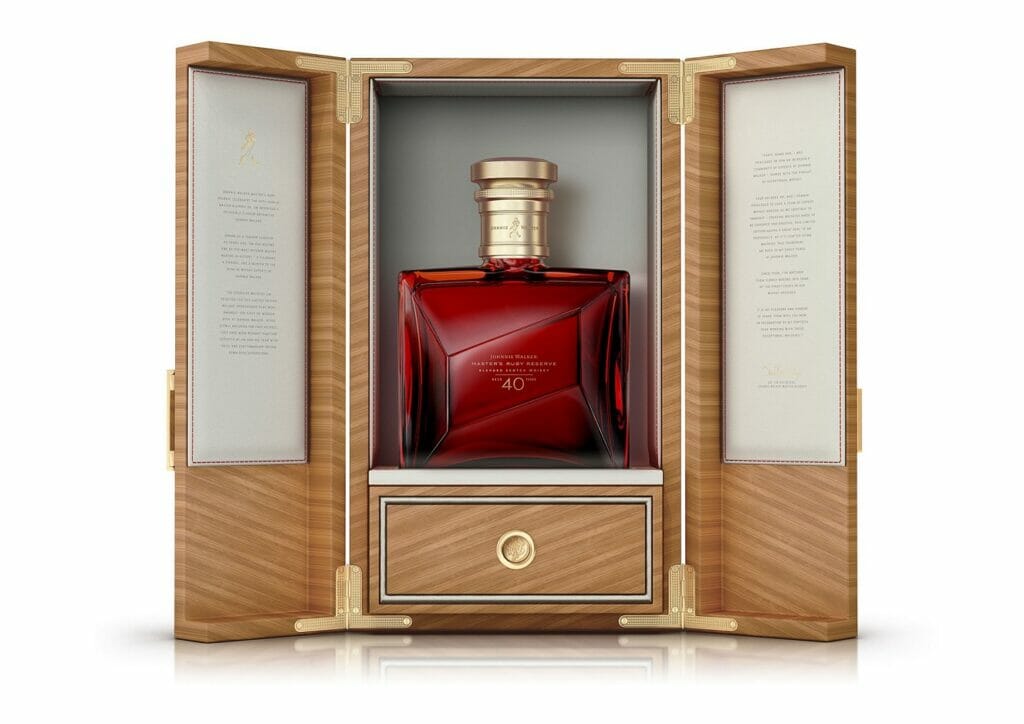 Only 398 bottles of Johnnie Walker Masterâ€™s Ruby Reserve are being released.
Wednesday, April 1, 2020 By Christy Yoong

Johnnie Walker recently released a new Scotch whisky that honours its Master Blender Dr Jim Beveridgeâ€™s 40 years of exceptional craft and dedication to whisky. Johnnie Walker Master’s Ruby Reserve is made from some of the finest Scotch in the Johnnie Walker reserves, with Beveridge personally selecting eight exceptionally rare whiskies that evoke his earliest whisky-making memories to create a unique Scotch that provides a window into his distinguished career.

All the whiskies used to create Johnnie Walker Master’s Ruby Reserve are at least 40 years old and only 398 bottles are being released, making it an extremely limited run of an incredibly rare liquid. Beveridge, who was recently awarded an OBE for his services to Scotch, has dedicated the last four decades to creating extraordinary whiskies that have been enjoyed in more than 180 countries around the world.

For this celebratory limited-edition, he worked closely with his team of whiskymakers and has chosen whiskies from the ‘ghost’ distilleries of Cambus, Carsebridge, Pittyvaich and Port Ellen, all perfectly balanced with highly aged expressions from Talisker, Royal Lochnagar, Glendullan and Cragganmore.

According to Beveridge, every whisky that has gone into the creation of this new expression holds a special place in his heart, having worked at each of these distilleries during various points of his career.

The ‘ghost’ whiskies from Cambus, Carsebridge and Pittyvaich bring layers of rich fruit flavour, which has been combined with the flavours of dark chocolate, plums and cherries found in the aged expressions of Royal Lochnagar, Glendullan and Cragganmore, and the soft aromatic sea salt notes of Talisker and Port Ellen to create a beautiful, full-bodied whisky.

This exceptional whisky is presented in a handcrafted golden-red Baccarat crystal decanter. This emblematic colour â€“ a tribute to Beveridgeâ€™s ruby anniversary and a hallmark of Baccarat’s most exceptional pieces â€“ is the embodiment of unique craftsmanship handed down from generation to generation since the mid-19th century. Clear crystal is gradually fused with 24K gold powder at exactly 540Â°C to achieve the iconic golden red finish.

In addition to marking Beveridge’s ruby anniversary, this year Johnnie Walker will also be celebrating 200 years of pushing boundaries with a number of new releases and the opening of Johnnie Walker Princes Street, a landmark visitor experience in the heart of Edinburgh, Scotland.

Johnnie Walker Master’s Ruby Reserve has an ABV of 43% and is on sale now.