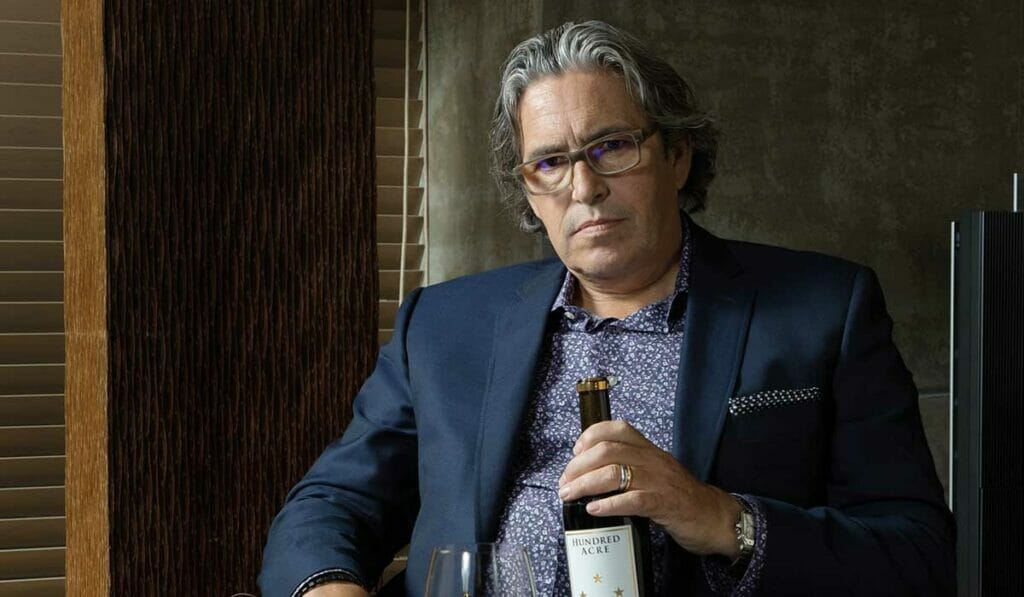 â€œThis is the first media lunch I have ever done. I never meet with the mediaâ€¦my wife and sales director had to trick me into this at the least minute,â€ shares Jayson Woodbridge at a recent meeting with the media. The outspoken, contrarian and wildly successful owner and winemaker of Hundred Acre winery doesnâ€™t need to do this either. With a five-year waiting list, the cult Napa cabernet sauvignons he makes under the Hundred Acre label command consistent four-digit values on the openÂ market.

Printed on the label of every bottle of Hundred Acre wine is the opening paragraph of Homerâ€™s Odyssey. Itâ€™s the story of a manâ€™s â€œsingular questâ€ â€“ and Woodbridge can certainly relate.

In his search for perfection, the 55-year-old investment banker-turned-winemaker carved his path by essentially doing anything he pleased, sometimes against common wisdom or even fiscal sense.

Despite that, Woodbridge has gotten away with it for almost two decades because his process clearly works â€“ HundredÂ Acre wines are regularly described with all manner of positive adjectives and hyperbole like â€œplush, opulent and elegantâ€ â€“Â and they deserve them. Since its first vintage in 2000, the winery has been awarded 19 100-pointers in Robert Parker Wine Advocate.

To get to that point in quality for his wines, Woodbridge also affords Hundred Acre wines every possible attention to detail, sparing no expense at every step of vinification â€“ from caring for his vines to crafting each glass bottle.

In stark contrast to the current non-interventionist winemaking zeitgeist, Woodbridgeâ€™s philosophy boils down to doing whatever is necessary to make the best possible wine for each vintage. To that end, technology plays a big part. Hundred Acreâ€™s vineyards are installed with micro-misters that create superfine droplets of water that instantly evaporate, effectively air conditioning the land without watering the grapes. There are also NASA-grade air filters in the wineries to keep them sterile.

Clearly, the land the vineyards sit on has to be exceptional, too.Â â€œIâ€™ve looked at thousands of vineyards, and have chosen only four in the whole world to make Hundred Acre,â€ shares Woodbridge.

Take his Hundred Acre ArkÂ Vineyard, for example. This geological marvel lies at the foot of Howell Mountain in NapaÂ Valley. Tectonic movements flipped the land on its side, exposing nine different soil types that have formed over millennia â€“ like a layered cake (coincidentally or not, Woodbridge also makes a series of more accessible wines named Layer Cake). Here, two different rootstocks are grown on each stratum.

Then thereâ€™s Woodbridgeâ€™s incredibly fastidious picking process. When itâ€™s harvest time, workers pick only the berries that are suitably ripe â€“ leaving the rest for future passes through the vineyard. Pickers are paid by the hour â€“ instead of by the weight of their harvest, as is the norm in Napa â€“ so that theyâ€™re incentivised to pay attention to what they pick. When the fruits go into the crusher, they â€œlook like caviarâ€.

If that wasnâ€™t enough, Woodbridgeâ€™s vinification process takes it a step further. If a particular harvest takes six rounds of picking, thatâ€™s â€“ after multiplying it by the soil types and varieties of rootstock â€“ 108 possible expressions of wine from a single vineyard.

One could just combine all of that into a single batch, but Woodbridge ferments each expression separately before doing the blending with what sounds like an almost supernatural precision. â€œI taste every single barrel and I combine them in my head. I donâ€™t lay out a hundred glasses and move between them. Thereâ€™s no trial and error.â€

To protect the precious liquid in each bottle of HundredÂ Acre, unusually long and dense corks are used, in addition to a final sealing of beeswax that protects the wine and cork against microorganisms.

The cherry on top of it all is a band of 24K gold â€“ since weâ€™ve already come this far â€“ that is fired directly into the glass bottle with a process that took Woodbridgeâ€™s glassmaker years to figure out how to do. Woodbridge declares the gold band his bond to his customers, explaining: â€œHundred Acre isnâ€™t cheap. If people are paying those prices, they need to be getting greatness in every bottle.â€

With all that effort involved in making his single-varietal, single-vineyard cabernet, Woodbridge likens it to â€œclimbing K2 without oxygen, in wintertimeâ€; but he still does it. â€œBecause [he] canâ€.