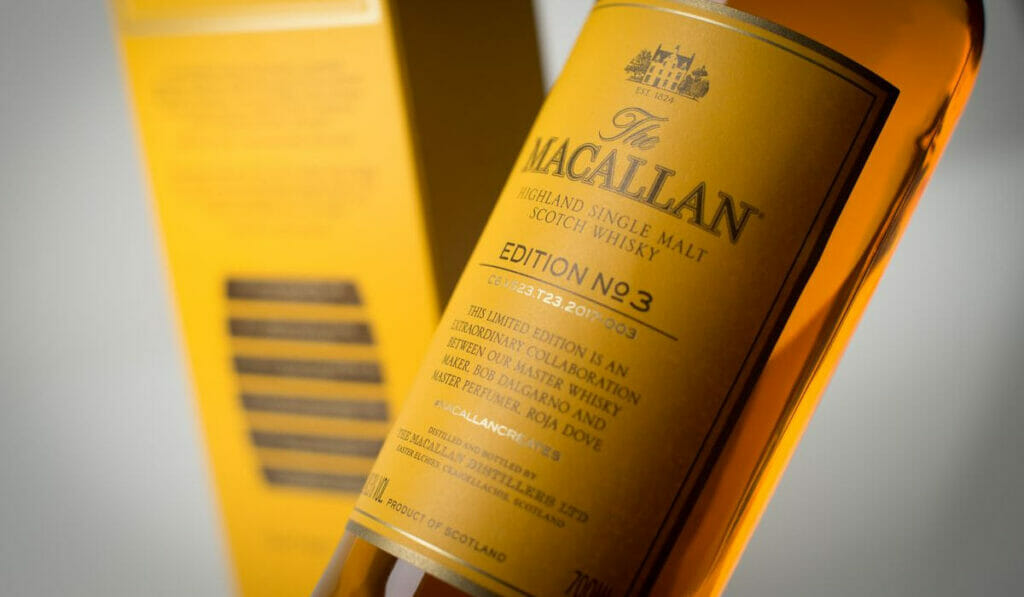 Master perfumer Roja Dove collaborates with The Macallan to launch the Edition No. 3
Tuesday, December 26, 2017 By Editors

Much of what we perceive as flavour comes from the sense of smell. It is the reason why everything seems to taste bland and insipid when we run a cold or when our noses are blocked.

â€œThe sense of smell is the most primitive sense,â€ says master perfumer Roja Dove, who worked at Guerlain for 20 years before starting his own business and collection of fragrances now known as Roja Parfums. â€œSmelling allows us to find food, or to find a mate.â€

Smelling â€” that is the ability to put together or pick out aromas â€” is also the penultimate sense in the world of wine and spirits. It becomes obvious that Doveâ€™s world is not too different from the world of crafting drinks, and which also serves as the inspiration for The Macallanâ€™s latest release, the Edition No. 3.

One might be surprised to learn, however, that the 61-year-old master perfumer was anything but a whisky drinker. â€œI remember when I was first approached by The Macallan to explore the possibility of a collaboration, I said to them: â€˜Sure, but only if you first understand that I hate whisky.â€™â€ Undaunted, The Macallan invited Dove up to the distillery in Speyside for a meeting with master whisky maker Bob Dalgarno.

â€œEveryone was nervous about our first meeting, because we came from different worlds and backgrounds,â€ Dove recalls. At their initial encounter, Dalgarno pulled out some 20 whiskies for Dove to nose, and at the end of the meeting, the duo found commonality between themselves. For Dove especially, it was a life-changing experience: â€œI discovered citrus notes and roses in the whiskies. It opened my eyes to what whisky was about.â€

In many ways, the training and work of a master perfumer mirrors that of a whisky distiller and maker. â€œThe training for a surgeon generally takes eight years, but for the perfumer, it takes 15,â€ Dove quips with a smile, adding that the perfumer must commit thousands of scents to memory in order to blend. â€œThe art of blending boils down to balance,â€ he explains. â€œCitrus aromas are very volatile and donâ€™t last as long as animalic notes. So in creating a scent, you have to first imagine what you want it to smell like, then spend anywhere from six months to two years to turn it into a reality.â€

Much in the same fashion, the whisky distiller has in his mind thousands of whisky barrels and flavour profiles. From these, he is able to pick and choose the ones that would come together to create a blend that is greater than the sum of its parts. But the ability to do that presupposes a thorough knowledge and the ability to identify each and every barrel of whisky and its flavour profile in the distilleryâ€™s collection.

Recounting his experience working with Dalgarno, Dove has nothing but admiration and respect for the master distiller. â€œBob knows the smells and flavours of 250,000 barrels of whiskies under him,â€ he shares. â€œHe is able to go through the whole warehouse and pull out the exact flavours I was looking for, and he could blend them in the exact way I imagined the whisky to turn out. That is just genius.â€

Architects of Aromas and Flavours

When asked what he enjoyed most about whisky now, Dove says it is the complexity and breadth of flavour that he finds most compelling. Helped along by his ability to nose and identify thousands of scents, he could then help a distiller like Dalgarno assemble a dram through the eyes of one who creates fragrances.

The Macallanâ€™s No. 3 is a culmination of this collaborative effort. Unlike the previous editions whose emphasis was on cask types and influences, this current limited edition release provides an unprecedented insight into distinctive aromas and flavours. Building on a heavier base derived from Tevasa casks, Dalgarno and Dove built into it fresh cut oak and citrus characters from Hudosa casks; vanilla ice cream and crisp green apple from bourbon casks; and finally dry floral notes from European and American seasoned casks. The resulting whisky presents a sweet and fruity profile marked by delicate florals, vanilla, and rich fruit cake characters.

â€œIn working with the Macallan, I want to show off what they can do,â€ says Dove. â€œI donâ€™t know how challenging this has been for Bob because Iâ€™ve never asked him. But I hope you can feel from me how surprised I was by the breadth of flavour The Macallan has to offer, and I want this to show off what they are capable of.â€

â€œDo you regard this more of an art or a science?â€ I ask Dove. â€œThis is 100 per cent an art,â€ he replies without skipping a beat. â€œIt is true that sometimes fragrances and whiskies are made from a scientific perspective, but my work starts with a creative idea in my mind. Iâ€™m made an ambassador for Great Britain for my creative work, not my scientific work. And I feel the same is true for Bobâ€™s work â€” weâ€™ve known each other for a decade now, and from how I understand his work, The Macallan is, at the end of the day, the result of a creative know-how.â€