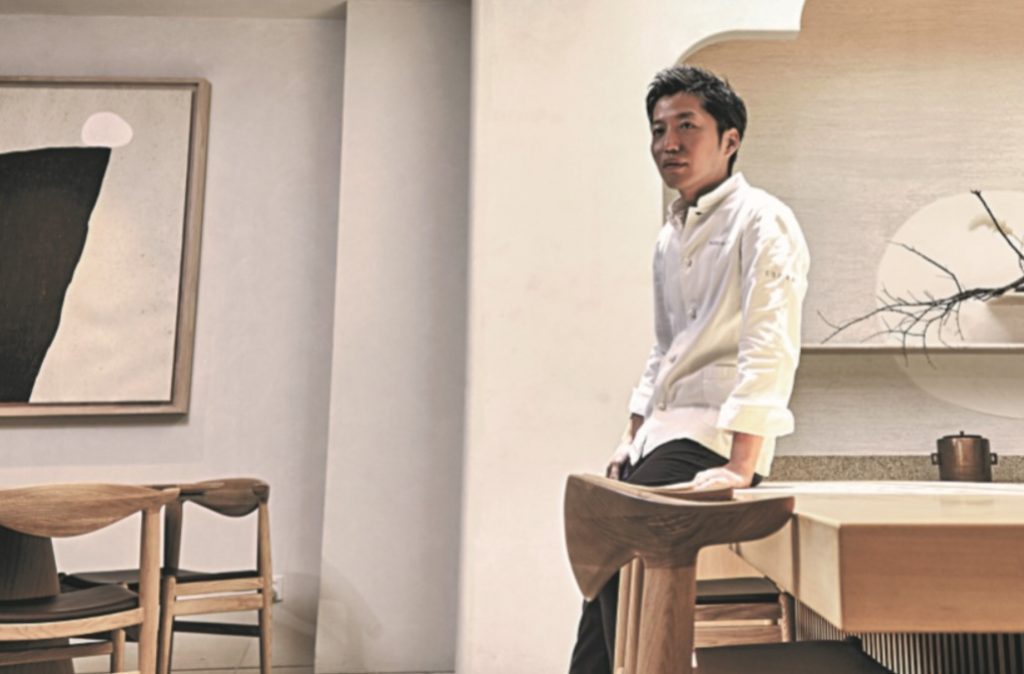 It is easy to be blown away by the beauty of Shigeru Koizumi’s food. The cuisine at his modern kappo restaurant Esora – The Lo and Behold group’s ﬁrst foray into Japanese ﬁne dining, opened last year – expresses not so much the abstruse Japanese philosophy of wabi-sabi . In fact, there seems to be a very concerted effort in delivering precise exquisiteness on every plate, and with a certain level of lavishness. Think an assiette of sashimi and sushi pieces presented amid fresh sprigs of tremblingly delicate sakura blooms, artfully placed on a bed of glutinous rice grains stained different shades of pink to resemble the scatter of fallen petals on the ground. Or an arrangement of petits pois and micro-blooms atop a mound of vibrantly green shells, looking as picture fresh as spring.

But there is much more to his cuisine than deliberately evocative plating. Behind each dish is a chef’s pursuit of perfection. This would be a common rhetoric, except in the case of-34 year-old Koizumi; he is trying to attain perfection through adopting modernist techniques. So, while his dishes carry with them a purity and reverence for nature, quintessential of Japanese cuisine, they are not quite your usual “Japanese food”. Some of the items – like a globule of tomato water enrobed in a gelatine skin; or a candy shell formed in the likeness of an apple, ﬁlled with Japanese apple vinegar, fresh apple and apple sorbet, yogurt and citrus espuma – wouldn’t be out of place in a contemporary European restaurant, even.

“The ﬁrst time I used modern techniques was at Ryugin, when I made a powdered ice cream from liquid nitrogen,” recalls Koizumi of his ﬁve years cooking at the three Michelin-starred Tokyo restaurant, under the wings of Seiji Yamamoto. It was a moment of epiphany. “I always thought Japanese cuisine was boring. In Japan, restaurants all tend to do the same classic dishes during certain seasons, and I like those traditional dishes too. But, if I do something new, or use a ‘non-Japanese’ ingredient like butter, then people will feel that my food is not authentic. It is not like French cuisine, which allows for a lot of personal expression,” says the Odette alumnus. “Through modernist techniques, I feel that I can make dishes that are intrinsically Japanese, but new.”

So liquid-nitrogen freezing, sousvide cooking, whipping siphons for making espuma, and spheriﬁcation are all techniques he employs. And his well-heeled clientele is loving the revelation that Esora presents – that ﬁne Japanese food exists outside of sushi restaurants which seem to have dominated the Japanese ﬁne-dining landscape in the last few years; and that the age-old culinary culture can take on a different, modernist expression.

Yet the cool gadgets and new-fangled cooking methods are only a means to an end. Yes, the medallion of omi beef might have been cooked at exactly 62°C deg C, and the infused libations from the tea pairing menus brewed at 60° and steeped for exactly 30 minutes. But nobody is going to take a sip of the tea, or a morsel of food and go: “Ah. What excellent temperature control.”

The draw of Koizumi’s cuisine – in the words of The Lo & Behold Group managing partner Wee Teng Wen, who ﬁrst noticed Koizumi while he was a chef at restaurant Hachi in Singapore – lies in his ability to express ﬂavours with stunning clarity and elegance. “His Japanese food is quite unlike anything that I’ve tasted in a while, and yet something that I would ﬁnd myself returning to over and over again.”

And, at the risk of contradicting himself, the soft-spoken chef says: “Actually, the technique is not important.” He takes the pre-dessert of apple candy as an example. “I use a lot of modern techniques to make it, but the dish is not a showcase of the techniques. I wanted to just express a memory from my childhood, of how I felt when I walked through the woods on my way back home from school, seeing an apple on the ground.”

These personal memories of nature – an intrinsic part of his formative years – are what gives a distinct quality to Koizumi’s food. “I grew up in the countryside of Nasu (in the Tochigi prefecture, outside of Tokyo). It has everything, mountains, rivers… well, just not the ocean, but everything,” says Koizumi, describing his hometown with distinct fondness.

“When I go home from school, I will pick vegetables from the side of the road – my father taught me from young what are the wild vegetables that you can eat and are tasty – and my mother would make vegetable tempura, which I love. Or I might catch ﬁsh in the streams, pick chestnuts or fruits. The walk home from school was 40 minutes long – maybe an hour, if you stop to catch ﬁsh – but as a seven- or eight-yearold, it was a very nice time for me.”

The son of a stone mason father and vegetable grower mother also recounts meals at the family table, where conversation would inevitably turn to food. “We always ate together – my parents and two brothers. My mother and paternal grandmother grew vegetables, so they always cooked simple vegetable dishes. Once a week, I would eat at my paternal grandmother’s home. She worked in a ryokan as a chef so her cooking was more elaborate, but still the focus was on seasonal vegetables, that which grows around us.”

Nature and its bounties are so much a part of Koizumi’s life that, when he went to work in the restaurants of Tokyo as a youth, instead of being dazzled by the bright lights and cityscape, he found himself pining for the mountains. “I would go back to my hometown once a month, to see the mountain and the skies.”

Needless to say, Esora – which means “painting the skies” in Japanese – is Koizumi’s tribute to nature, set amid the hustle and bustle of Mohamed Sultan Road. And, while the word in the Japanese language often carries with it a sense of the impractical and fantastical, Esora is a very real undertaking for Koizumi.

With its modern zen interiors and deliberately free-form botanical arrangements that change with the seasons, it can indeed seem like a beautiful bubble of rural idyll. But there is backbone to this fantasy, and a lot of hard work put in by Koizumi.

Esora might have swept up numerous industry awards, less than a year since its opening, but it is early days yet, and staying aﬂoat in the ﬁckle, cut-throat F&B landscape is going to take a lot more.

For now, he downs his fourth coffee at midday, and unfurrows his brows as he turns to smile for the camera