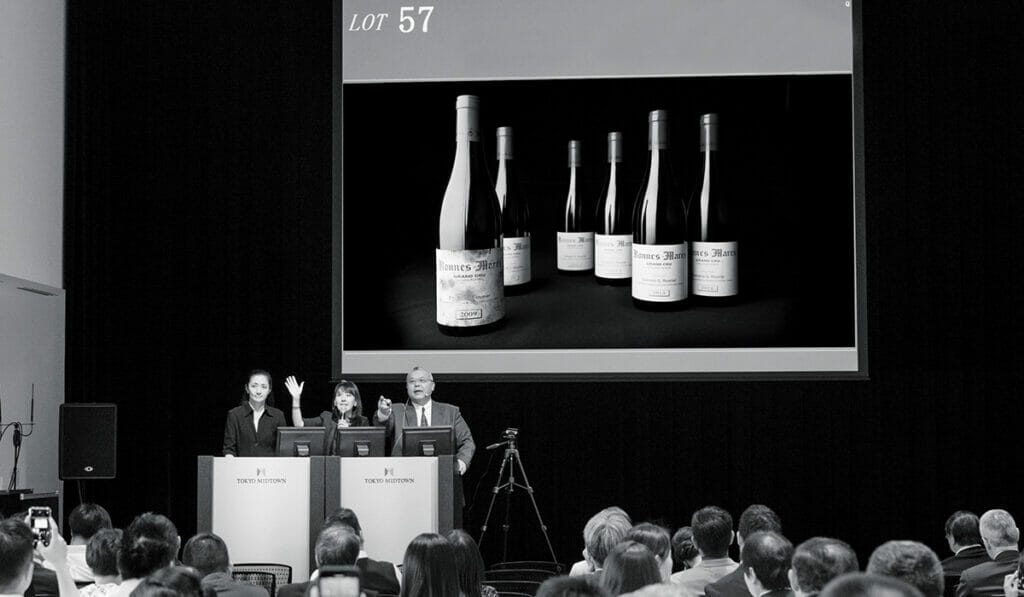 Educate yourself about how wine auctions work before they are snapped up.
Tuesday, November 5, 2019 By Editors

Imagine snagging a case of the legendary 1961 Hermitage La Chapelle – valued at about 10,000 pounds (MYR53,765) per bottle today – for just over a thousand pounds. That was exactly what Tan Ying Hsien witnessed at a Christie’s wine auction, where the lot was listed with an estimate in the low hundreds.

Before you start packing your suitcase for the next Christie’s or Sotheby’s wine auction, know that this happened in the 1980s. Yet, even then, the sought-after vintage from Rhone (which Tan describes as “the equivalent of gold dust in the wine world in those days”) was selling at double the realised price in the market. Attended mostly by industry professionals, and with lots geared towards the trade, wine auctions during those times often produced prices that were substantially lower than retail. And as a law student with a limited budget but an insatiable appetite for wine, Tan found auctions one of the most cost-effective ways of amassing a collection.

“Given the context of the auctions in those days, when fewer collectors and investors attended, prices were not as rarefied as they are today,” recalls Tan. Among the “memorable and affordable purchases” he made: a mixed lot of wines from 1955, including single bottles each of Krug, Chateau Latour and Graham’s vintage port. “The 1955 Krug stills stands as the single greatest bottle of wine I’ve consumed,” reminisces Tan.

Yet for all the fond memories that he has, the wine journalist, speaker and the first Singaporean to be a Master of Wine, has not attended an auction in years. “The wine auction market is a very different animal today. It is a lot more accessible with online bidding. Combined with the global expansion of interest in wine with wealthy collectors viewing it as investment and the pursuit of certain wines or wine producers as trophies, there is less opportunity to buy wines at advantageous prices relative to the rest of the market,” analyses Tan. “At the same time, there are now more wines available to collectors through wine brokers who are competitive with the traditional auction houses in price and provenance of the wines. From a personal perspective, there is therefore less incentive for me to purchase through auction as opposed to merchants or brokers.”

Is the golden age of acquiring wines through auctions over? Not quite, in the opinion of others. Wine collector Jackson Yeh attended his first auction, the Kaigai Wine and Whisky Auction in Tokyo last May, and is just getting in on the auction action.

Yeh had his sights trained on something else when he took part in the auction, but spotted a lot with a rare 1964 vintage 41-year old Karuizawa whisky and ended up winning it. Since then, Yeh has attended one live auction and participated in various online auctions, and has picked up prized drops such as pre-2005 Denis Mortet wines, old bottlings of Levi Romano grappa and Hibiki 30 whisky. “It would be extremely difficult to find rare bottles – older vintages or those from cult producers – outside auctions,” shares Yeh.

International wine consultant and oenologist Edwin Soon echoes Yeh’s opinion, saying that auctions remain a good fast-track method to build a mature wine collection – especially if one seeks breadth and depth. “Few merchants carry a wide enough range of wines and brands, as it means tying up their funds in holding old vintages. There are exceptions of course, as some merchants are also collectors themselves, but rare wines – cult collectible wines from the world’s best wine regions, especially old vintages – can almost only be found via auction these days. Furthermore, you can come across deceased estates sometimes and there could be bargains.”

Kevin Cheng, representing one of Japan’s oldest wine auction and distribution companies Kaigai Shuhan, shares that some lots might go with just a single bidder.

“But we have seen lots of rare collections and bottles that have 10, 15 or even more active bidders. We had a vertical collection of Chateau Mouton Rothschild which was sold at our auction a couple of years ago for three times the initial estimate, with a total of 35 bids.

“Some bidders just wait around to see if some under-the-radar bottles will be overlooked by people, especially later on in the auction, and try to snap those up cheaply. At times, they can be extremely lucky and pay 30 to 40 percent below the retail price for these wines.”

The move to online-only auctions

Online wine auctions are also changing the rules of engagement. And even the big boys have jumped on the bandwagon. Christie’s Wine Online platform has been in existence for quite a number of years, and Sotheby’s – which ranks number one in live auction sales worldwide – is also developing the online platform beyond online bidding in real time. Bilbey shares: “It is clear that the online platform presents huge potential as demonstrated by the continued growth in the number of online bidders and sales value, and we are certainly committed to drive more online initiatives going forward. Compared with live auctions, online-only auctions offer a much longer window for bidding (usually 10 to 14 days), which allows buyers to bid at ease outside of our regular sale seasons.” Bilbey also revealed that Sotheby’s extended their online-only auction model to spirits earlier this year with very promising results. They will be holding another online-only sale, The Ultimate Whisky Collection, this November.

At Sotheby’s, every bottle of wine undergoes vigorous inspection by specialists before it is put up for auction. “For our largest-ever single-owner sale, Tran-scend-ent Wines, which took place earlier in March, we had to pull in a global team to inspect over 16,000 bottles over a period of two months,” reveals Bilbey.

Cheng also shares the rigorous screening process Kaigai’s consignors go through: “Many of our long-time consignors have purchased wines directly from the wineries themselves or through primary dealers, so the sourcing is impeccable. We often ask for consignors to show proof of purchase through invoices, correspondence with the seller or other documentation that can prove the provenance of the wine.

“Secondly, all wines have to be stored in an accredited professional wine storage facility. For private collectors with their own storage facilities, we often inspect these cellars for temperature and humidity conditions. Finally, every single bottle is inspected at least once by our team. Wines with ‘off ’ colours that are uncharacteristic of the wine or spirit; issues with the cork, label or capsule may also result in a bottle being rejected or flagged for review. And of course, we will go through a rigorous process to identify any potentially suspect bottles if there are any.”

Such stringent screening is another reason why collectors favour auctions, despite the relatively higher prices and the more intense competition. Even Tan concedes that the auction market still provides an opportunity to buy wines “that are either rare, or which are of specific interest to collectors (eg anniversary years) which would otherwise be difficult to find on the retail market.”

And for some collectors, there is enjoyment in the thrill of the bidding process too. If all that anticipation doesn’t appeal to you, Yeh suggests narrowing down the lots you are most interested in. “If there is a lot that you feel is a must-have, just set your bid to the maximum price you are willing to pay.” After all, at an auction, you decide what is the right price for that bottle of wine.

The real deal – or not? The Peak’s wine expert shares tips on guarding oneself against fake wines

The high profile 2012 arrest of Rudy Kuniarwan – the notorious wine fraudster who cashed in on the rise of global wine auctions to reap hundreds of millions through kitchen-counter blends of “Grand Cru” bottles – has certainly tainted many collectors’ impressions of the process. It has been speculated that some US$550 million (MYR2.3 billion) worth of Kuniarwan’s fake wines are still out on the market.

“If you are participating in online auctions, deal only with auctioneers that are well known,” advises Soon. Yet fraudulent wines float around even outside of auctions, and all collectors interviewed by The Peak stress the importance of doing due diligence before making a big purchase. Here are some tips from Soon:

“A baseline guide to old wines is to use ullage levels. If a very old wine has a higher than expected ullage, it could have been topped up (certificate required), or if not, it is likely a fake,” says Soon. “If the ullage is much lower than expected, the wine could have been stored incorrectly, in which case more wine has evaporated over the years, so beware.”

Soon also advises collectors to examine wine bottles and the labels. “If the label is stained with wine, or worse, the cork is protruding and is wet all over, the wine would have been mishandled and has probably gone through a hot room temperature.”

“Have your collection appraised every few years. There are fakes everywhere. This is why some wine companies offer recorking services for mature wine, where they will check and certify the wine. Most important, follow your taste. After all, you are collecting to enjoy the wine – so, don’t buy wine you would not drink.”