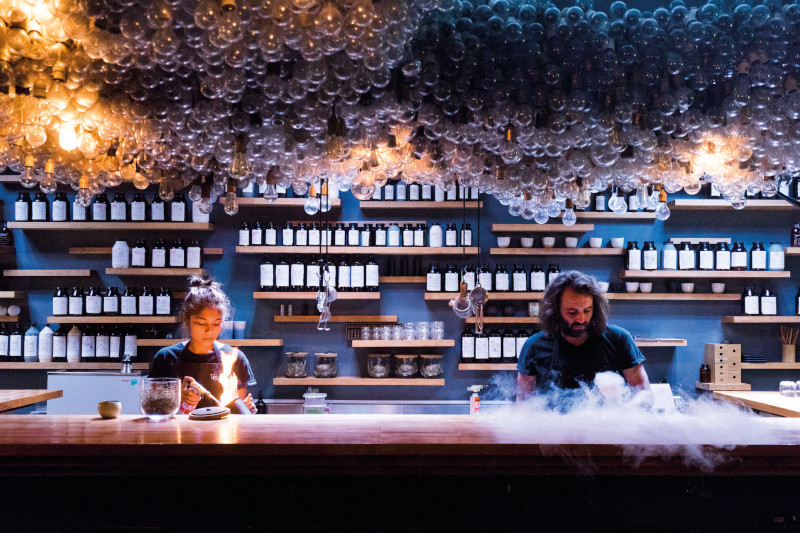 Cocktails have come a long way from being merely shaken and stirred
Monday, June 17, 2019 By Editors

While it might seem like cocktail bars are increasingly adopting the dapper, classy aesthetic of yesteryearâ€™s lounges â€“ away from the world of sugary vodka drinks and flair bartending of the noughties â€“ a very different story is going on behind the scenes. Step into the back of any craft cocktail bar today, and the mise en place resembles a chemistry laboratory more than a kitchen. Machines, all dials and buttons and glass apparatus, have replaced pots and pans. Just like the high-tech predilections of modernist cuisine, cocktails too, have entered a whole new world of possibilities. Itâ€™s not just spheres and hydrocolloids though â€“ flavour is king in this movement. New technology allows classic techniques to be taken to greater heights. Head bartender Andrew Loudon of hyperprogressive cocktail bar Tippling Club in Singapore boasts his fair share of gadgets, but the goal at the end of the day is still a delicious liquid, as opposed to textural or visual gimmicks. At the bar, Loudon uses a Sonic Prep â€“ a device that emits ultrasonic waves â€“ to craft a â€œsonic negroniâ€, where the drink is hit with sound waves to mimic the effect of weeks-long barrel ageing in a matter of minutes.

Like a hidden mad scientistâ€™s lab, the speakeasy-style Operation Dagger has its rotary evaporator running on full throttle to produce cocktail components like sesame, walnut and even hay distillates â€“ each a colourless liquid with a purer expression of flavour that would never be possible with traditional infusions. Sous bartender Sasha Wijidessa shares: â€œNow, it seems like most bars have one in their inventory. But I think this is mainly because the drinking culture has been evolving and there are more bars now that are more focused on flavour, which would explain the rise in bars investing in equipment to help facilitate that.â€

The latest craft bar to hit the scene is the Ernest Hemingway-inspired The Old Man, where high-tech equipment is used to ensure the consistency of the fast turnover of drinks. â€œOne of the main advantages of using these machines is the accuracy they provideâ€¦ We can trust the science and let it work in our favour, removing a huge deal of uncertainty stemming from fluctuations in natural product quality,â€ explains founder and managing partner Andrew Yap. To this end, they clarify grapefruit juice by treating it with enzymes and fining agents, and running it through their enormous centrifuge to separate the sediment. The result is crystal-clear juice, which they combine with sugar and salted gin before carbonating the mixture for a crisp, refreshing cocktail with a fine carbonation