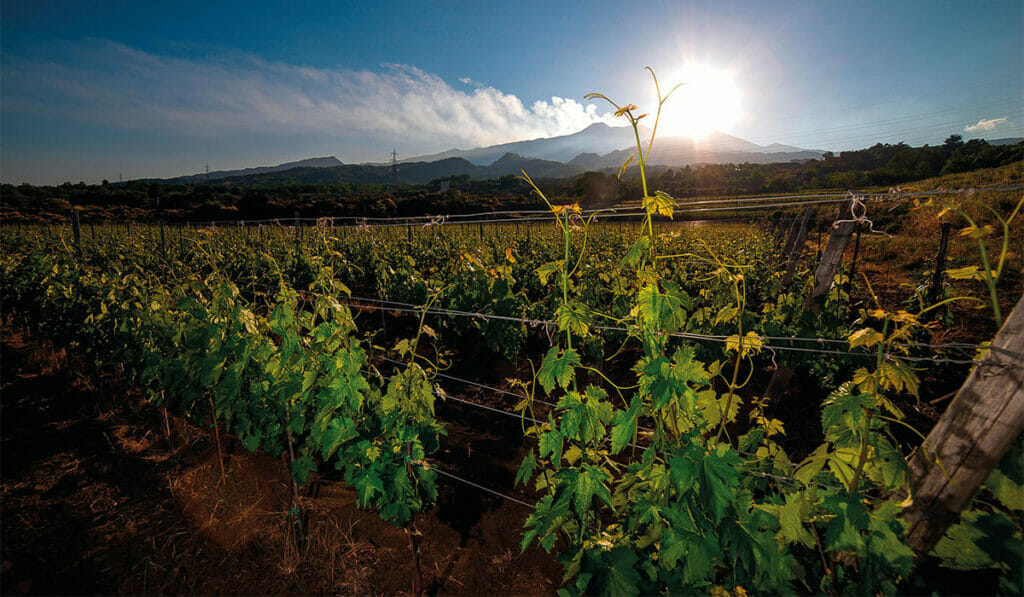 New ambitious winemakers in Sicily are raising the quality and awareness of wines produced on the southern Italian Island.
Wednesday, March 27, 2019 By Editors

The volcano looms ahead of us, snow covering its upper flanks, a plume of white smoke trailing from its peak. Below are ebony slopes blanketed in forest, and, lower still, the terraces start â€“ wide, dark steps cut into the hillside. Against the charcoal hues of the volcanic soils, the vines seem especially green.

It is lava from the 3,350m-high Mount Etna, the famous, still-active, volcano on the Italian island of Sicily, that has, for tens of thousands of years, provided the mineral-rich soils here. But it is only in recent years that this fertile ground has become the home of some truly exciting winemaking.

A new crop of winemakers across Sicily, but especially on Etna, is focusing on the unique varieties of grape indigenous to the island. These winemakers are bucking global winemaking trends to chart their own path, cultivating the vines and making the wine in a way that best expresses the individual characteristics of the grape and its terroir.

While Sicily has been known for its Marsala, the sweet, fortified wine produced in the islandâ€™s wild west, as well as for its low-cost, high-quantity wines â€“ it regularly produces as much wine as Australia, Chile and Bulgaria put together â€“ its fine wines from this new approach are now turning heads and captivating palates.

â€œThe reputation and quality of Etna wines are growing at a pace,â€ says Antonio Benanti, from his impressive visitor centre on the south-eastern slopes of the volcano. â€œFor decades, the wines of Sicily were bulk, cheap wines used in blends. The island lacked people with vision to aim higher. But the terroir, the alpine elevation and drainage, the indigenous grape varieties â€“ thereâ€™s so much potential here.â€

01 VOLCANO ADVANTAGES
Mount Etna is responsible for the fertile volcanic soil that blankets the regionâ€™s vineyards.

02 WINEMAKING IN THE FAMILY
The Benantis (from left): Salvino, Antonio and Giuseppe.

03 AGEING METHODS
Benanti wines are aged in a mix of French barrels and stainless steel tanks.

10 EKED FROM THE GROUND
Cerasuola di Vittoria is a product of sandy soils.

FIRE OF THE NORTH

Antonio and his twin brother, Salvino, after business school and London banking jobs, returned to Sicily in 2012 to take over their fatherâ€™s vineyards. They embarked on a fierce consolidation campaign: They sold off vineyards in other parts of the island, as well as less ideal Etna plots, and pulled up vines of all but indigenous varieties.

â€œMy father started from scratch in the 1980s. There was plenty of local skill with grapes and vines but he had no prior knowledge of fine winemaking,â€ says Antonio. â€œThe concept of reducing yields (to improve the quality of the grapes) was not known. Old growers would cry, when they saw us pruning and thinning, throwing away grapes.â€

The Benantis now focus solely on the ancient native carricante â€“ of which they make a particularly lovely single vintage Metodo Classico sparkling wine â€“ and the red grapes, the showstopper nerello mascalese and nerello cappuccio. From these indigenous grapes, they make seven single variety and two blended wines.

Inside some of these wines, including the Benantisâ€™ Serra della Contessa and Rovitello labels, is one of Etnaâ€™s most precious gifts: vines that survived the scourge of the phylloxera pest, which destroyed most of the vineyards in Europe in the 1800s. Few pockets of pre-phylloxera vines still exist in Europe but the sandy, lava- covered soil on Etna ensured that the old vines triumphed.

Benanti is not the only winery carefully tending to these plants â€“ which can sometimes be up to 150-year-old â€“ and making outstanding wines from their grapes.

Tenuta delle Terre Nere, on Etnaâ€™s northern slopes, released the first vintage of its exceptional Prephylloxera â€“ La Vigna di Don Peppino in 2006. The wine is made from 98 per cent nerello mascalese and 2 per cent nerello cappuccio grown on a 1ha vineyard in the township of Randazzo. The wine is beautifully balanced, with black cherry, graphite and spice, rounded off by soft figs and a hint of floral flavours. This pre-phylloxera gem is one of 11 wines in the Terre Nere portfolio.

Terre Nere was started in 2002 by Marco de Grazia, one of the so- called â€œBarolo boysâ€ who shook up traditional Italian winemaking in the 1980s. In the early 2000s, he saw big potential in the soils of Etna and began buying land from farmers.

â€œMarco brought a single vineyard winemaking approach, a cru philosophy, with him,â€ says Marco Ciancio of Tenuta delle Terre Nere. â€œThe soil, the altitude â€“ these change with each contrada (subzone) and we aim to show this in our wines. We leave the vineyards as natural as possible, and we use indigenous yeasts; we grow and harvest the grapes from different contradas differently, the vinification is different, too, with separate ageing, sometimes in oak, sometimes in steel â€“ the aim is to retain the uniqueness of each wine.â€

Winemaking on Etna is no doubt complex. Due to lava flows, soil can change from sandy to rocky within metres and be varied in its mineral composition and pH balance. The volcano also has a big impact on the weather and rainfall: The north facing the sea is cooler and wetter, for example, although the nearby mountains provide some shelter. The steep terraces also mean all work on the vines must be done by hand, including harvesting, and as many vineyards are within Etna Park, production is largely organic. Antonio Benanti calls Etna â€œpossibly the most complicated wine-growing region in the worldâ€.

OLD WAYS IN A NEW CENTURY

But it is not only Etna that has terroir to keep winemakers on their toes. In Sicilyâ€™s south-western region of Vittoria, COS winery makes Cerasuola di Vittoria, the only wine in Sicily with DOCG status, the highest designation of quality among Italian wines. (While the name Etna on a label carries great prestige, it remains a DOC; Antonio Benanti, who is president of the Etna DOC, is hoping to soon elevate wines from the volcanic slopes to the higher appellation.)

COSâ€™ Cerasuola di Vittoria is a blend of 60 per cent frappato and 40 per cent Nero dâ€™Avola, one of Sicilyâ€™s most revered native grapes, grown in the Cerasuola contrada on the western side of the 1,000m Hyblaean Mountains at an altitude of around 250m. Soil here is, in parts, covered in 40cm of sand blown in from the Sahara desert.

â€œWind from the southwest is a nightmare,â€ says Biagio Distefano of COS. â€œMost of our vineyards are in sand but we have a small per cent of clay. The poor soil means we produce some of Sicilyâ€™s lightest styles of wine.â€

COS makes two varieties of Cerasuola aged in Slavonian barrels and in the bottle, and they also make the Pithos Vittoria Rosso, a blend of the same grapes but matured in underground antique terracotta amphorae. Grape must with skins is put into the clay vessels to naturally ferment with minimal intervention for six or seven months. It then goes into concrete tanks before bottling. The time in the amphorae, which are slightly porous, aids complexity, adding a softer, rounder and smoother feel and more baked and plummy flavours to this classic Sicilian blend.

Planeta, one of Sicilyâ€™s biggest producers with five wineries across the island, also makes a delightfully fruity Cerasuola di Vittoria, but, in a reverse of COS, with 60 per cent Nero dâ€™Avola and 40 per cent frappato.

Its Noto winery, resting on the gently undulating white limestone hills of south-eastern Sicily, is known for its Nero dâ€™Avola in the Santa Cecilia DOC, but also for its muscat used to produce its beautifully light and summery dry white wine and its sweet Moscato di Noto and Passito di Noto DOCs.

While most winemakers around the world use Saccharomyces cerevisiae yeast to ferment wine, Planeta uses a yeast called NDA21 in the production of its Nero dâ€™Avola wines. â€œThe university of Palermo came to the south-east area of Sicily and took an ancient yeast from the traditional winemaking buildings that local farmers have been using since 1903. Itâ€™s the NDA21, or Nero dâ€™Avola yeast,â€ says Viviana Pitino of Planeta.

â€œItâ€™s just one example of how Sicilian people are becoming more aware of their own traditions of food and wine. For us it is normal, but now we are realising how special it all is.â€

Ask leading winemakers in Sicily and most will agree that their wines are underpriced. Sicilyâ€™s fine wines are indeed very affordable, but for how much longer?

â€œThey are very good value for their quality,â€ says wine educator Ally Simmons. â€œSicilian winemakers have realised there is a big market for their wines, particularly in the US, and have priced their wines accordingly, but they are nowhere near Barbaresco prices yet. There could be investment opportunities here.â€

Simmons points especially to the pre-phylloxera wines of Etna.

â€œThere will be a huge market for these wines; there are only a few pockets of pre-phylloxera vines in the world so this is a major selling point,â€ she says. â€œBenanti and other producers have the opportunity to really shape the market with something unique.â€

Researchers think there are more than 50 native grape varieties in Sicily. Here are some of the key ones to know and taste.

CARRICANTE
Benantiâ€™s Pietramarina is made from 100% carricante grown at 860m on Etnaâ€™s eastern slopes, about 5km from the ocean. It is put through a unique vinification process that involves gentle pressure in a horizontal press, maturation in stainless steel tanks for three years, and at least 18 months in the bottle.

The result: a graceful, complex white that balances minerality, salinity and acidity with a touch of softness.

Tenuta delle Terre Nere also does a 100 per cent carricante. Its elegant Santo Spirito has a high acidity that suggests good potential for ageing.

FRAPPATO DI VITTORIA
Although frappato is usually used in a blend with Nero dâ€™Avola to make Cerasuola di Vittoria, Planeta makes a delicious 100 per cent varietal. Its Frappato undergoes seven or eight days of skin contact and maturation only in steel tanks.

GRECANICO
COS makes Pithos Bianco of 100 per cent grecanico fermented underground in terracotta amphorae. It is believed the grape was brought to Italy in 7th century BC by the Greeks. The grape is known for its aromas of ripe white melon and flowers, its clean, fresh flavours of pear, white peach and nectarine, and its medium body and mild, balanced finish.

NERELLO CAPPUCCIO
While nerello cappuccio usually plays a supporting role in red blends, Benanti bottles a rare 100 per cent cappuccio that showcases the typicity of the variety: freshness, plenty of pepper and spice, and with a similar acidity and minerality to a Pinot Noir.

NERELLO MASCALESE
Benantiâ€™s Contrada Monte Serra is 100 per cent nerello mascalese, matured for 12 months in 500 litre barrels of French oak, and is beautifully elegant, a â€œtrue expression of the elegance of the wines of Etnaâ€, as Antonio Benanti, who will soon be making a sparkling rose from mascalese grapes, describes it.

NERO Dâ€™AVOLA
Planetaâ€™s Santa Cecilia 100 per cent Nero dâ€™Avola from Noto DOC is a delight. The grapes go through 20 days of skin contact, maceration in steel, and 14 months in oak followed by at least a year in the bottle. It pairs well with heavier dishes of lamb or ragu. Ideal for ageing for up to 15 years, the 2005 vintage is especially noteworthy.