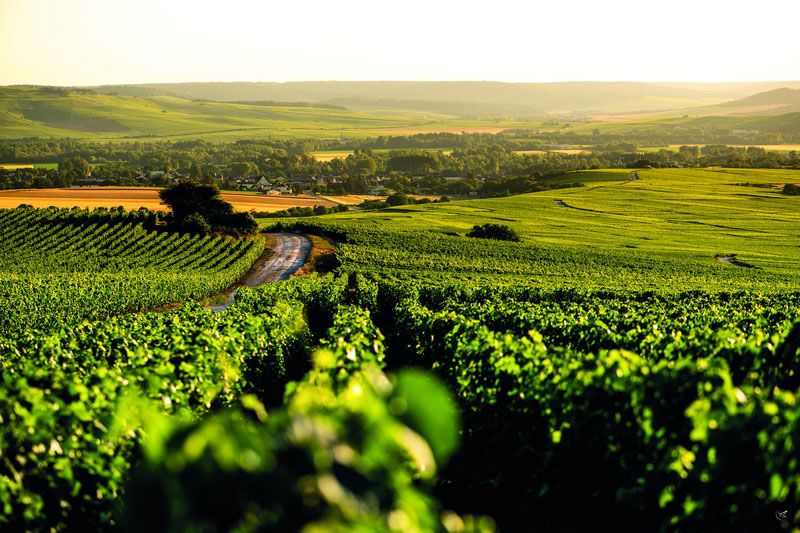 The popping of age-old tradition in the world of champagne.
Friday, January 10, 2020 By Editors

Champagne, the iconic drink of silver screen stars, industrialist heiresses and royal wastrels, has long represented all that is glamorous and indulgent in life. The big names, such as Dom Perignon, Krug or Bollinger, have cultivated an air of prestige, mystery and tradition for hundreds of years.

But a fresh new approach to champagne-making is bubbling up and challenging norms. Smaller houses are making unique and exciting expressions, exploding centuries of convention with every cork they pop. Wine critics are giving the best of them top scores, high-end restaurants are listing them on menus, and a new breed of champagne aficionados are keeping their glasses at the ready.

â€œChampagne is very special â€“ it inspires a fierce loyalty. Some people have their favourite, and drink it for 10 or 20 years, and donâ€™t ever want to change,â€ says Daniel Pires, chef sommelier at the Royal Champagne Hotel & Spa in Champillon, northern Champagne. â€œBut thereâ€™s growing interest in smaller labels. While the big brands are an easy choice as they are readily available, more people are looking beyond the well known into smaller champagne houses offering something a little different. Young winemakers are pushing the quality of these small labels.â€

This new generation is bringing a winemakerâ€™s approach to champagne: instead of â€˜bubblesâ€™ and â€˜blendingâ€™, the buzzwords are â€˜differentiationâ€™ and â€˜terroirâ€™. The concept of terroir â€“ the specific conditions, including climate, soil, and water, that give a grape its distinct flavour and aroma â€“ has long been crucial in wine, but in Champagne, due to the way in which grapes are traditionally grown and processed, the concept is only recently gaining ground.

Champagne producers are divided into houses (negociant manipulant, or NM as it appears on labels), co-ops (CM), and growers who make their own champagne (recoltant manipulant, RM). Unlike still winemakers, who often grow their own grapes, the big houses source their fruit from any of the 15,800 different growers in the Champagne region who often farm very small plots of vines. Growers own 90 percent of the appellationâ€™s vineyards.

The big houses compete for grapes from the best regions, the Grand Cru vineyards, and use grapes from many farmers. Reflecting the terroir of a particular vineyard is thus not usually possible; the big houses generally focus on expert blending to ensure quality and consistency.

Small growers making their own champagnes, however, are able to control and separately process grapes from specific areas, or even individual plots, highlighting specific characteristics. Penet-Chardonnetâ€™s 100 per cent Pinot Noir La Croix Lâ€™Aumonier, for example, is made only from one vineyard â€“ an eponymous south-south-westoriented estate in Verzy, a Grand Cru area in Montagne de Reims.

â€œWe focus on terroir, bringing a Burgundy approach to winemaking to champagne,â€ says Alexandre Penet of La Maison Penet, who has a 400-yearold family heritage of champagnemaking and now produces two terroirfocused ranges, Alexandre Penet and the premium Penet-Chardonnet. â€œI believe in this philosophy and the character it brings to our champagne. I focused my oenology degree on researching soil, and I have tested the soil in our vineyard plots. You can taste the differences in our wines. They also change from year to year due to climactic conditions.â€

Penetâ€™s tests on the soil at La Croix Lâ€™Aumonier reveal limestone with calcaric formations on top of a Campanian-age (Late Cretaceous) chalk layer. The chalky soil results in an intense minerality, which, as he is not blending to a recipe, Penet can choose to highlight or minimise through production methods.

La Croix Lâ€™Aumonier is aged for eight months in 400 or 500l oak barrels, skips malolactic fermentation (to reduce acidity), has long ageing on lees (dead yeast cells that lend a brioche flavour and can increase complexity), and a low dosage of 5g of sugar to make it both very complex and dry. It is, like wine, ideal to enjoy with food. Penet recommends pairing it with cheese such as comte, or white, or even red, meat dishes.

Bringing something unique to the market sets small growers apart from the big houses.

â€œWe canâ€™t compete with the big, standardised players,â€ says Penet. â€œBut weâ€™re well positioned in the Grand Cru region, so we focus on the purity of terroir, freshness, low dosage and complexity.â€

Jean-Pierre Vazart, who has various plots of vines dating from the 1950s in the Chouilly region, has been experimenting with his champagnes for the last 15 years. He renovated the Vazart-Coquart & Fils winery four years ago, installing high-tech metal presses. The machines do not speed up the pressing of the grapes â€“ champagne-making rules specify a minimum period â€“ but while wooden presses might look prettier, metal ones are superior, he says, crushing the grapes more gently. He installed two presses so he can keep harvests from different plots separate.

â€œWe have two plots that are divided from each other only by a tiny dirt road,â€ says Vazart, â€œbut the parcels on either side are quite different. Itâ€™s amazing â€“ one side never goes in our vintage bottlings (from grapes harvested in the same, exceptionally good, year) while the other side is fantastic.â€

He also uses many smaller tanks to age the wines separately from each other. He employs mainly steel tanks to maintain freshness in the wines, and while he uses no wood â€“ â€œmy father tried wood tanks but it was not to our taste, our house styleâ€ â€“ he is experimenting with terracotta, which can make the wines more open and fruity.

But one aspect of the champagne-making process in which he prefers to be natural is in the growing of the grapes. He is not alone; many small growers â€“ producers, and even Louis Roederer, which, despite its size, is effectively a grower, owning and farming many of its own organic and biodynamic vineyards, are now embracing sustainability. Still, overall only five per cent of vineyards in Champagne are organic.

â€œWeâ€™ve been organic now for 10 years but I started applying for the certification in 2017. What is important is to be organic, not to sell organic wine. My father was a sustainability pioneer and perhaps my daughter will take over from me and I would like to hand healthy vineyards over to her,â€ says Vazart. â€œI can see the difference in the vines after going more natural, and I can taste it in the wines â€“ thereâ€™s the same maturation but the acidity is higher, which is very good for champagne.â€

While the sustainability credentials of a champagne house might not always be listed, growerâ€“producers are, however, giving customers insight into the differences between their various bottlings through detailed labelling â€“ a boon for modern drinkers frustrated by the lack of clarity and information on many traditional bottles (but not all: Krug has explicitly listed the history of every bottling since 2011, and now has a dedicated app). Penet-Chardonnet places QR codes on its bottles so customers can access details of the contents via their mobile phone.

Armed with this information, drinkers can make more informed choices and expand their knowledge on the unprecedented variety of styles now on offer by small grower-producers.

Despite being very much still in the minority in terms of market share, these fearless trendsetters are changing the way wine lovers approach champagne.