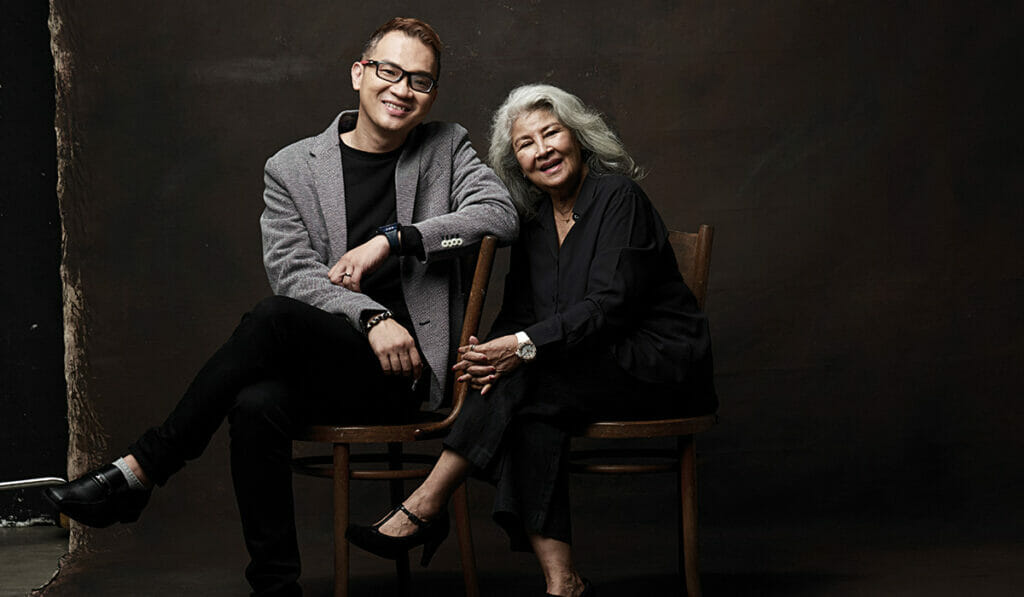 Datoâ€™ Dr Faridah Merican and Ian Chow reflect on how a love for the stage led to friendship off-stage at The Actors Studio.
Monday, October 21, 2019 By Editors

Dato’ Dr Faridah Merican, the First Lady of Malaysian theatre, speaks like the true thespian she is – measured and clear, her presence is felt when she enters a room, even though she brings no airs with her. She is delightfully amiable, and her warmth immediately sets anyone at ease. To say she is passionate about her craft would be an understatement, as she has been acting professionally since the late 50s and is now a passionate supporter (together with her husband, Joe Hasham) of the industry as a whole, co- founding theatre organisations such as The Kuala Lumpur Performing Arts Centre (KLPAC), Performing Arts Centre of Penang (PENANGPAC) and founding The Actors Studio Malaysia.

Joining her is Ian Chow, Group General Manager overseeing all three entities. Their paths first crossed in 1999 through a community choir co-founded by Faridah and Joe, The Young KL Singers. Chow had joined outside of his day job as a multimedia designer in the hotel and travel industry.

“After a year or two, they asked me if I was interested to produce with them, and I said yes,” Chow recalls, “That’s how I learned the tricks of the trade. Back in the late 90s and early 2000s, there was no tertiary education in the Performing Arts, or learning arts management – even now, there’s none.” KLPAC opened its doors on 9th of May 2005. The stunning 7,614 sqm structure in Sentul Park has become the touchstone of the modern theatre scene in Kuala Lumpur – and Chow came onboard fulltime then, learning the ins and outs of the industry under Faridah’s guiding hand. All in all, Chow has been with the organisation for 17 years now.

“Of course, when you see a person at the very beginning you don’t really know, you can just wish and hope that this would be the right calling for them,” Faridah muses. “When we spoke to Ian, we realised this young man has something to offer that we need. But the important thing is through the years Ian has shown us exactly the kind of development in a person who can be relied upon to take on much more than what Joe and I can do put together.”

But what exactly does mentorship look like in the arts? Neither of them can give a concrete answer. “It’s not written in the books,” Faridah concedes. “It’s something that we develop ourselves. We communicate with one another all the time – we have an open-door policy. You are not consciously mentoring anybody, but it happens in the days and weeks and months of our work.” Chow agrees, adding, “There’s also a lot of trial and error, and it’s a nurturing process, a one-to-one attention that is being given in these many years.”

There was indeed a learning curve, transferring between two unrelated industries meant learning on the job and stumbles here and there were to be expected. Still, Chow claims it was flexibility, trust, and freedom from Faridah that helped him grow in his own space and discover his capabilities. “Faridah as a mentor is not someone who will tell you to do A to Z, or ‘this is what I want you to achieve for this year’,” he says. “But there is a trust that has been formed that I need to achieve this on my own, and she lets me grow. Even if there are some mistakes, she’ll allow me to come back up and move on.”

Faridah adds in quick succession, “Ian is one person who goes way beyond what you think he is learning from you. He really does take the ball and runs with it, which is so good for both Joe and I because we have somebody we can truly believe in and trust. There’s a lot that goes into the running of that centre [KLPAC], so we need this kind of individual who has the determination and the unquestionable loyalty.”

“That came from the whole freedom, the style of nurturing that Faridah had with me,” Chow replies, “to find out what are my strengths and weaknesses, and how can I complement them [Joe and Faridah] and able to take the company to the next level. I would say that what I have achieved is how they have mentored me.”

Part of Faridah’s professional trajectory includes working at Ogilvy & Mather – joining when she herself had turned 30 – and she credits her leadership and mentorship style to what she learned in her 46 years with the company, together with her own mentor, Ogilvy contemporary Laura Kamaruddin. “I think I use the same techniques,” she says, “We try to develop individuals who can be independent, and who can even not necessarily step in my shoes, but move on even to higher levels. It is a real pleasure to know that maybe you may have played a small role in shaping the future of that person.”

However, leadership is a term she finds hard to align herself with. “I first came to this word ‘being a leader’ was when I was at Ogilvy, and I learned a lot then, because it is not easy to take on the responsibility of leadership,” she says, before adding modestly referencing her husband, “I don’t think I’m a born leader – I don’t know whether I’m a leader at all – Joe is a better leader than me. He has what is known as this wonderful, innate charm, so people listen to him. “I think that charm in leadership is necessary to make people who work with you love you a little bit more. Joe Hasham just gets things happening: when he needs to be firm, he does it, when he needs to be charming, he has it. That kind of leadership quality I would also like to learn.”

A lifetime in the corporate world has brought with it some precious lessons for Faridah. “The top thing I learned at Ogilvy was how to negotiate. You cannot run away from having to negotiate what you need,” she concludes. A skill, it turns out, that has come in useful with keeping The Actors Studio and the arts scene afloat over the years.

By great happenstance, The Actors Studio joins The Peak in celebrating their own 30th anniversary this year – and by no mean feat. They count this as their greatest achievement thus far: sustaining The Actors Studio, as well as the Penang Performing Arts Centre and KL Performing Arts Centre, “with a lot of blood, sweat, and tears, banging of tables, walking out of conference rooms,” Chow laughs.

“One of the things we’re still trying to achieve a breakthrough with is how to monetise our business, how to get – I’d hate to say the word ‘funding’ but how to get money for our industry,” Faridah adds rather matter-of-factly. “Either on our own or with help from corporations or the government. It is a huge plea that we have, to everybody in the country, to please support performing arts, because that’s how strongly we believe in it. If we didn’t believe in it, why are we here today?

“We’re still knocking on doors, we’re still talking to people. I have a very thick skin and I’m not at all embarrassed about saying to people, ‘we need your help’.” KLPAC has had several brushes with low funding, the most recent instance at the end of 2017. But this is not a problem particular to Malaysia, as Faridah explains “We talk to many bodies that take care of the arts, and almost all the stories are the same. From the time when I was much younger and going to directors’ workshops in India, for instance, the story is always about funding.

“We must find a way to make the industry attractive enough to keep the younger people in it because you cannot force them to work with an industry that cannot afford to pay them. We have the passing on of talent, the training, we have all that in place—but what makes people find the performing arts attractive enough is whether they can put money in their pockets, whether they can sustain themselves as a worker in the arts. We should not be expecting them to be working like when we started off…without any salary, really a pittance of fees as an actor. You can’t expect that to go on forever.”

THE WORLDâ€™S A STAGE

Both Chow and Faridah lament the lack of importance arts is given in the local Malaysian education system – “It’s been neglected for too long,” she says – and how it affects the value that our society places on the arts. Which is to say, not a great deal, as things currently stand. And yet, small steps are being made – the government has started up some sekolah seni (arts and culture schools), The Actors Studio has been running classes for many years for children from the age of three and above to learn performing arts skills, and this year they have announced they are joining hands with Taylors University to create the very first conservatory of the performing arts. The whole team, in Faridah’s own words, are “thrilled to bits”.

Her wish is that there will come a time where there will be a performing arts venue on every street corner in the country. For Chow, it’s seeing the arts formally introduced into the education system. “In any mature society, arts and culture is always looked upon at the same level as science,” says Chow, “And the thing I learned from Faridah is that science is food for your mind, arts is food for your soul. It exists hand in hand, and I don’t think one can go without the other.”

Until then, Faridah concludes with a simple clarion call: “Buy a ticket, and watch Theatre!”