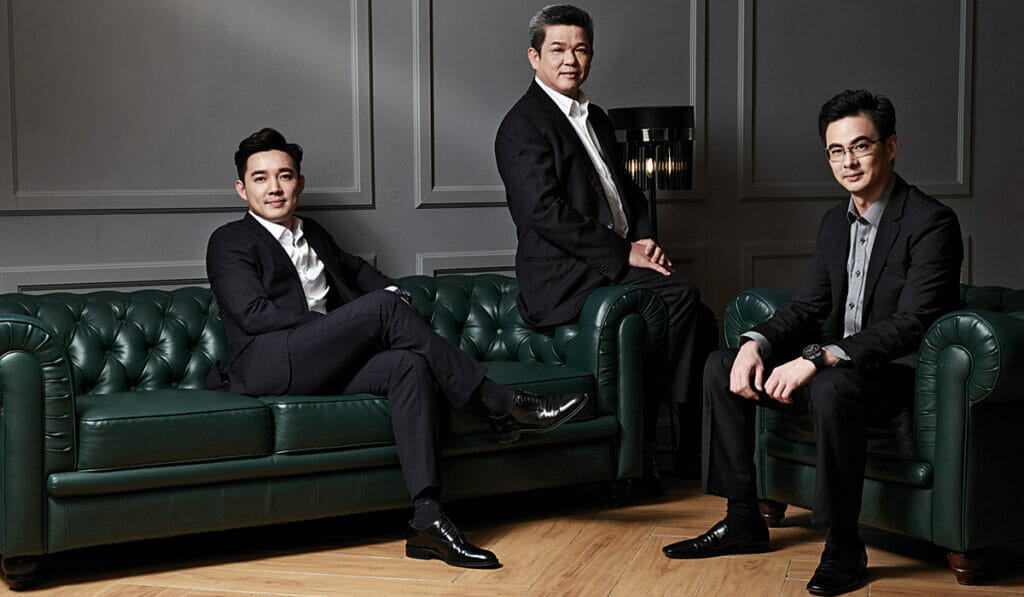 Under the guiding hand of their father Datuk Wira Eric Tan, Datoâ€™ Colin Tan and Datoâ€™ Edwin Tan are spearheading Hatten Group into a glorious future.
Wednesday, October 23, 2019 By Editors

Succession in family businesses is an intriguing beast. It may be almost a given for sons and daughters of successful entrepreneurs and tycoons to take over the reins when they come of age or experience. If the pieces of the puzzle fit well and coalesce favourably, this passing of the baton can go on to create a legacy, or a dynasty.

Datuk Wira Eric is, of course, talking about his protégés, Dato’ Colin Tan, 36, the Managing Director of the company, and Dato’ Edwin Tan, 37, the Deputy Managing Director, his two sons who joined Hatten whilst it was in the midst completing its first project in Melaka, taking over an abandoned site and transforming it into the now iconic Dataran Pahlawan Melaka Megamall.

Officially, this was around 2004 although Dato’ Colin says that both he and his brother had been helping out “here and there” since they were kids. “Child labour,” he jokes – both Dato’ Edwin and Dato’ Colin are university graduates in finance.

“My dad has always been very entrepreneurial, so I guess we always had in our minds that we would eventually help him in his businesses,” says Dato’ Colin. “He never forced us to join him, but it was subtly instilled in us. He would sometimes bring us with him to his office for business meetings when we were young, and even some of our family holidays were actually work holidays for him so all this became a norm for us.”

The pair of young men now handle and support each other in managing the A to Z of Hatten (from asset management to investment portfolio and finance), with their father mainly involved in the more strategic role of procuring new businesses and focusing on planning for the future of the company.

So, what is it like to be working with your father and how do you draw the line between viewing him as either father or business mentor?

“One of the really great things about having my father as my business mentor is that you know that, when you face difficulties, you will always have someone you can talk to, help find a solution and encourage you,” says Dato’ Colin. “I have friends who own start-up companies and I often observe that they have no one to turn to when they face difficult problems. They also don’t have someone to imitate in that sense.”

Dato’ Edwin agrees and offers this when asked if there were any pitfalls instead: “The biggest one I can think of is that my brother and I were both educated in a more Western style of business management, whereas I think my dad is more what we can call the ‘Chinaman’ style, which boils down to we must take care of the family, we don’t forget our roots and we don’t forget the people who have helped us.

“From a Western management perspective, we are taught that training staff is important, so we have clashed before on whether we are spending too much time training a person versus simply hiring the right person already equipped to do the job.”

Dato’ Colin chips in: “The other thing, I guess, is the blurred lines when it comes to business and family time. So often, when we sit down together as a family to have dinner, we end up talking about work!”

“But sometimes we use this to our advantage,” says Dato’ Colin. “If he is really, really upset with us about something, then we use the son tactic to try and calm him down.”

“Yes, they know how to tackle me and my moods,” agrees Datuk Wira Eric, as he laughs along.

From casual observation, the trio appear to share a very natural and close bond. In fact, you could even suggest that the dynamics and chemistry of that familial link has served to strengthen their business unity, which, in turn, has translated into the modern evolution and growth of Hatten today, something which Dato’ Colin is eager to stress is down to all of their contributions, and not just the two younger Tans.

“My dad may be old-fashioned in some ways, but he is also very modern in many other ways,” he says. “For example, we were recently talking about possibly venturing into blockchain and, yes, it was his idea, not ours. So he can be a front runner in terms of new ideas and he is pushing us to do something about it.”

Originally from Singapore, the Tan family have now made Melaka their second home, pushing on after Dataran Pahlawan Megamall Melaka and developing more high-profile projects in the state in a bid to transform Melaka from a small, sleepy state capital city into a vibrant and progressive tourist destination.

“In 2004, Melaka’s tourism arrivals were around two to three million. But after we did some research, we realised that Melaka has a lot more potential. It has a lot of history; the location is relatively central, with a catchment of around 15 to 17 million people within a 250km radius. So, we decided to try and do something different in an attempt to make this mall a must-visit for Melaka visitors,” explains Datuk Wira Eric.

Since then, Hatten has further cemented that ambition for Melaka, having now completed Phase 1 of Hatten City, an integrated mixed development that consists of Elements Mall, Skydeck (which offers 360° views of Melaka), Hatten Place, Silverscape Residences and DoubleTree by Hilton. Other projects include Imperio Mall & Residences, a mall called Vedro by the River, located by Melaka River, and Harbour City on Pulau Melaka, which features not only a mall and hotel but also a theme park.

Hatten is also casting its eyes further afield and is on the precipice of completing projects in Seremban and Cyberjaya, with projects in Laos, Australia and Indonesia also on the cards.

“We are also looking at Sabah, specifically Sampoerna, and aiming to create another Melaka concept there,” reveals Dato’ Edwin. “Tourism is already quite strong there and, even though there may be some general concerns about security in that region, we are confident that if we can solve the problems that exist there, then it can become the next boom area. For us, it is about seeing the value in things and this is something we learnt from our father.”

This is Datuk Wira Eric’s version: “If you see something as gold, then it becomes gold.”

Hatten is in no mood to slow down. In fact, Datuk Wira Eric points out that the company has taken upon itself to refine the way it does business. Whereas the majority of developers wipe their hands clean after completing a project, Hatten now practises what Datuk Wira Eric terms ‘Build, Sell, Manage, Operate’.

This strategy ensures that quality control is retained within the Hatten at all stages and beyond, but of course, it also means that the workload is multiplied significantly, something which Datuk Wira Eric is more than aware of.

“Sometimes, I do have quiet regrets about bringing them into such a tough business, so I always remind them that they must enjoy what they are doing, otherwise they shouldn’t be doing it,” he muses. “But both are strong characters. And since they have been able to take the stress that I have given them, I know they will be able to handle the stress that they will surely face from the outside.”

He continues: “After 15 years, I believe they are both more than capable of managing this company. In fact, I think they have grown faster than me in that sense. They do think differently from me a lot of times, but the way we approach things is that we treat problems as our ‘friend’, and so it becomes easier to solve them. I always tell them we should never run away from our problems.”

Says Dato’ Edwin: “My dad has been through so many ups and downs, but he has always overcome them. His resilience has been a key lesson for me. Another is his advice that if a problem is too big, you can break it down into 100 pieces, and if the 100 pieces are still too big, then you can break them down to a thousand pieces. And then you tackle them one at a time and, by the end of it, you have solved a big headache.”

Dato’ Colin offers his perspective: “For me, I have learnt from my dad is that being humble is the most important thing. This is his best quality. He is always hospitable to anybody and everyone. If anyone calls him for help, he will always try his best to do so. That is his style. It is a little different for my brother and me. We aren’t as forgiving as our dad in this respect. If today, someone does something bad to him, he will still treat that person like a friend the next day. He basically doesn’t have any enemies.”

Datuk Wira Eric reinforces this idea: “This was the one thing I’d always wanted to teach them. That they had to be honest, which is a lesson my own father taught me. You must treat people well and help people even if they cheat you. I tell them this because I believe that people don’t set out to cheat you. Things like that happen not because they want to cheat you but because they may have needed your help at that point of time. This is very important to me.”

It would seem then, that with this set of father and sons, the apples truly do not fall far from the tree. And even if the following words were not spoken, it is quite evident that Datuk Wira Eric radiates pride and no prejudice whenever he talks about his sons.

“Yes, I am very proud of both of them,” he says. “I don’t say this to them very often, but I am happy to know they both have good hearts and are willing to help people. And they never give up. So, I feel secure knowing that they will only fail if they themselves give up.”