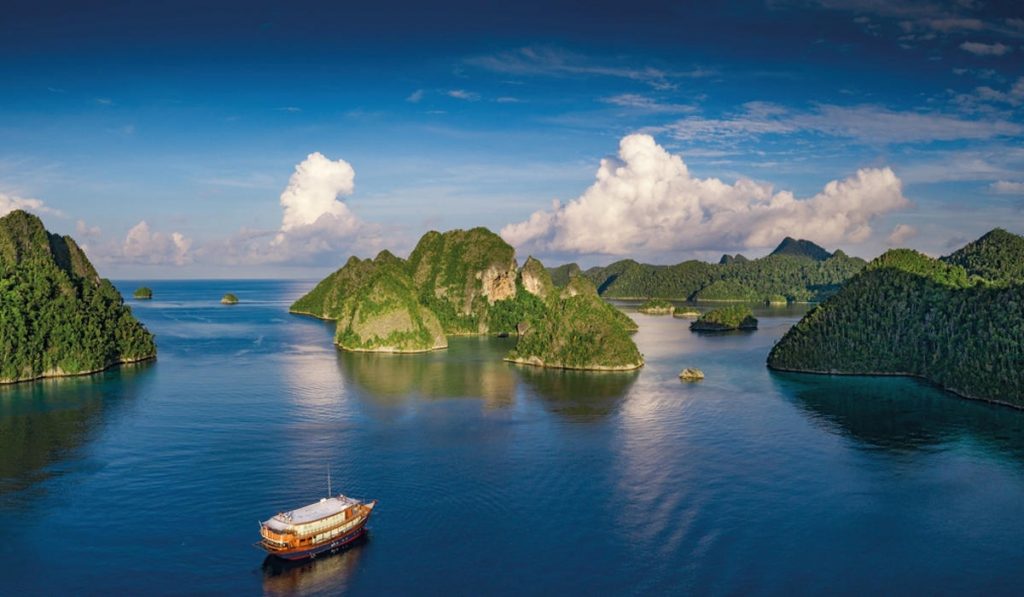 Discover the beauty of Raja Ampat, one of the most biodiverse marine habitats on Earth, with a private yacht charter Rascal Voyages.
Friday, June 29, 2018 By Editors

Few places on earth live up to the hype quite as well as Raja Ampat. This bucket-list destination for divers has been described in ecstatic terms for more than a century â€“ and for good reason. Its unspoilt wilderness is the stuff screen savers are made of. Jagged limestone karsts rise majestically from crystalline waters, thick with marine life. But you donâ€™t need to be a diver to appreciate this exquisite archipelago in West Papua, Indonesia.

â€œSituated upon the equator, and bathed by the tepid water of the great tropical oceans, this regionâ€¦ teems with natural productions which are elsewhere unknown,â€ wrote Alfred Russel Wallace in his 1869 book, The Malay Archipelago.

The British naturalist and explorer spent eight years sailing through South-east Asia. His time in Raja Ampat, surveying the unique flora and fauna, helped shape Wallaceâ€™s theory of evolution, which predates Charles Darwinâ€™s published works. Indeed, the archipelagoâ€™s beauty is more than skin deep. As the most biodiverse marine habitat on earth, its roughly 1,500 islands, cays and shoals are home to 75 per cent of the worldâ€™s coral varieties.

A protected marine reserve, new species continue to be discovered in Raja Ampat, which translates to Four Kings â€“ a nod to the four main islands, Waigeo, Batanta, Salawati and Misool.

Today, most travellers see Raja Ampat the same way Wallace did â€“ by boat. And fellow Brit Erik Barreto wants to ensure the journey is as superlative as the destination.

Practical tips before you start your Raja Ampat journey.

From Singapore, the easiest route is via Jakarta, from where you can catch a flight to Sorong. Most liveaboards and dive resorts pick you up from there.

Go during the wet season, from October to April, when the winds are milder. There are frequent heavy showers but theyâ€™re usually brief and followed by long sunny periods.

Rascal is available for private charter only, for a minimum of five nights. Nightly rates start at US$8,500 (S$11,000) for full board, and vary depending on itinerary and season. Visit www.rascalvoyages.com.

Wi-Fi is limited or non-existent. Prepare to switch off.

The masts have been replaced with five above-deck double cabins, replete with mod cons such as air conditioning, en suite bathrooms and Hamptons-inspired decor. A team of 10, led by cruise director and dive master Gaz Phillips, ensure guests are well looked after.

Our journey begins with a pickup from the city of Sorong on Rascalâ€™s inflatable Zodiac dinghy. Once aboard the phinisi, our captain sets a course for Aljui Bay, 11 hours north. We dine on chicken satay and the best bruschetta Iâ€™ve had outside of Italy, before retiring to our cabins, where weâ€™re rocked to sleep by the gentle side-to-side motion of the boat.

As I open the cabin door in the morning, Iâ€™m struck by the beauty beyond the deck. Limestone cliffs strewn with palm trees plunge into pristine sea, like the tropical equivalent of a Norwegian fjord.

Thriving in Aljui Bayâ€™s sheltered waters are some of Raja Ampatâ€™s finest macro sites and easy-to-access night dive sites. Itâ€™s also home to vividly coloured fire urchins. The kicker? I donâ€™t dive. My companions do but theyâ€™re out of practice, so Phillips suggests we save the underwater exploration for a location better suited to finding oneâ€™s flippers.

Instead, we head to the nearby village of Selpele. This tiny speck on the edge of the world offers a humbling example of humanity. Smiles and high-fives greet us as we wander the dusty paths between huts and the local school. We stay just long enough to recognise our luck at being able to stumble off a boat and into peopleâ€™s lives, and to be welcomed as a friend.

Many of the villagers work a few kilometres away at Cendana Indopearls, one of the regionâ€™s largest pearl farms. On a tour, we learn each pearl grows in the bay for four years before being harvested.

Four and a half hours north, in Wayag, weâ€™re greeted by a manta ray feeding on plankton on top of the water. It glides silently alongside the boat, mouth open, before slipping below the surface. The lagoon is a manta cleaning station so sightings are common.

But thereâ€™s another sight that competes with these gentle giants: the view of Wayag from the top of Mount Pindito, a 200m-tall limestone karst. According to Phillips, most people â€œhikeâ€ to the top in 20 minutes. But as I scale the near-vertical rock face in 80 per cent humidity, I suspect he has undersold its degree of difficulty.

Anticipating the view, I recall Wallaceâ€™s description of the rocky islets, â€œmostly mushroom-shaped, from the water having worn away the lower part of the soluble coralline limestoneâ€. When I reach the summit 45 minutes later, I wedge myself into the craggy pinnacle and claim my reward: a spectacular 360-degree view of island-studded sea.

Moments after we slip into the water in Wofoh, four hours south of Wayag, a companion resurfaces and spits out his snorkel. â€œThere are two blacktip sharks underneath us!â€ he exclaims, before disappearing to examine them further.

We snorkel to a nearby islet, passing clusters of coral surrounded by schools of electric blue and yellow damsels, and zebra-striped schooling bannerfish. Rainbow-coloured parrotfish chew loudly on the coral. And the eternal crowdpleaser, the false clown anemonefish, also known as Nemo, make an appearance. My companions dive, returning from the deep with tales of green sea turtles.

After a candlelit barbecue dinner on the beach, the magic continues back on the boat. We roll out towels on the top deck and watch the sky burst with stars.

â€œItâ€™s like a big black blanket covered with twinkly bits,â€ says my companion. Laughter soon turns to â€œwowsâ€ as several shooting stars arc slowly across the great inky canvas above.

Water as clear as glass reveals a coral reef along the edge of mangroves in Yanggefo, three hours south of Wofoh. A party of divers blow noisily on whistles as they surface â€“ most likely having seen dogtooth tuna, and giant trevally, if not a wobbegong shark â€“ and are collected by a dinghy.

We take Rascalâ€™s kayak in search of what Wallace called the â€œmost extraordinary and the most beautiful of the feathered inhabitants of the earthâ€, the bird of paradise.

But Yanggefo is home to another elusive yet deadly beast, the saltwater crocodile, so weâ€™re advised to keep an oarâ€™s length from the mangroves.

Alas, we see neither. Instead, we return to Rascalâ€™s deck to catch a spectacular sunset displaying hues of electric tangerine and cotton-candy pink deepen into vivid purples and golds. Even the crew members emerge to watch it. No one speaks, awestruck by natureâ€™s theatre playing out before us.

Itâ€™s a fitting finale to a memorable trip, and yet another reason Wallace called Raja Ampat â€œone of the most singular and picturesque landscapes I have ever seenâ€.