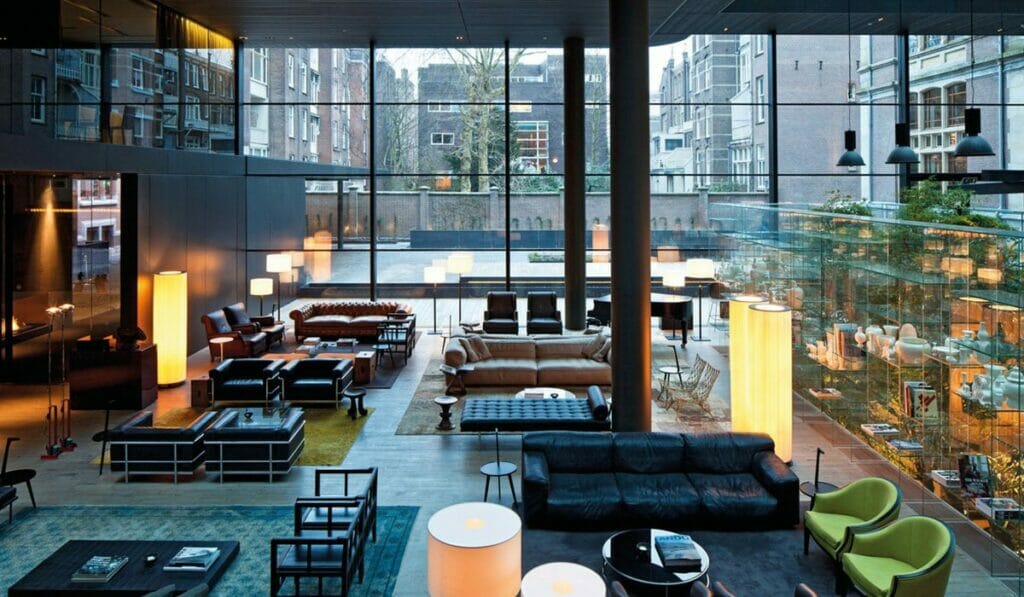 The inventive spirit of Dutch design is on full display here.
Friday, October 20, 2017 By Editors

The Dutch, itâ€™s said, arenâ€™t afraid to be normal, because for them, â€œnormalâ€ is â€œstrange enoughâ€. I experience this worldview first-hand when my assigned host, Wes Viana Ferreiro at Amsterdamâ€™sÂ Conservatorium Hotel, offers me a chocolate bar from Dutch brand Tonyâ€™s. He tells me that, unlike most chocolate bars with even sections, this one is designed with uneven bits, because thatâ€™s how the world actually is â€“ which is to say, irregular and unexpected.

That chocolate bar is a micro representation of the hotel itself. To be sure, the historic facade that passers-by see from the street, in the heart of the cityâ€™s Museumplein district, hides cutting-edge design that combines vegetation with steel; bricks with glass; and arches and mosaics with industrial beams. The stunning blend of these disparate elements has helped establish the five-year-old Conservatorium as a leading luxury hotel in the Netherlands â€“ the choice of A-listers like Madonna, Rihanna and Justin Bieber.

The eclectic interior of the hotel reflects its evolution, which started at the end of the 19th century when Dutch architect Daniel Knuttel designed the neo-gothic building that forms the hotelâ€™s core. Tiles featuring bees andÂ hives along passageways point to its postal bank beginnings, while a cluster of hanging violins at the entrance of the historic wing marks its incarnation as a music conservatory in 1983.

In 2008, Milanese architect Piero Lissoni was brought in to transform the building into a hotel. He introduced a multi-storey glass atrium, and a minimalist aesthetic to its 129 guest rooms â€“ injecting elements of space and light that characterise contemporary design.

I arrive to the sight of a bronze statue ofÂ Miffy, a popular Dutch rabbit character, adorning the entrance. The lobby, housed within the modern glass atrium, is dubbed the â€œliving room of Amsterdamâ€ for its stylish, laid-back ambience and its popularity as a local hangout. Here, well-heeled guests lounge on low seats, flanked by a line of trees that brings the outdoors into the space.

The hotel assigns a host to every guest upon arrival to help create a bespoke experience of the city. The genius of the service is clear: As soon as I check in, I can immediately opt for a walk to Amsterdamâ€™s Nine Streets, a design-centric neighbourhood full of quirky shops, with my host Ferreiro.

LOUNGING SPACE The lobby is known as the â€œliving room of Amsterdamâ€.

While admiring picturesque views of canals, I discoverÂ why the Dutch are inclined to define luxury along the lines of innovation, and not merely opulence. â€œThe Dutch are not very emotional people,â€ he explains. â€œWe donâ€™t really like to flaunt our wealth. We believe in living an honest, modest life, with nothing to hide.â€

While awaiting my flight at Amsterdamâ€™sÂ Schiphol Airport, I catch sight of Dutch designer Maarten Baasâ€™ Real Time in Lounge 2. Hung from the ceiling, the 3m-high timekeeper shows a handyman painting the minutes behind a translucent dial. Itâ€™s a fi lm projection, but looks remarkably real. Iâ€™m once again reminded of the power of Dutch design: To turn the ordinary into the extraordinary and to put a smile on your face.

Considered one of the Netherlandsâ€™ top industrial designers, Jongerius has worked for brands such as Vitra, Ikea and Camper.