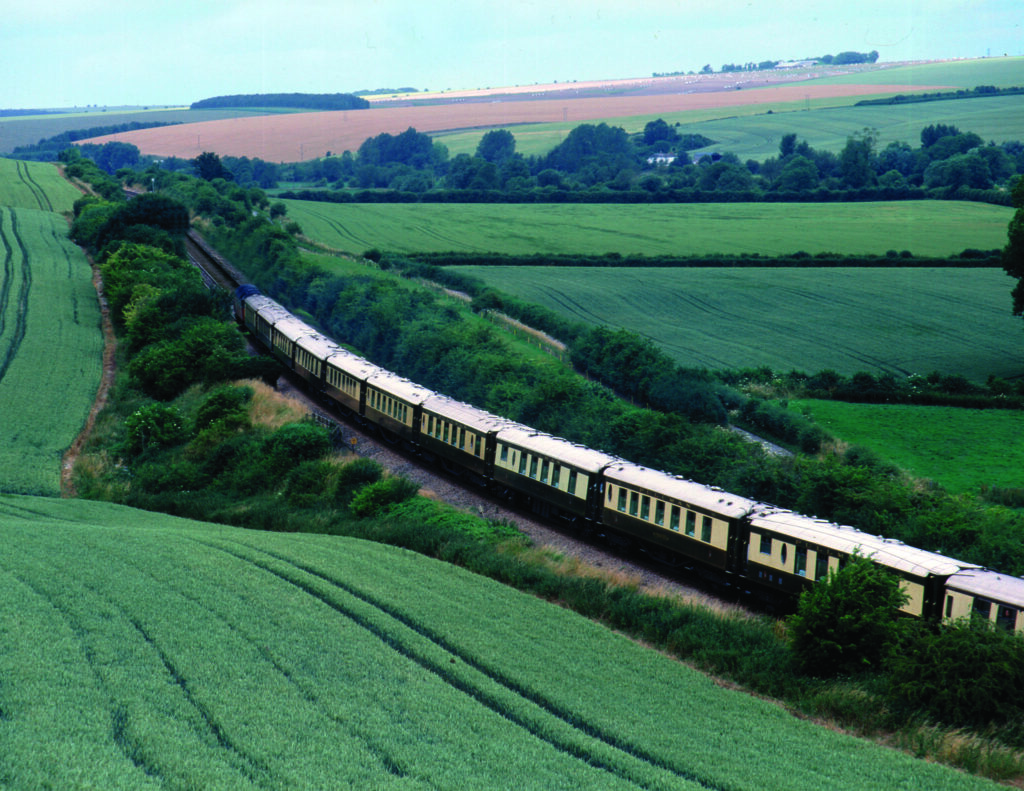 Wes Anderson has reimagined the Cygnus carriage aboard the legendary British Pullman, A Belmond Train, England.
Tuesday, October 26, 2021 By The Peak Malaysia

Luxury train travel is often wistfully remembered as a bygone era of the silver screen, where the world of the 1920s came alive with exquisite glamour and marquetry that would set the tone for some of the world’s most famous murder mysteries and heart-wrenching romances.  The luxury train was immortalized in Agatha Christie’s Poirot where the Orient Express and the Blue Train became the backdrop of her popular whodunnits.

The British Pullman, a Belmond train, was founded by George Mortimer Pullman who brought his business to Great Britain to operate his luxury train service, with its sumptuous 1920s carriages, each bearing its own whimsical name and vintage history against the backdrop of the beautiful English countryside.  The carriages that once carried Britain’s royalty as well as famous silver-screen stars, went through a delicate restoration in 1982 and has retained their period charm and elegance since.

Wes Anderson who has had a love for trains and a passion for craftsmanship had praised the train’s vintage charm in the past and has now paid tribute to the golden age of cinema and travel through an exclusive partnership with Belmond.  Commenting on the design collaboration, Wes Anderson says, “I love trains! I have often had the chance to invent train compartments and carriages in my movies — so I was immediately pleased to say ‘yes’ to this real-life opportunity and very eager to make something new while also participating in the process of preservation which accompanies all the classic Belmond train projects. They are keeping something special alive; – igniting this endangered species of travel into a new golden era.”

Wes has reimagined the Cygnus carriage aboard the British Pullman, where the carriage is instantly recognisable through his signature symmetrical lines, unique colour palettes and art nouveau style.  The Cygnus carriage features two new private coupés elevating the guest experience to a new level of luxury.  Beginning at London Victoria, the intimate space with 360-degree handcrafted marquetry exclusively holds up to 4 guests who would enjoy priority boarding and free flow of champagne throughout the journey.  Guests can also travel in the open carriages of the Pullman or choose to book the entire carriage for groups and celebrations up to 26 people.  Contemporary British menus are served on special crockery, with additional flourishes from British Pullman’s Head Chef and exclusive cocktails served in glassware only available in the private coupé.

Arnaud Champenois, Senior Vice President, Brand & Marketing, Belmond, comments, “At Belmond we are custodians of timeless heritage. We are always seeking new ways to remain relevant and create new legendary adventures. It is our mission to keep the travel dreams alive by collaborating with the most creative talents, who share our passion for design and craftsmanship.  It has been a privilege to work with Wes Anderson who is one of the most captivating story tellers in the world and a true legend.”

The British Pullman offers several sensational journeys throughout the year from London Victoria Station where you’ll start and end your day in style on board.  To book or for more information visit belmond.com or call +44 845 077 2222.