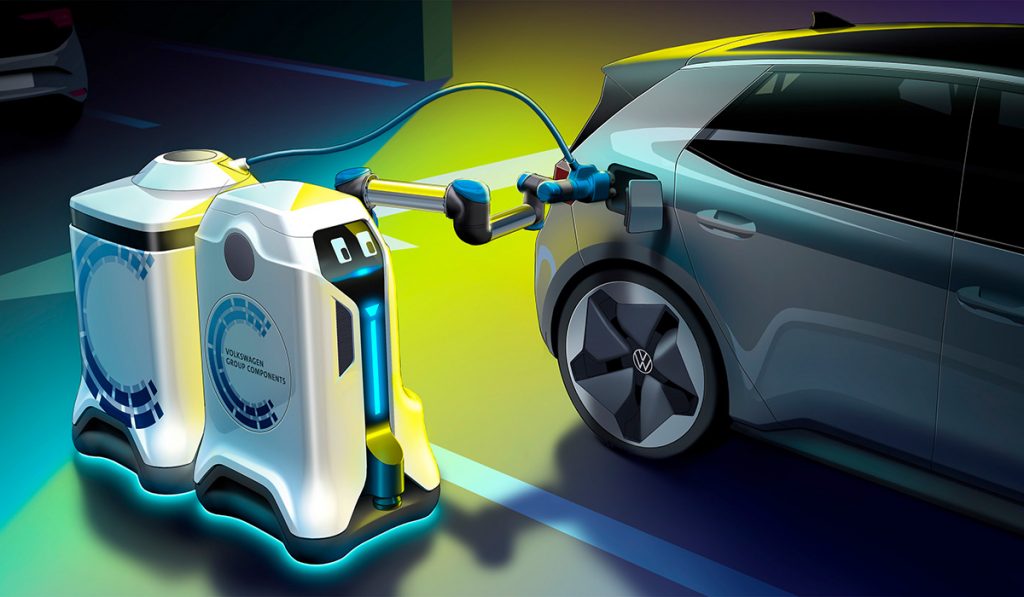 Volkswagen presents a new charing concept that will help turn every parking space into a charging point.
Tuesday, January 14, 2020 By Jx Chong

You may have heard of electric vehicles (EVs) this year and how they are set to take over conventional petrol vehicles in the future, instead of going to a petrol station, you would go to a charging station to recharge your EV. Now, Volkswagen is taking that concept one step further by introducing automated robots that will charge your EV for you without having to go to a fixed charging station.

Volkswagen believes this prototype robot is not that far from being a reality and would be very useful to EV drivers who will be able to park in any available space they find in a commercial parking lot. Instead, these compact, self-driving robots are loaded onto “battery wagons” in parking garages and when a request comes through via an app, the robots will be deployed and move around freely through the car park through the use of cameras, laser scanners and ultrasonic sensors to avoid obstacles and deliver an electrical charge of 50kW to the vehicle.

Depending on the size of the parking area or the underground car park, several charging robots can be employed simultaneously so that several vehicles can be attended to.

For parking operators, these automated robots are a quick and easy solution to electrify every parking space. The compact design of the charging robot is perfectly suited for use in restricted parking areas without charging infrastructures, such as underground car parks. Adding to that, there would no longer be any issues of charging stations being blocked by other vehicles.

According to Volkswagen Group Components’ Head of Development Mark Möller, “The mobile charging robot will spark a revolution when it comes to charging in different parking facilities,
such as multistorey car parks, parking spaces and underground car parks because we bring the charging infrastructure to the car and not the other way around. With this, we are making almost every car park electric, without any complex individual infrastructural measures.”

While the concept of autonomous robots charing our vehicles while we go about our day certainly sounds cool, Volkswagen has not stated when the charging robots would eventually be deployed in the real world. There is no doubt that this concept could go a long way to driving greater adoption of EV vehicle as it removes one of the biggest and most immediate hurdles during the transition from petrol to electric: the lack of dedicated charging bays.

But Volkswagen is not the only player in town, eyeing for a piece of this potentially lucrative pie. Tesla is also mulling a similar concept though it hinges on using an automated robotic arm to deliver a charge to its EVs. Admittedly, while technically impressive, this still requires a vehicle to be parked in a dedicated bay.

Only time will tell which concept will eventually win in the end but if Volkswagen’s idea of autonomous charging robots takes off, this could be the spark to jumpstart the electric revolution.