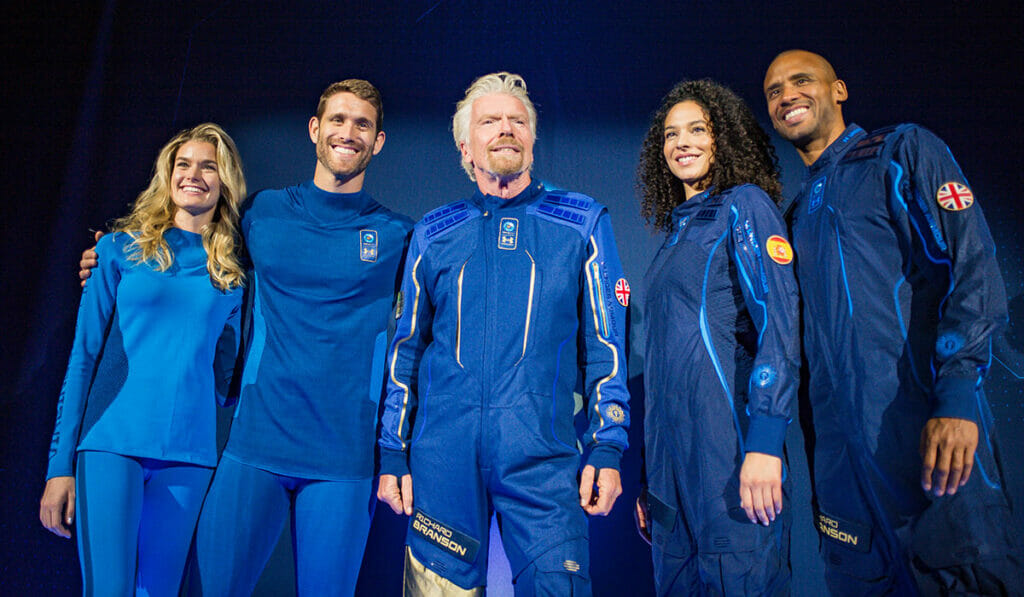 Virgin Galactic shows the spacegear that the first tourists can expect to wear on their trip up to space.
Monday, October 28, 2019 By Jx Chong

As part of the USD250,000 ticket to space on Virgin Galactic’s rocket-powered planes, passengers will get to wear and keep high-tech garments that are designed to be both functional yet stylish at the same time.

Now before we get ahead of ourselves, the gear is nothing like the bulky spacesuit we see astronauts don during their spacewalks and neither is it like the plain one-piece jumpsuits astronauts wear when they are inside the International Space Station. Instead, the spacegear appears to be lightweight and flexible, a sort of hybrid between sportswear and a jumpsuit.

But as Branson puts it during an interview, he thinks the experience of going into space should be sexy. Hence, the suit also needs to be sexy.

To do this, Virgin Galactic enlisted the help of athletics apparel maker Under Armor to collaborate and develop the space gear – which consists of a spacesuit, base layer and boots.

Under Armor described the base layer as a second skin to the body that promotes blood flow during the high and zero G portions of the light as well as manages moisture and temperature of the body.

Aside from that, there is the Spacesuit itself that is worn over the base layer. Though designed to be form-fitting Under Armor claims the suit makes it comfortable for passengers during the broad spectrum of temperature changes and it provides additional cushioning in high impact areas like the shoulders and neck during high G portions of the flight.

Last but not least is the space boot which takes inspiration from racecar driver’s footwear. These boots are nothing like the big, bulky astronaut boots that are previously worn and are actually quite lightweight with ample amount of cushioning for comfort and has flame-retardant properties too.

(Related: Skai’s High-Tech Electric Aircraft Is Able to Fly Over 600km And Runs On Hydrogen)