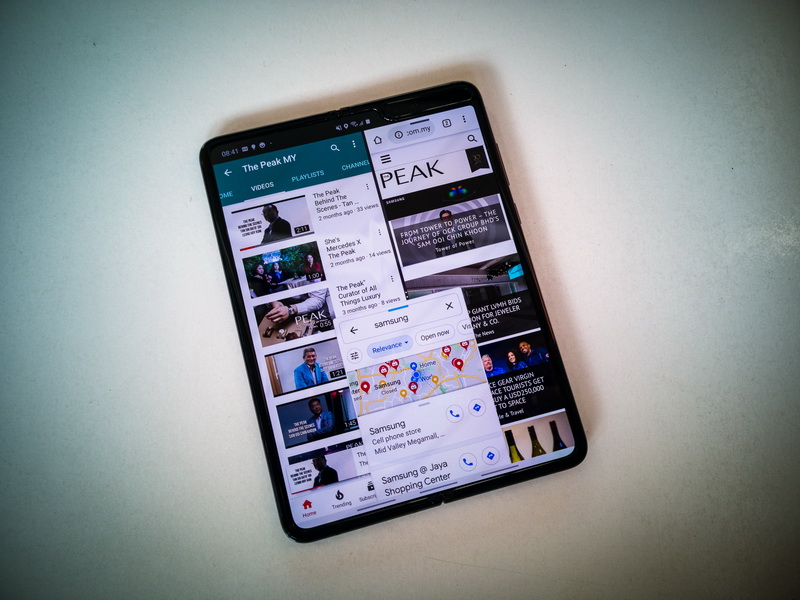 Samsungâ€™s Galaxy Fold defies conventions to deliver a mobile experience unlike any other.
Wednesday, November 20, 2019 By Jx Chong

There comes a time every decade when technology makes a giant leap forward, leading to a category-defining device that others will follow. In 2007, that leap forward resulted in the birth of the modern smartphone.

Now in 2019, the Samsung Galaxy Fold is that game-changing device that will set the bar for every other device that comes after it.

There is no question that the Galaxy Fold is an ambitious device, one that firmly belongs on the list of must-have luxury items of 2019.Â Â

The experience of owning a Galaxy Fold really is unlike any other smartphone you have purchased before it. Samsung has gone out of its way to place you, the customer, in the centre of the experience by offering a concierge-like Premier Service complete with dedicated support staff to set up your new smartphone so you can use it immediately. For peace of mind, Samsung is also offering a 24/7 Premium Careline with a dedicated team, one call away, to assist you.

Externally, the Galaxy Fold has a sleek clean design with reflective surfaces and rounded edges that invoke the feeling you are using a very expensive and sophisticated device. On the front is a 4.6-inch Super AMOLED cover screen that functions very much like a normal smartphone.

On the side, you will find the volume, power buttons and fingerprint reader lined in a row. On the bottom sits the USB C charging port, there is however no headphone jack to be found. Even so, Samsung has included a pair of their Galaxy Buds wireless earphones in the box so you can immediately start listening to your favourite tunes upon unboxing your Galaxy Fold.Â

Everything about the Galaxy Fold centres around its unique folding form factor. There really has not been any other device like this to date and it feels like you are holding a piece of the future in your hand with the Galaxy Fold.

When you unfold it for the first time, you canâ€™t help but marvel at the massive 7.3-inch Infinity Flex Display that offers so much interactive screen real estate that it feels like you are holding a small tablet in your hand.Â

In addition, there are two speakers on the top and bottom of the phone that provide clear and loud stereo sounds by AKG. You can enhance your audio experience even further by turning on Dolby Atmos that creates three-dimensional sounds that pull you right into whatever content you are watching be it movies, games and more.Â Â

You get truly immersive viewing experience when you are watching Netflix videos, boosted by the two stereo speakers on the side and everything from websites, Facebook, Twitter and Instagram look so good that it is difficult to revert back to using a smaller screen.

One such example is the amazing new Multi Active Window, a game-changing feature that takes multitasking to a whole new level. By activating Apps edge with a quick swipe from right to left, you are able to access frequently used apps and open up to two additional apps on the main display.Â

This brings the number of apps you can use simultaneously to three which is perfect if you are very busy and need to get a lot of things done. For instance, you can check your email, navigate to your next appointment in Google Maps and make changes to your documents or spreadsheets in the next.

The beauty of the feature is that you can freely move and reposition the apps from one of the small windows on the two smaller windows on the right to the large one on the left to best suit what your needs.

Six Cameras In One Fold

If you can believe it, the Galaxy Fold has more cameras than you could possibly imagine. It has a total of six cameras with one selfie camera above the cover display, two selfie cameras nested within a notch in the main display and three cameras on the rear.

Thatâ€™s more cameras than you really need in a day but if you really like taking selfies the Galaxy Fold is excellent as it carries over many of Samsungâ€™s innovations from its top-line flagship devices such as Live Focus that blurs the background and make you, the subject, standout.

More than just a great tool for taking selfies, the three rear cameras open a whole world of photographic possibilities. The versatility offered by the wide, telephoto and ultra-wide camera is just astounding as you are able to quickly switch between cameras for different situations, it is akin to carrying a whole bag of DSLR lenses but cramming them all into one device.

With that said, the Samsung Galaxy Foldâ€™s arrival signals a new age for smart devices. The age of the foldable smartphone.Â

For more information on the Samsung Galaxy Fold visit samsung.com/my/smartphones/galaxy-fold/.