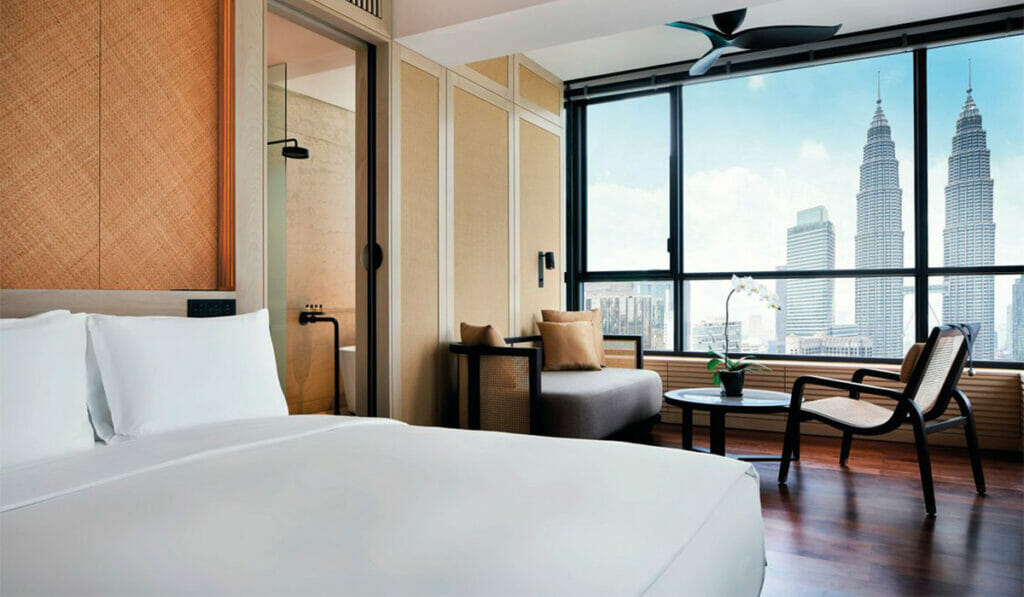 The latest luxury hotel to open in Kuala Lumpur is a jewel in the city’s new crown of upmarket getaways.
Monday, February 18, 2019 By Editors

Being just an hour’s plane ride away from Singapore, Kuala Lumpur shares a similar brand of cosmopolitan allure: a gleaming wonderland of skyscrapers with a wide array of enticing cuisine amid lush tropical foliage. Now, luxury travellers have a surfeit of choices when it comes to luxury accommodation, thanks to no less than six high-end openings in 2018 alone.

The last for the year is The Ruma Hotel and Residences located in the heart of town, the KLCC central business district. “This trend largely reflects the growing importance of Kuala Lumpur as a major business and meeting city in South-east Asia,” shares Lai Voon Hon, group managing director of Ireka Corporation, one of the developers behind The Ruma, in addition to Aloft and Westin in Kuala Lumpur. “All well-known international hotel brands are keen to have a presence here. The leisure and travel market here has also increased in number to over 25.9 million tourists arrivals in 2017.” That figure was five million less than 10 years ago. In that time, tourism receipts surged by more than 50 per cent, from RM53.4 billion to RM82.1 billion.

The Ruma is a hop, skip and jump away from Petronas Twin Towers.

The hotel was developed by Urban Resort Concepts, the same outfit behind Shanghai’s Puli.

As part of a wave of hotels that plugs the gap in luxury accommodation in KL, The Ruma boasts a number of significant firsts: It’s the first development by Urban Resort Concepts – which also manages the sophisticated Puli, Puxuan and Pushang hotels in Shanghai, Beijing and Xiamen respectively – outside of China. It is also the only hotel in Kuala Lumpur to join The Leading Hotels of the World (LHW), a collection of over 400 luxury properties in 30 countries.

“The Ruma’s attention to design detail, and luxuriously appointed guest rooms and suites perfectly complement our new form of guest experience called ‘Hostmanship’, which is unlike any in the region today,” Lai adds. “Hostmanship is a culture of making guests feel at home, and doing away with the usual charges for things like in-room breakfasts and the mini bar, and undue bureaucracy, such as having rigid check-in and check-out times.”

Ruma’s 253 rooms and suites were designed by Shanghai-based architecture and interior design firm MQ Studio, and it has taken care to draw on cultural influences with the use of handcrafted, artisanal furniture. Local fashion designers have been roped in to add to the aesthetic as well. Bernard Chandran’s metal sculpture, “Kebayaku”, serves as the lobby’s showpiece, while Joe Chia, who has previously collaborated with Uniqlo, was tasked with designing the hotel staff uniform.

While luxury travellers can have their pick of new hotels, including Hyatt House and Alila Bangsar, those who wish to experience the buzz of the city’s KLCC central business district can choose from these urban properties.

FOUR SEASONS
The gleaming Four Seasons Hotel houses 209 guest rooms, suites and serviced apartments. On top of the usual hotel facilities and restaurants, it comes with its own luxury shopping mall: Four Seasons Place Kuala Lumpur. The food court in the basement is itself an attraction, rounding up gourmet bites such as oysters and caviar, as well as famous Malaysian hawker fare. 145 Jalan Ampang

BANYAN TREE
Rather than set up camp on one of Malaysia’s many beautiful beaches, Banyan Tree has established its first property in the country in the heart of the central business district. Touted as an urban sanctuary resort, the 55-room hotel offers Banyan Tree’s signature aromatherapy treatments and chromotherapy shower – suites even come with a private relaxation pool.
2 Jalan Conlay

W
W Hotels has finally taken its colourful energy to Malaysia’s capital city with this hotel, its first in the country. While fashion, design and music-driven events and experiences will still be a mainstay, W Kuala Lumpur is positioning itself as a top-tier event space with Mice facilities. Its Great Room is over 1,000 sq m, making it one of the largest ballrooms in the area.
121 Jalan Ampang