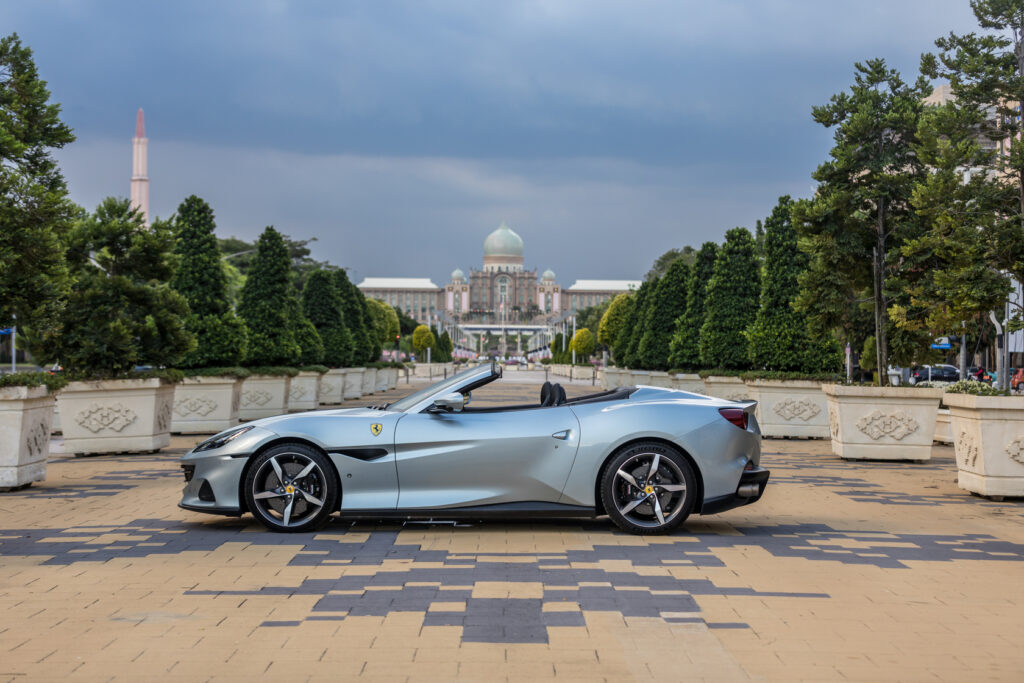 Really now… is there such a thing as a ‘starter Ferrari’?

Well, Ferrari themselves seem to think that it’s fairly new Portofino M – named after the touristic former fishing village on the Italian Riviera – could very well be one…

This direct evolution of the Prancing Horse’s 2+ GT spider launched in 2017, the Ferrari Portofino, was originally unveiled in September last year at the height of the ongoing pandemic, via an online reveal, which was an unprecedented move in the Maranello marque’s 70-year-plus history!

And you know what? The Italian motoring icon definitely has great expectations for its latest hardtop convertible! And even though the Portofino M (‘M’ as in ‘Modificata’ – Modified) is not the least expensive model in Ferrari’s current lineup, it does have an important mission for the Prancing Horse: to bring in first-time customers to the historic brand!

Now, just about a year after its official launch in Italy, the not so brand-new Ferrari Portofino M is finally hitting showrooms here in our neck of the woods, courtesy of Malaysian official importers Naza Italia. And upon laying eyes on it, one will notice that the most obvious styling mods include air intakes on the hood, a new drag-reducing vent on the top of each wheel arch, and aluminium slats along the grille.

The wraparound front bumpers incorporate imposing, sculptural air intakes that lend a decisive, aggressive look to the front of the car. They also feature a new air vent at wheel arch height, added because of the need to reduce the car’s overall drag. It also has a new rear diffuser, which can come in carbon fibre.

Meanwhile, new camshaft profiles and other tuning tweaks to its front-mounted twin-turbo 3.9-litre V-8 means output is now at 612 horsepower, up from the original Portofino’s 591. And as when heritage comes into question, know that the engine actually belongs to the V8 turbo family voted “International Engine of the Year” on four consecutive occasions between 2016 and 2019!

The new car’s exhaust gases also flow through a supposedly louder set of active pipes that do away with the previous car’s rear silencers – the better to compensate for the muffling effect of the new gasoline particulate filter. Then, there’s also a rear-mounted dual-clutch automatic eight-speed transmission instead of seven.

Put all this together, and one gets an outstanding performance car that very effectively distils the essence of the Ferrari myth and pours it into a vessel that many people can comprehend and enjoy! Performance numbers for this hot new number include a 0-100 km/h time of just 3.45 seconds and a 0-200 km/h time of 9.8 seconds, with a top speed rated at 320 km/h.

Of course, everyone will also be glad to know that the braking system has also been given a performance upgrade; it now has more modulable brake pedal pressure and pedal travel has been reduced by 10%, resulting in a quicker, more precise response to braking input! Another performance feature is the more modulable brake pedal pressure which, when combined with a reduction in pedal travel of around 10%, delivers more precise, instantaneous responsiveness to inputs during braking.

The aim of this five-position ‘Manettino’ system, a first on a Prancing Horse GT spider, is to make the Ferrari Portofino M’s handling and grip even more accessible by extending the setting ranges still further with the introduction of the ‘Race’ position. Supported by the introduction of the Ferrari Dynamic Enhancer, that position focuses on maximising driving pleasure.

Finally, for the car’s new exhaust system running out back, a new geometry of the entire exhaust line sees the two rear silencers on the Portofino being omitted in this new car, reducing back pressure in the tailpipes and improving tonality.

Step inside, and any Ferrari fan worth his or her salt will know immediately that the older Portofino’s interior has essentially been carried over to the M. The instrument cluster with dual TFT displays arranged around the analogue rev counter, the 10.25-inch central touchscreen, the central console configuration, it’s all as it was. There’s even an available 7.0-inch touchscreen for the front passenger to fiddle with!

Particularly exciting new features come in the form of a ‘Race’ setting on the Manettino switch, giving the car a fifth drive mode, as well as ventilation and heating for the seats. The biggest inclusion, however, is tucked away from sight – an advanced driver assistance system (ADAS) suite that can now be specified for the car!

With a sticker price of RM998,000 before duties and taxes, purchasing a Ferrari Portofino M from Naza Italia now entitles one to an extended seven-year maintenance programme which covers scheduled maintenance at 20,000km intervals, or once a year, without any mileage restrictions.

Best of all, for absolute peace of mind, when one’s Ferrari Portofino M is due for servicing, know that only specially appointed staff who trained directly at the Ferrari Training Centre in Maranello in Italy, and equipped with all the latest Ferrari diagnostic tools, will be the only souls attending to it!