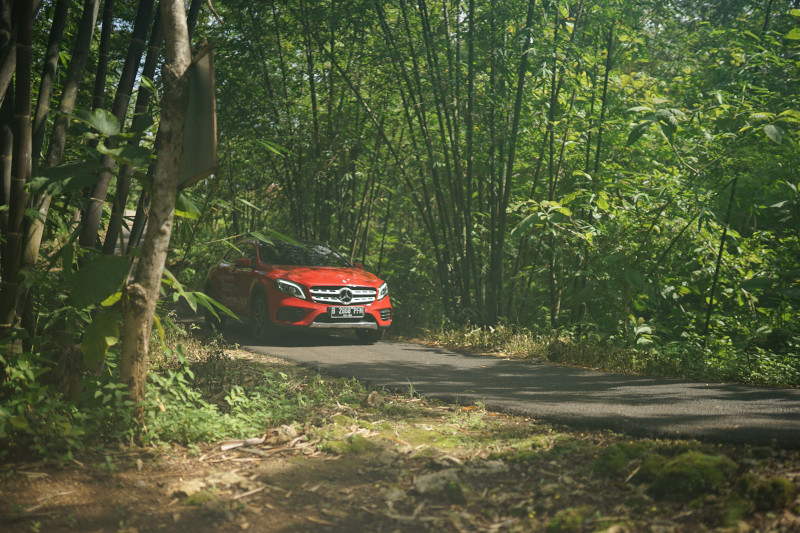 There were waterfalls, caves and sand dunes as Mercedes-Benz went off road in Indonesia to celebrate its G-Class SUVs.
Wednesday, April 17, 2019 By Christy Yoong
Prev1 of 2Next

There are, probably, easier ways to celebrate a 40th anniversary, but Mercedes-Benz’s recent Hungry for Adventure 2019 tour in Indonesia quite perfectly captured the raison d’être behind its highly successful G-Class SUVs. With muddy caves, hidden waterfalls and endless, undulating volcanic sand dunes, all linked through challenging and, occasionally, bemusing roads and trails, the ‘adventure’ certainly tested the cars, which passed with flying colours, and participants, not all of whom, however, successfully unleashed their inner daredevils.

It began with a crack-of-dawn drive to the Kuala Lumpur International Airport 2 for an early flight to Semarang, Indonesia. Situated on Java’s northern coast, Semarang, the capital of Central Java province, is a bustling city of around 1.8 million people. Strategically located in the centre of the northern seaboard of Java, Semarang was a major port during the Dutch colonial era – it became an entrepot for spices from the 17th century onwards – and remains an important regional centre and port. Its position made it a melting pot of Chinese, Indian Arab and European cultures, the influences of which can still be seen in the Chinese quarters and Dutch commercial district. There are a number of Chinese temples here, including Sam Po Kong, or Kedung Batu, built in honour of the great Chinese admiral Zheng He, who visited the area in 1405. Another landmark is the Koepelkerk, or Gereja Blenduk, a copper-domed Dutch church built in 1753.

Regardless which model you’re driving, you can expect a luxurious interior in the G-Class

Our time in Semarang was a brief one. Exiting the General Ahmad Yani International Airport, we were greeted by a range of gleaming Mercedes-Benz SUVs, courtesy of our hosts, Mercedes-Benz Indonesia. We hopped into the GLE 400 AMG Line and, with the guiding sirens of a police escort, headed for our first destination, Balemong Resort in Ungaran, about 30km away. Supremely comfortable, the GLE 400 was no slouch in keeping up with the speeding convoy, its twin turbo V6, with a displacement of 2,996cc, eating up the kilometres with almost disdainful ease. As it roared – elegantly, because MercedesBenz – through the 7G-TRONIC seven-speed transmission, it was more than apparent that there was more in the tank than we managed to put it through. In fact, I sensed a disappointment in the GLE 400 when we arrived, all too soon, at Balemong Resort. It hadn’t yet shown us all it could – a shortcoming it would correct as we got to know each other better through the day.

There is something almost otherworldly about Balemong Resort. Stepping through its doors is like crossing a divide: on the outside, the bustling, unruly world; inside, a serenity that gentles your mind and soothes your heart. Here, a series of 19th-century Javanese buildings are laid out in an enigmatic geometry of tranquillity. Meandering paths through lush greenness leads you to a set of doors, replete with traditional Javanese wood carvings, that open to the swimming pool and the endless vista of Mount Ungaran at the end of the horizon. Here, we find lunch and a respite before the adventure to come.

Our next stop, the Curug Lawe waterfall in Desa Kalisidi in Ungaran, was a mere 10km away but what a thrilling 30-minute drive it was getting there. The road, though tarred, tightened into an undulating trail that rose and dipped with alarming regularity. Here, the GLE 400 displayed its SUV credentials, agile and nimble as it negotiated the trail with far more confidence than its apprehensive driver (me). Its fearlessness proved contagious however, encouraging us to push it ever harder, secure in the knowledge that there wasn’t a mound or dip it couldn’t overcome.

The breathless ride over, we gathered our wits for the 1.5km hike, on foot, to the waterfall. Midway, the elements challenged us with a downpour that only a tropical forest can unleash. The path, never smooth to begin with, turned into a streaming rivulet, making each step a motion of faith and grit. Some abandoned the hike, taking shelter from the rain. Pure will and a certain stubbornness drove me to the end, which opened into the waterfall, a spectacular half-moon of rocks, over which water crashed into a knee-deep receptacle. The pleasure of arriving, however, was tempered by the thought of making my back down those slippery slopes. Soaked to the bone, I had never been so happy to see a car as when I made it back to the GLE 400. Inside, the full-sized SUV was a luxurious proposition that let you put up your feet and, lesson learned, swear you would never do that again.

Our final destination was Yogyakarta and the Plataran Heritage Borobudur Hotel, where we would spend the night. The urban rushhour traffic was a gruelling trial as we raced into the twilight, a stop-start confrontation of traffic squeezed – the car’s proximity alert had a field day! – and eased. Inside the GLE 400, however, we were distanced from the motorway conditions, its comforting cocoon a haven until we arrived, nearly three hours later, at the hotel. Weary and still wet, I had only two thoughts – how hot the shower in my room would be and how will I ever wake up in time to catch the sunrise at Borobudur.