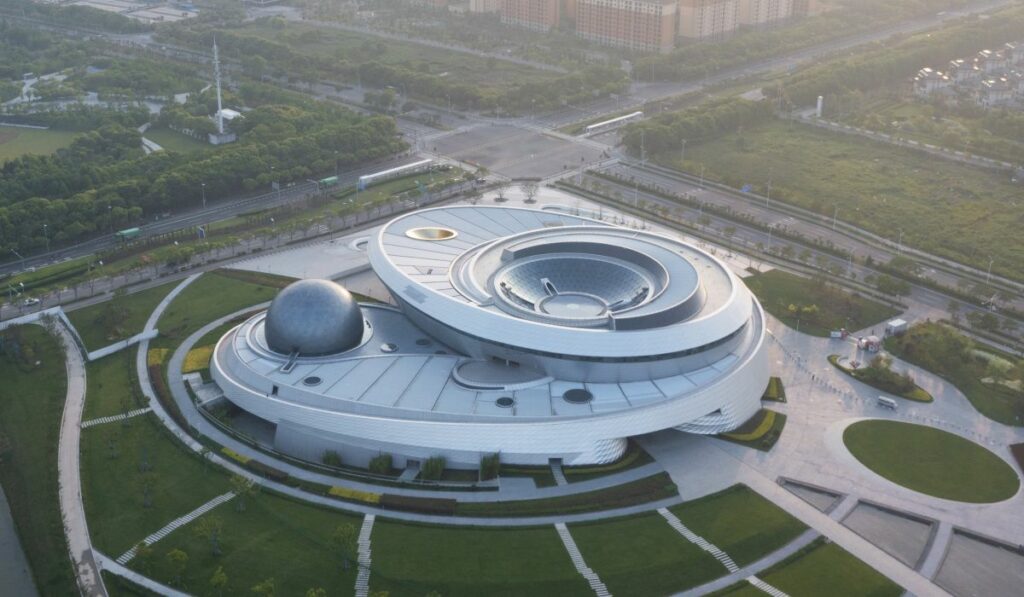 Something as vast and inscrutable as the known universe deserves a place of study that’s just as impressive. Enter the Shanghai Astronomy Museum, the world’s biggest astronomy museum with just over 39,000 sq m of floor space. It’s part tourist attraction and cultural monument, part love letter to humanity’s – and in particular, China’s – undaunting dedication to the exploration of the night sky.

The structure – New York-based architectural firm Ennead Architects received the commission of the museum after winning an international competition in 2014 – sports a curve-centric design language that reflects the celestial bodies up above (while making for a rather pretty building).

Says Thomas Wong, lead designer and partner for the project in a press release: “When designing the Shanghai Astronomy Museum, we wanted to create a physical space that made clear the astronomical truths that make our existence on this planet possible.”

He wants to help guests understand “how truly exceptional the life-supporting aspects of Earth are when compared to the turbulent realities elsewhere in the galaxy.”
The Shanghai Astronomy Museum’s massive acreage will be divvied up amongst exhibition halls, a planetarium, an observatory, an education and research centre and a 24-metre-tall solar telescope.

Programming at the museum will predominantly revolve around educating visitors (reinvigorating the Lingang area of Shanghai with a major cultural attraction) while showing off artefacts and instruments of space exploration. After all, the museum is an offshoot of the Shanghai Science and Technology Museum, so it’s only proper to pay one’s dues to the technological capabilities of China’s burgeoning space programme.

Not to be missed, each of the building’s three main showpieces, dubbed the Oculus, the Sphere and the Inverted Dome. These don’t just act as landmarks for when it’s time to regather the family. The showpieces track vital celestial bodies – namely, the Sun, Moon and stars respectively – in motion.

The Oculus (pictured below), for instance, tracks the relative position of our galaxy’s star vis-à-vis Earth across the seasons. A full-circle tracks across the museum’s entry plaza, finally aligning with a circular platform at noon on the summer solstice (the longest day in the year).

The Oculus at the Shanghai Astronomy Museum. Photo credit: ArchExists

The planetarium theatre is housed within the Sphere, itself emerging as though weightless from its position in the lower museum wing (the Sphere is actually embedded in the roof).

Finally, the central atrium of the building, referred to as the Inverted Dome, provides visitors with an excellent view of the stars in the night sky above. A spiralling ramp beneath the dome leads the eye domewards while providing a path for guests to the various exhibits.

Wong continues: “I hope the Shanghai Astronomy Museum will remind visitors of a shared universal perspective: where we humans sit in relation to the existence of all things both near and impossibly distant.”

This article first appeared in The Peak Singapore.