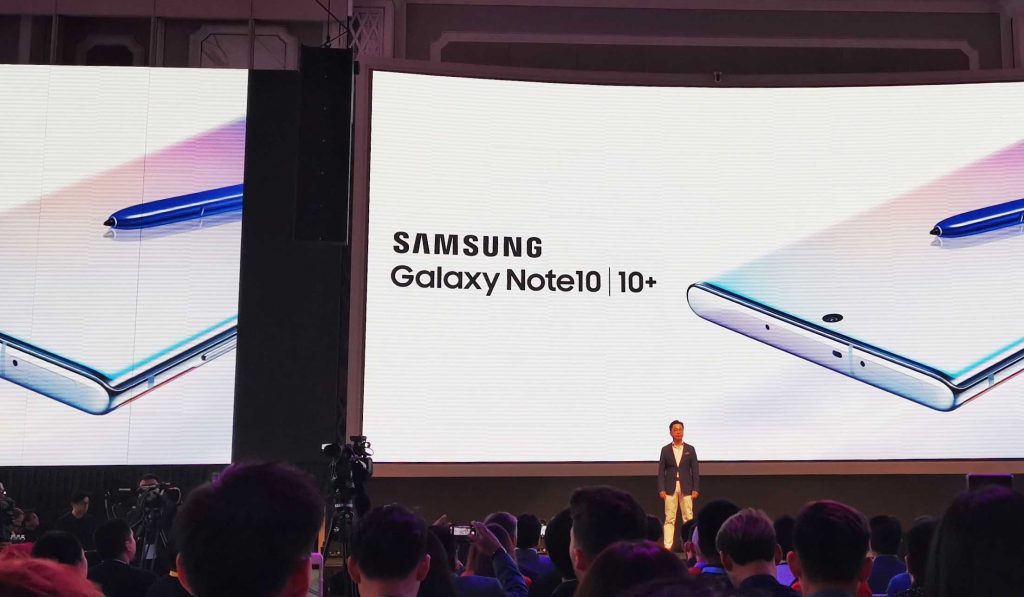 Two is definitely better than one as Samsung’s new pair of Galaxy Note 10 smartphones take Malaysia by storm.
Friday, August 16, 2019 By Jx Chong

Samsung Malaysia Electronics has launched its much-anticipated Galaxy Note 10 smartphones during a glitzy event at St. Regis Hotel Kuala Lumpur that was attended by hundreds of guests.

It certainly was a night to be remembered as Samsung transformed the ballroom into a mesmerising stage with giant monitors lining each side of the hall. In true grandiose fashion, the lights dimmed to reveal Samsung Malaysia Electronics president Yoonsoo Kim taking the stage to welcome the guests and introduced the new Galaxy Note 10 line of smartphones.

According to Kim, the new Galaxy Note 10 lineup was developed with four key tenants in mind: design, creativity, productivity and performance.

Long touted as Samsung’s cutting edge flagship device, the series has come a long way since its debut in 2011 and has cemented itself as the second core pillar of Samsung’s flagship devices. Samsung’s Galaxy Note series has been credited for popularising large displays on smartphones at a time when most companies scoffed at the idea of a large screen device.

This year’s Galaxy Note 10 marks a departure from tradition as Samsung has introduced not one, but two versions with the Note 10+ sporting a massive 6.8-inch display while the Note 10 features a 6.3-inch display.

This year’s Galaxy Note continues the fight against the notch by utilising Samsung’s new Dynamic AMOLED Infinity-O display. As the name suggests, there is a small punch-hole cut out in the centre where the front-facing camera resides, but aside from that, the entire front is covered by the screen.

The evening proceeded with several demonstrations that highlighted the new features of the Galaxy Note 10. This included the use of a new Augmented Reality (AR) Doodle feature that allowed Galaxy Note 10 users to express their artistic side by drawing animated 3D sketches on their device and applying it on to a photo or video of a person.

The feature was most impressive as the camera can actively track the face of a subject allowing the AR 3D elements to reside “on top” of them.

Even more impressive is the Galaxy Note 10’s video capture and editing capability. With the Galaxy Note 10. users can capture pro-grade videos without having to carry around cumbersome heavy cameras.Â  Using Live Focus Video, users can add depth-of-field adjustments that blur out backgrounds and the Zoom-In Mic amplifies the audio in the frame. The new and improved Super Steady stabilises video footage and can even be used to capture steady time-lapse videos.

Samsung has also made improvements to its S Pen stylus which builds on top of the wireless remote control features of its predecessor by adding Air Actions. This allows Galaxy Note 10 users to control certain actions on their smartphone like zooming in or out while using the camera or switching from the rear to front camera by performing a gesture with the S Pen in hand.

Apart, from the new ways to express your creative side, the Galaxy Note 10 also expands upon its DeX desktop mode that enables users to work between their phone or with their PC or Mac. With a compatible USB connection, users can drag and drop files between devices and even use their favourite mobile apps with a mouse and keyboard. All of this is done while keeping one’s data secure through Samsung’s Knox enterprise mobile security solution.

All pre-order units of the Galaxy Note 10 have been sold out so eager Galaxy Note fans will have to wait until 23 August, when the phone officially goes on sale, to purchase it from Samsung’s participating partners.