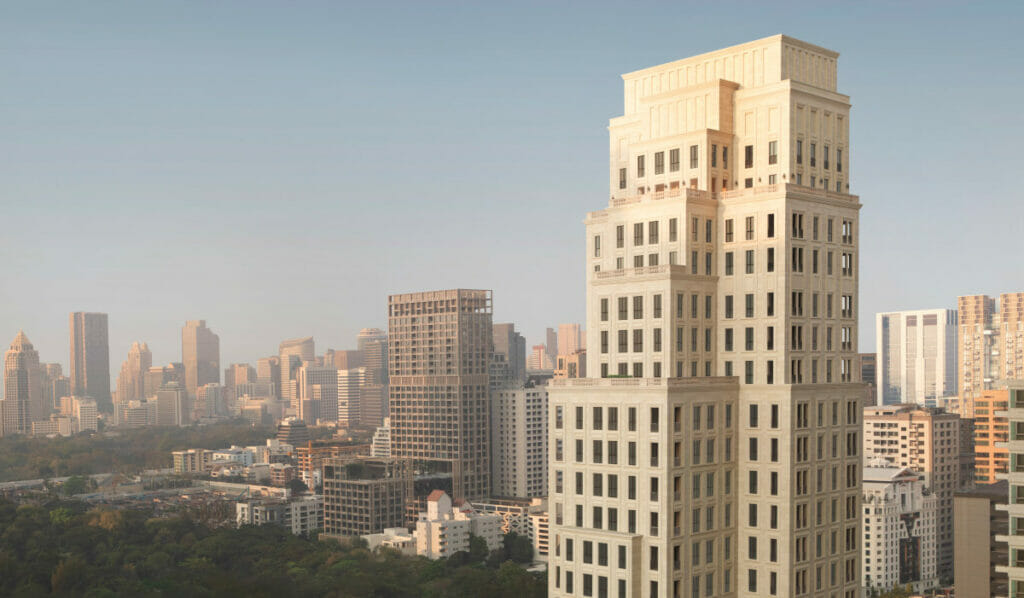 The city views from a penthouse apartment are unbeatable, the views from these residential properties in South-east Asia are the best money can buy.
Monday, May 27, 2019 By Neda Al-Asedi

On Wireless Road, one of Bangkokâ€™s most prestigious locations, stands the impressive off-white, high-rise residential building of 98 Wireless. Owned and developed by Sansiri, Thailandâ€™s biggest development company, 98 Wireless is the companyâ€™s latest flagship property since its first Baan Kai Muk development in Hua Hin over 30 years ago. Itâ€™s not hard to see why itâ€™s labelled as a flagship development, as buying a unit in 98 Wireless is more than just buying a living space; itâ€™s buying into a whole lifestyle.

Resident facilities at 98 Wireless includes the State Lounge, which residents can use for business meetings or as a workspace; the Wittayu Tea Room, a private area to enjoy a calm afternoon tea or host a few guests; as well as the Ploenjit Spa, fully equipped with massage beds and Jacuzzi so residents can wash off the stresses of the day right in the comfort of their own building. Being a resident at 98 Wireless also gives you the benefit of a chauffeured limousine service, where dedicated drivers are available to take you to your destination in a spacious Bentley, as well as access to the Quintessentially concierge service, the global luxury lifestyle service that helps you with anything and everything.

The building is styled in Ralph Lauren Home and is fully equipped with some of the best brands in homeware, including Gaggenau and Kallista. 98 Wirelessâ€™ impressive Beaux-Arts building houses 77 units in total, and all that luxury and top-notch service is still available at a cool starting price of THB125 million, or approximately USD3.9 million for a per square metre price of around USD17,000.

The Keraton at the Plaza Residences is a luxury apartment complex that sits atop the Plaza Indonesia shopping centre, located right in the centre of Jakartaâ€™s luxury district. Its prime location is really what pushes the prices of the Keraton residences units up, as it sits on Bundaran Hotel Indonesia road, which is as central a location as you can get in Jakarta. Plus, Plaza Indonesia and Keraton at the Plaza is opposite Hotel Indonesia itself, largely considered Jakartaâ€™s number one address.

The complex fills up the top floors of the Keraton at the Plaza hotel. The residence complex houses a total of 54 units with a price tag that ranged from two to three million US dollars for units between 400 and 500 sq m, making the price per square metre upwards of USD5,000 in 2012. Unlike some of the other residential lots on this list, the Keraton units are sold completely unfurnished to allow owners the freedom to decorate their space in their own style, a strategy that proved sound as most of the units sold out. More recent estimates show that units in the Keraton can fetch upwards of USD12,000 per square metre.

For its prime location and a birdâ€™s eye view of Central Jakarta, plus residential facilities that include a spa and private lounge bars, the apartments in Keraton at the Plaza are some of the best residential lots for those looking to live in this bustling city. Keraton is Javanese for palace and, as the name suggests, staying here will be like staying in your own high-rise castle.

The city of Makati in Metro Manila is the financial district of the Philippines, which explains why properties in Makati fetch some of the highest prices in all of Manila. In 2019, the new Two Roxas Triangle is set to take the top spot of most expensive property in the area.

With spacious units and low-density floors, Two Roxas Triangle gives residents the most important luxury, space and privacy. Combined with the shared amenities that include a helipad and retail services located in the building, residents will have all they need right at home. The three- and four-bedroom units in the property ranges from 302 to 493 sq m in size, with a minimum selling price of PHP82.3 million (around USD1.6 million). But if youâ€™re really looking to live the high life and enjoy the views of Manilaâ€™s bustling financial district, the higher floor penthouse apartments will set you back about PHP193 million, or around USD3.8 million.

Of course, in a list of the most luxurious properties in South-East Asia, one cannot miss out on Singapore. The island-nation is the most expensive housing market in the region, and is on the top of the list in global markets too. But in a country full of high-end high-rise apartment buildings, one development in particular takes the number one spot after the sale of the top floor penthouse unit for more than SGD60 million back in 2017, which is Sculptura Ardmore.

Located in Ardmore Park, one of Singaporeâ€™s prime locations just a short walk from Orchard Road, Sculptura Ardmore is exactly what its name suggests, a sculpture of breathtaking modernist design that rises up into Singaporeâ€™s skyline. Designed by renowned architect Carlos Zapata, Sculptura Ardmore is an SC Global project, known for owning and developing some of Singaporeâ€™s most iconic buildings. A testament to the masterpiece that it is, the Sculptura took more than 12 years to complete, with a curved facade and pools that extend out of the building that gives it an illusion of motion. At the same time, the glass fins that surround the building on the outside create actual motion, as residents can control the angle of the glass panels to shade their units from the tropical sun.

Sculptura Ardmore houses 34 four bedroom units that range from smaller units at 280 sq m to penthouse units of 957 sq m, and shared facilities that include a 30m swimming pool, Jacuzzi and clubhouse. At the price of SGD60 million for the penthouse sold in 2017, the Sculptura Ardmore raked in almost SGD63,000 per sq m, or about USD46,220, while the smaller 280 sq m commanded a square metre price of around USD33,000. For the exclusive location and the luxury of staying in a sculptural and architectural masterpiece, it might prove a steal.

Vietnam has been making waves in real estate news recently for its booming potential in the luxury real estate front, especially with the countryâ€™s economy seeing high positive growth in 2018. Since early last year, new luxury developments have been popping up all over Hanoi and Ho Chi Minh City, making Vietnam a location to keep an eye on for those interested in investing in a new luxury condominium or apartment.

And of these developments, the Serenity Sky Villas development under SonKim Land in Ho Chi Minh City stands out. Announced back in 2016 and scheduled for handover in 2019, Serenity Sky Villas aims to create a tropical villa retreat in the middle of the city. Each unit comes with its own private garden and swimming pool, so residents can take refuge through a dip in the water or lounge in a lush garden any time, even in the busy metropolitan that is Ho Chi Minh City.

With 45 units housed in the building and five unit types, thereâ€™s something for everyone whether youâ€™re looking for a luxurious and spacious bachelorâ€™s pad or aiming to settle into the penthouse right at the top, especially for those who value their privacy. Connectivity and a central location also make this 17-storey residential building appealing to those aiming to move into Vietnamâ€™s growing luxury real estate market. The 497 sq m penthouse currently holds a selling price of VND75.5 billion, or around USD3.2 million.