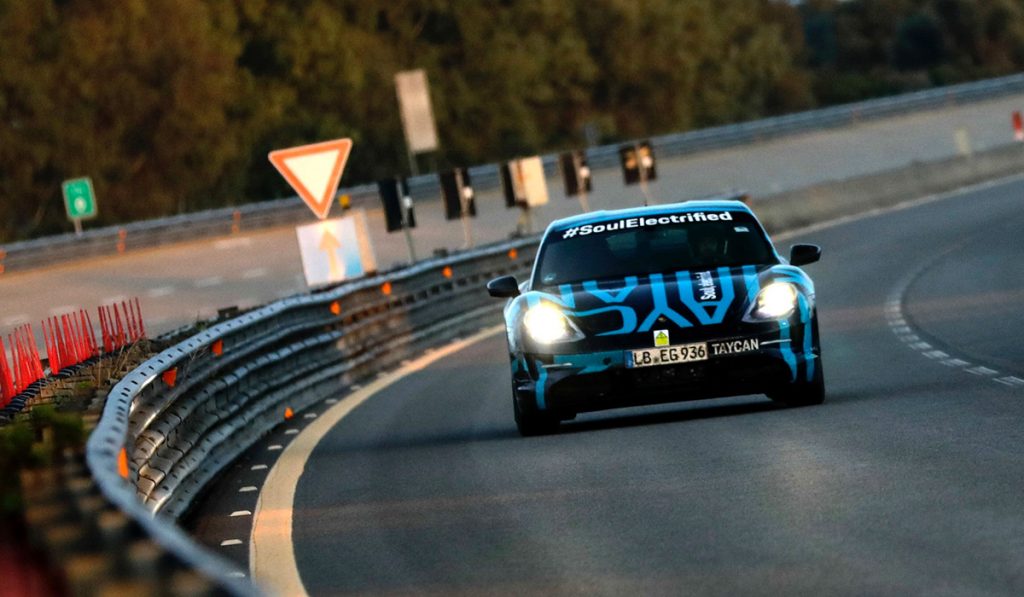 In the sizzling heat of southern Italy, Porsche’s pre-production Taycan shows that it can go the distance.
Monday, August 26, 2019 By Jx Chong

In sizzling summer heat on the NardÃ² high-speed track in Italy, Porsche successfully put its first all-electric vehicle, the Taycan through a gruelling endurance test. The result showed that in 24 hours, the pre-production Taycan was able to cover a distance of 3,425km which is approximately the distance from NardÃ² to Trondheim in Norway.

The Taycan boasts a full range of technical innovations that include two powerful electric motors mounted in the front and rear axles called permanently excited synchronous motors (PSM) that allow them to deliver the high performance typical of Porsche.

Its electric powertrain is designed in such a way that it can unleash its full power even after accelerating several times at short intervals. At the end of July a pre-series vehicle accelerated from 0 to 200 km/h no less than 26 successive times at an airfield. The average acceleration figure from the timed runs was under 10 seconds. The difference between the fastest and slowest acceleration run was 0.8 seconds.

Much of this impressive result can be attributed to the Taycan’s system voltage of 800 volts, rather than the regular 400 volts found in most electric cars. The technology helped the 919 Hybrid win the 24 Hours of Le Mans three times in a row. The 800-volt technology enables consistently high performance, reduces the charging time and decreases the weight and the packaging space of the cabling.

With peak temperatures of 42 degrees Celsius and a track temperature of up to 54 degrees Celsius, the Taycan proved its long-distance qualities. This was thanks to the Taycanâ€™s sophisticated thermal management that revolves around a highly efficient, intelligent system for cooling and heating the high-voltage components. This prevents potential power losses due to excessive heat generation and ensures that the optimum temperature for the most efficient charging process has been reached when the vehicle arrives at a charging station.

The Taycan has a top speed of over 250Â km/h. It accelerates from 0â€“100 km/h in significantly less than 3.5 seconds and its lithium-ion battery has a gross capacity of around 90 kWh. The Taycan will be presented in September and launched onto the market at the end of the year.