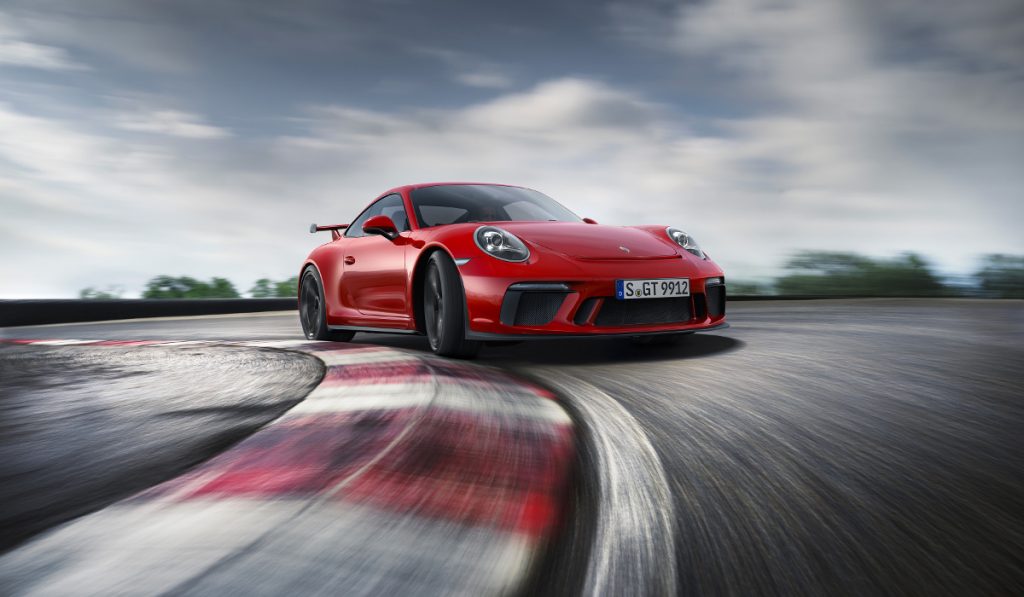 In this day and age, it has become quite common to hear about sportscars that are built for both the racetrack and the road; the perfect juxtaposition of speed and comfort. But where most of these vehicles are mostly road cars that have been given various upgrades to behave a little more like racing cars, the new Porsche 911 GT3 was built the other way around â€“ taking a race car and taming it, ever so slightly, to make it legal to drive on the streets.

The focus when building the 911 GT3 definitely revolved around crafting a very pure driving experience. There are no nasty turbos here (something that irked a lot of the classic Porsche fans) just a naturally aspirated four-litre, flat six cylinder engine that boasts 500hp and is capable of 460 Nm of torque. In fact, this engine is virtually a carbon copy of the beast found in the thoroughbred 911 GT3 Cup racing car. And, seeing as how the engine was built to rev up to 9,000rpm, weâ€™re betting it is going to sound a lot like the cup car as well.

The standard transmission on the GT3 is the seven speed PDK transmission from Porsche but for the purists, thereâ€™s also an option for a 6-speed manual gearbox which will make any drive that much more memorable.

The fact that the Porsche 911 GT3 was designed to be comfortable everyday driver is quite apparent in the interior of the vehicle. Luxurious leather seats and upholstery adds to the opulence of the car while the Porsche Active Suspension Management (PASM) shock-absorber system can deliver a smooth enough ride on a casual day and still immediately change its stance when you want to drive a little more aggressively.

Donâ€™t let all the bells and whistles inside the 911 GT3 fool you because the car was designed to be a wolf in sheepâ€™s clothing. Whatâ€™s undiscernible from a simple glance is the fact that the carbon rear wing â€“ an icon of Porscheâ€™s sportscars â€“ is 20mm higher in the airflow than previous models because it needs to generate that much more downforce; and to further improve its handling, the car was also designed with rear axle steering. At the end of the day, what may look like a run-of-the-mill Porsche, is actually capable of doing 0-100km/h in 3.4 seconds with a top speed of 318 km/h. Like we said, a wolf in sheepâ€™s clothing.