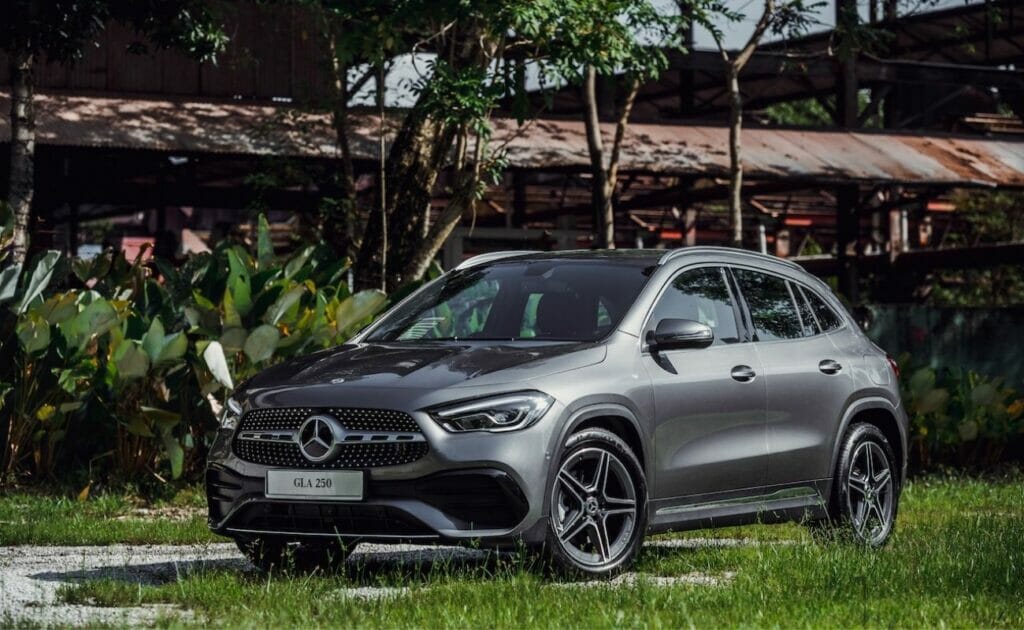 Among quite a number of Mercedes-Benz aficionados out there, perhaps the biggest complaint about the Stuttgart’s automaker’s first-generation GLA crossover from 2015 was that it wasn’t practical enough. But thankfully, the all-new, second-generation 2021 Mercedes-Benz GLA addresses its predecessor’s shortcomings quite effectively.

To begin with, the size seems just about right this time around. Both the Mercedes-Benz GLA 200 and its 250 stable-mate are 14mm shorter than the earlier generation car they replace, while the wheelbase has grown by 30mm, adding an extra 114mm of rear legroom and a 435-litre boot that is 14 litres bigger.

So now, even as an entry-level SUV model, the new GLA is perhaps much more deserving of the Mercedes-Benz badge than before. In any case, the new GLA is a solid pick for an extra-small luxury SUV and compares well against competitors like the Audi Q3 and BMW X1.

At the front, you’ll also find a more imposing face, consisting of a larger grille and shapely LED headlights. Both models come with a similar front bumper design with a fake full-width air intake and a functional centre inlet underneath, although the GLA 200 also comes with a chrome skid plate. The GLA 250 gets a slightly more aggressive jutting front spoiler, gloss black trim and a trapezoidal grille with chrome pins. As for the wheels, the GLA 200 comes with 18-inch split-spoke silver alloys, whereas the GLA 250 rolls on larger 19-inch two-tone items.

The new GLA 200 comes with a more imposing face, consisting of a larger grille and shapely LED headlights

Out back, the two-piece trapezoidal LED taillights are slimmer than before and come with rectangular light guides, and while both models feature twin integrated tailpipes, the GLA 250 has extra fake vents and a sportier diffuser-like bumper insert. Meanwhile, Mercedes-Benz has also reduced the number of character lines along the sides, added an extra rear side window and stretched the doors downwards for a clean, more aerodynamic look.

Step inside and one will discover power-adjustable front seats with memory. There’s a lot more headroom than before too, and that’s transformational for both driver and front passenger. You sit higher, with a better view through the taller and less severely raked windscreen… just like how you should be in an SUV. The cabin is upholstered in Artico faux leather in the case of the 200. The 250, meanwhile, adds a flat-bottomed steering wheel, Artico and Dinamica microfibre seats, alongside brushed aluminium trim, paddle shifters and AMG illuminated treadplates. In the back, 40:20:40 split-folding rear bench is standard affair for both models.

Overall, the cabin is significantly improved over the previous GLA, both in its materials quality and space. And as with its other siblings, the new GLA also showcases the Mercedes-Benz User Experience (MBUX) with twin 10.25-inch instrument and infotainment displays and the’“Hey Mercedes’ voice control system. Other standard equipment includes keyless entry, push-button start, parking assist, a reverse camera and a hands-free powered tailgate, with the GLA 250 throwing in 64-colour ambient lighting as well. As for safety, all cars come with autonomous emergency braking, door opening warning and Pre-Safe, although only the 250 is fitted with blind spot monitoring.

The GLA 200 is powered by a Renault-sourced M282 1.3-litre turbocharged petrol four-cylinder, offering 163PS at 5,500rpm and 250Nm of torque. Coupled with the Getrag seven-speed dual-clutch transmission, it’s enough to propel the car from zero to 100km/h in just 8.7 seconds, on its way to a top speed of 210km/h.

Finally, both models also come with a four-link independent rear suspension setup, while passive dampers still equip both models as standard. But perhaps in-line with its higher performance figures, the GLA 250 gets a slightly lowered ride height compared to the GLA 200.

And since the government has agreed to continue giving a 50% discount on full-imported completely-built-up (CBU) cars, those shopping for a (fairly) bite-sized luxe crossover will still get to pick up the GLA 200 Progressive Line at RM244,200 on-the-road without insurance, while the GLA 250 AMG Line is set to drive home with you for RM285,337.