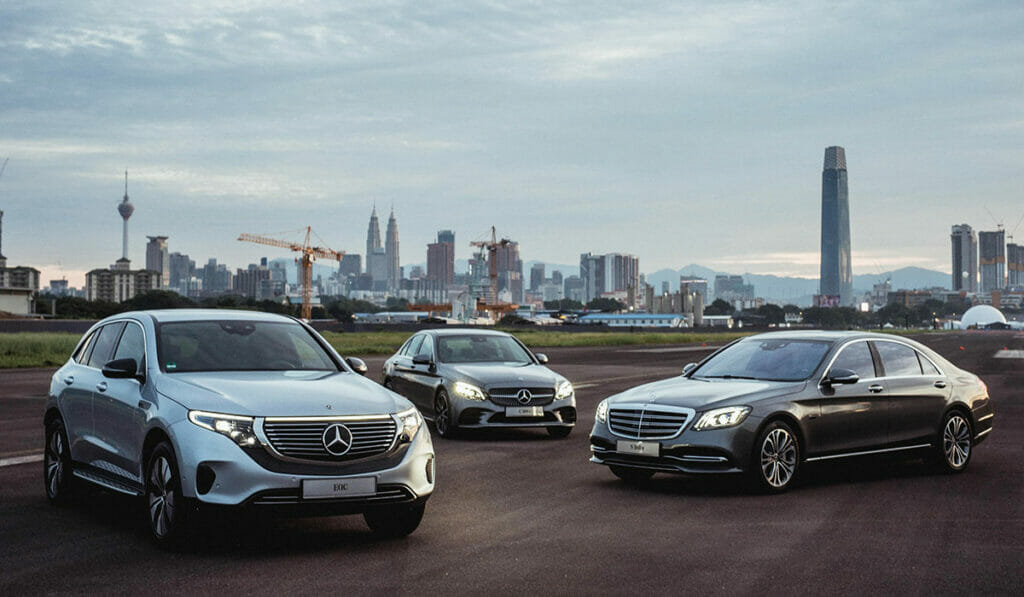 Mercedes-Benz’s EQ is on Track To Electrify The Wheel.
Tuesday, October 22, 2019 By Ellfian Rahim

On 29 January 1886, Carl Benz applied for a patent for his ‘vehicle powered by a gas engine.’ The patent – number 37435 – may be regarded as the birth certificate of the automobile. Now, some 133 years later, the spirit of innovation flows just as strongly at the house of the three-pronged star!

The company has reinvented the automotive industry with its EQ brand, pioneering the direction for future mobility and setting the stage with its Concept EQ range of electric vehicles. Incidentally, the ‘EQ’ moniker is derived from the Mercedes-Benz brand values of emotion and intelligence, and represents the brand’s drive towards intelligent electric mobility.

Mercedes-Benz Malaysia recently rolled out the first-ever all-electric vehicle under the EQ brand, the EQC 400 4MATIC, along with its first ever plug-in S-Class, the S 560 e limousine. Completing this new and highly-anticipated range of electric power-assisted cars is the latest C 300 e.

The space-age interior of the EQC 400 4MATIC.

The EQC appears fairly similar to a conventional Mercedes-Benz GLC SUV, with a streamlined profile and soft, organic forms. Even though this is an electric vehicle, the EQC still features a traditional Mercedes radiator grille, with a dinner plate-sized three-pointed star surrounded by a glossy black panel that flows into the Multibeam LED headlights to form a U-shaped graphic.

(Related: Mercedes-Benz’s Mark Raine Speaks on How He has Taken The Luxury Car Maker Forward in Malaysia)

Inside, EQC comes with the Mercedes-Benz User Experience (MBUX) infotainment system, featuring twin 10.25in displays. The centre display is a touch-screen and the SUV also features the Linguatronic voice control with the ‘Hey Mercedes’ activation code. The system offers EQ-specific displays and voice commands, plus an optimised navigation system that takes into account the car’s remaining range and available charging stations.

Pedal to the metal, the EQC gets from zero to 100km/h in 5.1 seconds before reaching an electronically limited top speed of 180km/h. Meanwhile, juicing its twin motors is an 80kWh lithium-ion battery that is modular in design, with two modules containing 48 cells each and four with 72 cells apiece, making for a total of 384 cells.

This gives the EQC a combined range of 417km, and the car comes with a 7.4kW watercooled onboard charger that enables it to be charged in 11 hours from a regular AC public charging station, while the Combined Charging System (CCS) socket allows a DC fast charging station to provide a maximum output of 110kW, thus charging the battery from 10 per cent to 80 per cent in just 40 minutes!

The limousine’s hybrid drive system combines a 3.0l turbocharged V6 petrol engine offering 362hp and 500Nm, and an electric motor with a rated output of 121hp and 440Nm. Total system output is rated at 469hp at 5,500 to 6,000rpm and 700Nm. Performance numbers include a top speed of 250km/h and a 0-100km/h time of five seconds. The car’s electric motor is housed together with the torque converter and clutch within the reworked nine-speed 9G-Tronic Plus automatic transmission, and gives the car an all-electric range of around 50km.

Four operating modes for the power train are available, with Hybrid being the default setting. There is also E-Mode, which allows for all-electric driving, E-Save to reserve the power in the charged battery until needed, and Charge, which juices up the battery while driving. As with the S 560 e, the smaller car’s battery provides it with an all-electric range of around 50km.But EQ is more than just a brand for vehicles. It also represents Mercedes-Benz’s electric mobility solution, and this includes Mercedes-Benz charging stations.

As part of the company’s support for the Energy Efficient Vehicles (EEV) initiative in Malaysia, Mercedes-Benz Malaysia has begun setting up a charging station network for the convenience of PHEV and EV owners. Currently, its charging stations are located at selected Mercedes-Benz Autohaus throughout the Klang Valley.