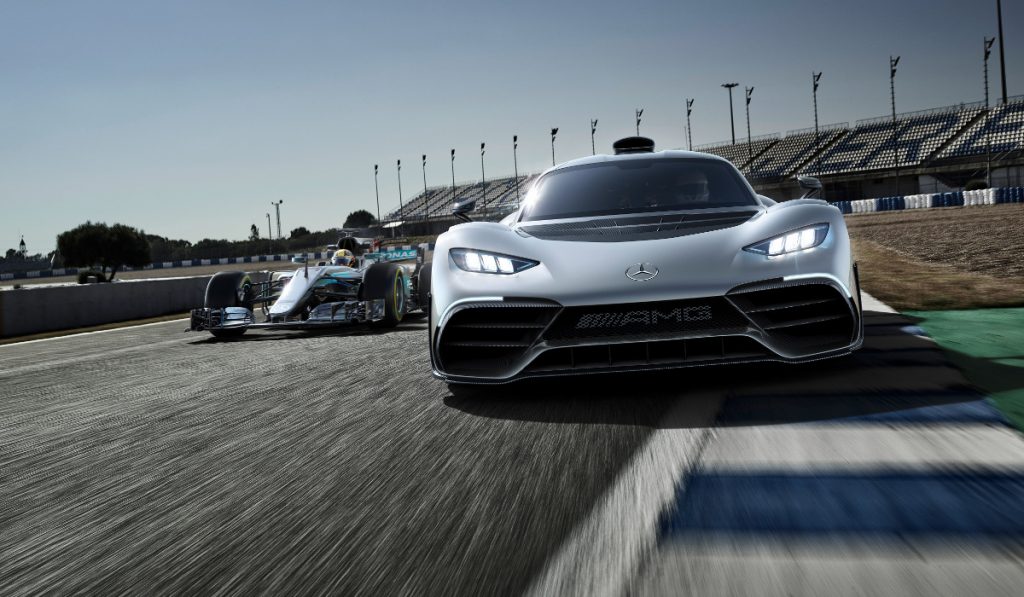 It seems like this year is a big one for Mercedes-AMG. A couple of months ago they celebrated their 50th anniversary with the launch of six new AMG 43 variants in Malaysia and just a few days earlier at the International Motor Show (IAA) in Frankfurt/Main they unveiled this very stunning Mercedes-AMG Project ONE.

With the ONE coming probably from Formula One, the Project ONE is a Mercedes-AMG vehicle that utilises the performance-specific technology developed by the Mercedes-AMG Petronas Motorsport team, to create a hybrid car with outstanding performance both on and off the race track.

Project ONE has more than 1000hp under the hood, goes from 0-200km/h in less than six seconds and has a top speed of more than 350km/h; and the kicker is, the engine is only a 1.6 litre V6. The secret however comes with the engines hybrid characteristic meaning this 1.6 litre petrol engine is turbocharged and works in tandem with four electric motors to realise these insane performance numbers.

Two of these electric motors are on the engine itself â€“ one installed directly on the combustion engine with a link to the crankcase and one integrated into the turbocharger. The other two electric motors are attached to each of the front wheels. This unique setup of course brings an unprecedented level of performance to the Project ONE but also allows the car to control individual acceleration and braking of each front wheel resulting in incredible control. Another great result of this setup is that according to Mercedes-AMG, with the axle motors, 80 percent of the braking energy can also be optimally used for recuperation under everyday driving condition; ultimately, this translates to a much longer electric range.

Although the car is still very much a concept at this stage, the Mercedes-AMG Project ONE allows their engineers to obtain valuable information about hybrid drive technologies so that in the future they can successfully make a model fit for mass production.