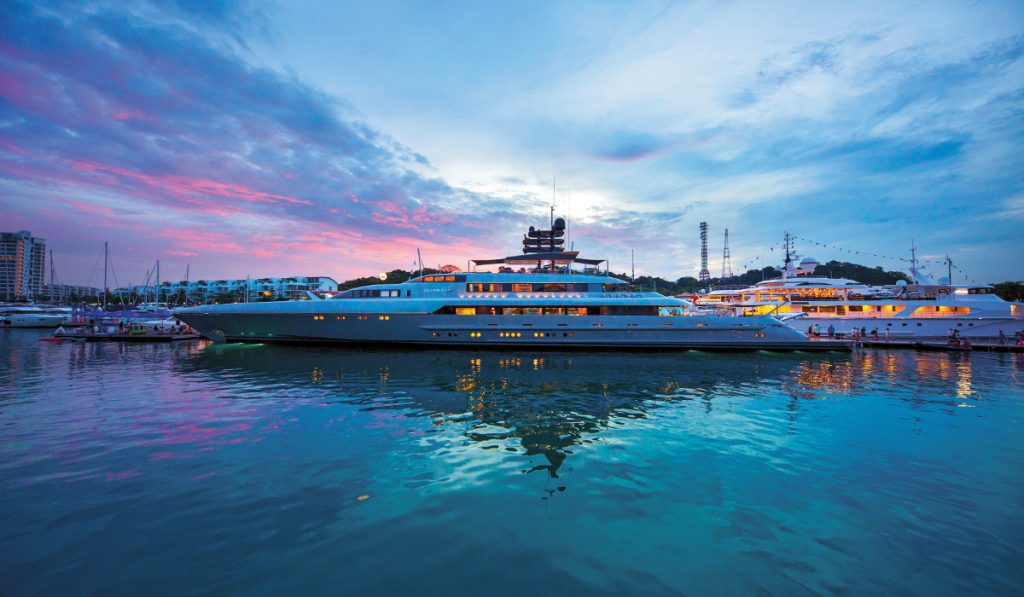 All hands on deck!
Wednesday, September 6, 2017 By Joanna Lee

When faced with the eternal summer that is Singaporean weather, nothing sounds better than the boundless body of water and the feeling of the wind against your face, combing through your hair. Even though I didnâ€™t get to set sail into the open sea, this yearâ€™s Singapore Yacht Show definitely gave a taste of not only the yacht life, but life aboard the worldâ€™s most luxurious superyachtsÂ (link 2).

The city stateâ€™s ONEÂ°15 Marina was filled to the brim with 94 of the latest innovations in luxury superyachts, vessels grand and opulent enough to host a glittering soirÃ©e. Light danced off the metal of each vessel and the decks provided visitors with a complimentary hot-stone foot massage. New yacht toys were on display and ready for play, while supercar parades, fashion shows, pop-up bars and gourmet food stalls complemented the main event and served as respite in-between tours.

One of the highlights came from Echo Yachts, the largest superyacht builder in Western Australia, which debuted its new pride and joy â€“ the 46m composite catamaran shadow vessel named Charley. Claiming to be the largest composite resin infused vessel ever built in Australia, Charley holds spacious interior and exterior accommodation and entertaining areas. Its sizeable carrying capacity allows for a myriad of tenders and water toys of your liking, as well as contributes to the superior sea keeping and fuel efficient performance. The construction and design of Charley took 2Â½ years to flesh out â€“ from inception to handover â€“ resulting in an exemplary standard of finish courtesy of the latest 3D design, five-axis mould cutting and vacuum resin infusion techniques employed by the shipyard.

Luxury lounging on the top deck of Ambrosia.

So it isnâ€™t the food of the gods, but a single look at its lavish interiors and one would think that it was indeed a vessel built for them. Benettiâ€™s 65m Ambrosia is a sight to behold and, undoubtedly, sports one of the most beautiful interiors on show at SYS, one that reflected an almost renaissance-like regal quality. The exterior and interior styling was entrusted into the hands of consultants Stefano Natucci and FranÃ‡ois Zuretti, with the former giving the yacht traditional Benetti lines that reflects Ambrosiaâ€™s high-tech specification.

Measuring a great 77m, the Silver Fast was the largest yacht on display at this yearâ€™s Singapore Yacht Show.

Topping it all off, the 2017 SYS also saw a magnificent silver surfer in the form of an enormous 77m vessel. Designed by Espen Oeino, the Silver Fast is the fourth and most advanced yacht in the highly celebrated Silveryachts series, as well as the worldâ€™s largest and fastest aluminium motor yacht with conventional propulsion. This sleek beast is capable of hair-raising speeds of more than 27 knots, and long-range cruising capability of a maximum of 22 knots. Despite its size, Silver Fast is also ideal for cruising in areas that many large yachts are unable to access, thanks to its 2.6m shallow draft. Though it isnâ€™t the most visually extravagant vessel, it definitely stood out as a sophisticated, and classically styled and furnished superyacht that delivers. Silver Fast was also one of the new milestones that was achieved at the 2017 SYS, being the largest yacht on display, along with a record number of World and Asian premieres.

The show didnâ€™t end at night though â€“ as darkness fell, the superyachts were illuminated by a lit up ONEÂ°15 Marina, ringing in the time for calm waters and dining on the bay.