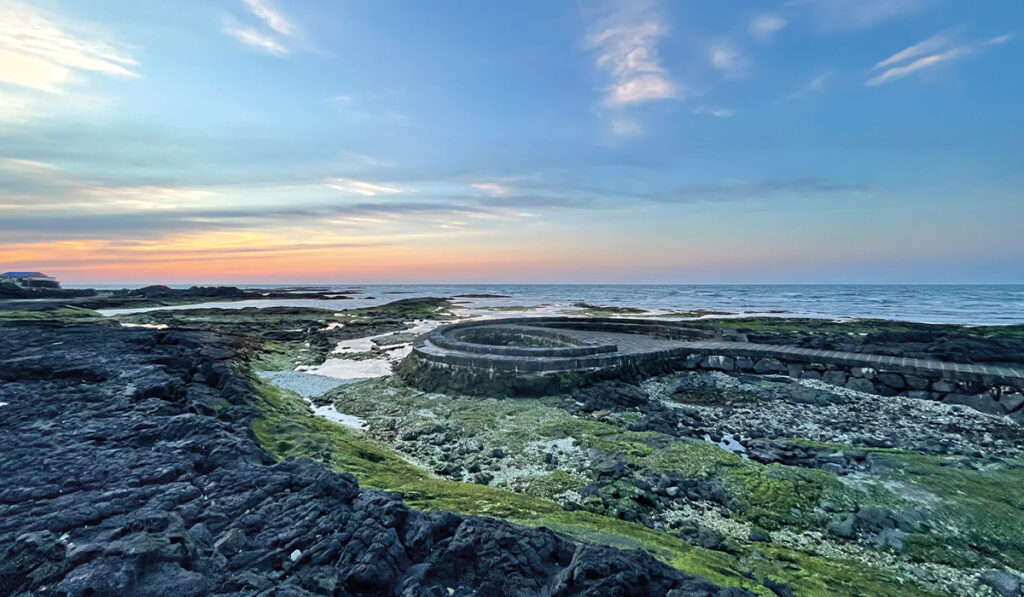 As a foreigner with no grasp of the language, navigating the small cafés and hidden restaurants on the island is no easy feat. This guide is for you.
Sunday, January 16, 2022 By The Peak Malaysia

Every day, almost every five minutes, an airplane takes off from Gimpo International Airport in central Seoul for Jeju. Seoul-to- Jeju, a 450km flight lasting 70 minutes, is the world’s busiest air route. South Korea’s largest island lies south of its mainland and is a major tourist destination for South Koreans. Locals accounted for 13.5 of 15.28 million visitors in 2019. In November last year, the Jeju Tourism Organization reported that 10 million domestic visitors visited Jeju.

Home to breathtakingly beautiful vistas, rugged volcanic formations, fresh seafood, and Hallasan, the country’s tallest mountain at 1,974m, Jeju has many attractions. Its tourist infrastructure is unfriendly to non-Korean speakers, making it difficult for foreign visitors to experience the island beyond the beaten track, especially when it comes to dining.

Being the only self-governing province in the country, it marches to its own beat. Locals don’t care about awards or the Michelin dining guide (if it ever comes to Jeju). Consequently, most tourists cannot find references beyond the tourism board’s recommendations online and the few English blogs that list the same names.

Restaurants in Jeju gain fame through word of mouth. Hence, how might a foodie experience its culture and cuisine if he or she does not read or speak Korean? Through persistence and recommendations from friendly locals.

Another unique culture is haenyeo. The term refers to a community of women divers in Jeju, who harvest seaweed and shellfish such as sea urchins and abalone for a livelihood. Most work well into their 70s and even 80s.

(You may also like: One of the Most Remote Restaurants Takes up Residency at Grand Hyatt Singapore)

A close-up look at Mulhoe.

Park Tae Ho’s late mother was a haenyeo who retired at 80. Having requested a guide who could speak English and show me the best places locals eat at, I found the sprightly 70-year-old driver through Klook, an activity and service booking platform. Growing up in the haenyeo village of Seongsan-ri (next to Seongsan Ilchulbong, a UNESCO World Heritage site), Park is intimately familiar with the island and its seafood.

The first on my list of must-eats? Mulhoe, a robust dish of fresh raw fish served in an icy bath of red pepper soup. Normally, this dish is difficult to find in late November when I visited, as it is a summer dish. Fortunately, Park found a shop called Sambo Sikdang that day that had abalone mulhoe. The Jeju mulhoe, unlike mulhoe on the mainland, is a mollusc-and-fish medley made with uncooked fermented bean paste. With vinegar made from fermented barley and strips of cucumber and chopped green pepper, the soup held a tangy punch, a slightly spicy kick, and a resounding crunch that felt strangely satisfying even on a chilly day.

Next, we had abalones on a hotplate and abalone rice in a stone pot. According to Park, there is only one place for it, even if customers “have to wait for an hour sometimes”. We only had to wait 15 minutes at Myeongjin Jeonbok. I found the service to be brisk, and the abalones cooked deliciously tender.

Black pork is another Jeju product that any self-respecting foodie must try in Jeju, whether it be bundled in handmade noodles (gogi gaksu), boiled and served on a wooden block (dombe gogi), or grilled. My hotel staff recommended I have gogi gaksu at the unassuming 30-year-old Goeul Sikbang owned by 62-year-old Kang Gil Ja. As I ate my noodles, I drank the sweet, light broth made from anchovies and vegetables, and enjoyed the tender slices of boiled black pork. Kang had sold out of her dombe gogi for the day, so I left feeling just a little unsatisfied.

A meal at Jeju Seon The Black.

The restaurant is famous for its barbecue black pork.

As her recommendation proved reliable before, I asked the same staff at Jeju Shinhwa World Marriott Resort to suggest a place for a barbecue black pork dinner. At the in-hotel restaurant Jeju Seon The Black, Teddy Lee, a young surfer dude- type chef from Seoul, cooked a 500g plate of Jeju black pork collar and belly for me teppanyaki-style.

In between waxing lyrical about Jeju’s swells, he told me how to pair grilled Jeju black pork, which is not exported outside of South Korea, with condiments such as fermented anchovy sauce, and crisp greens like perilla, rapeseed leaves and Jeju ferns. The salty accompaniments were the perfect foil to the juicy morsels, which are chewier than regular pork and have a richer flavour.

Despite having over 40 F&B outlets within the four-hotel integrated resort, quality control is high. The next night, I enjoyed another Jeju delicacy: grilled cutlass fish at Jeju Seon, next door to The Black. The flesh is sweet and flakes off easily, making it a memorable morsel. I also had seaweed with sea urchin soup, a Jeju speciality, and found that I prefer eating the echinoid raw.

I stayed at the Grand Hyatt Jeju, which opened in December 2020, in the eastern part of the island where the airport and other iconic sites like Haenyeo Museum and Dongmun Traditional Market are.

As the largest Grand Hyatt in the Asia- Pacific region, it has 14 eateries to choose from, including Noknamu, a Korean restaurant where I finally had my dombe gogi. It was served as a side to a hearty breakfast of abalone porridge made with Korean short-grain rice.

Having eaten Korean food for several days, I enjoyed an early dinner at the Steak House on the 38th floor, where I ate a starter of Jeju scallops and viewed the East Sea. The mains include hanwoo, beef from an old Korean breed of cattle raised in small herds on the mainland, and prized for its deep flavour and high marbling.

For non-Korean cuisine, Granada, a tapas bar 10 minutes away from the hotel, warrants a mention. Jung Min-jae opened the restaurant after being inspired during a trip to the Spanish city of the same name. Granada enjoys a faithful following of customers who love the Gambas al Ajillo and the octopus salad with Jeju strawberries and potatoes.

In recent years, Jeju has become a magnet for frazzled Seoulites who view the island as a place to reboot while running a business. Restaurants and hipster cafes with Instagrammable interiors and unexceptional brews (and snacks) have sprung up as a result. But if you look hard enough, you’ll find a few gems.

Last Spring JEJU is renowned for its sustainable cuisine.

BRED IN SEOUL, DESTINED FOR JEJU

There’s also Unidam, a restaurant opened less than two years ago by a former bank trader that specialises in sea urchin dishes and fried tilefish, another Jeju speciality. He plans to open more branches because it is doing so well.

An hour away from the airport, you’ll find Last Spring JEJU restaurant with prime views of Cheonggulmul (a spring by the sea). The 28-seater fills up quickly with hungry patrons who come for chef Kang Byung-wook’s sustainable cuisine. In all aspects, the establishment seems to have all the makings of a San Pellegrino’s Best 50 Restaurant entrant. But Kang, who hails from Seoul, has other priorities.

Following a career that included working at Hong Kong’s three Michelin- starred L’Atelier de Joel Robuchon, Kang is now on a mission to promote indigenous Jeju produce and recipes in danger of extinction. He creates dishes that feature local farmers’ produce. A popular dish served by Kang is noodle soup with white beans and sea trumpet, bathed in stock of black pork jamon, carrot and perilla oil, and black sesame sauce, and served with cucumber and red leaf herb.

Another Seoulite who’s made his home on Jeju is 57-year-old Lee Dong Ho, the owner of Marado Hoetjip, a restaurant that specialises in sliced raw fish, Korean- style. It has now been 20 years since he has lived in Jeju. He began by living on Marado Island, 6 km off Jeju, for 10 years before moving to Jeju to run Marado for 13 years. The former tutor taught himself how to slice raw fish, and adapted his mother’s recipes to serve customers.

Today, Marado is so popular that one has to wait over 45 minutes during dinner if you don’t have a reservation. Fortunately, I booked a place through Klook after my pleasant first experience. I knew I was onto a good thing when I walked into the cosy restaurant on a Friday evening to find that it was already packed to the gills with locals who looked like they had just knocked off work. My reservation with Klook entitled me to a platter of fresh cuts of yellow sea bream, pacific mackerel and yellowtail. Clean-tasting and crisp with freshness, every slice paired beautifully with different condiments that range from sesame oil to silvers of raw garlic.

The culinary attractions of Jeju are indeed diverse. On my last day in Jeju, I visited Chuidasan Resort, which was opened by Seoul architect Anh Ilso in 2018. His daughter Shunya teaches tea appreciation and meditation workshops. She brewed me a cuppa from green tea leaves harvested near a forest in Jeju. As I savoured the fragrant tea, I was amazed at how the taste changed with every sip, much like how every day of my trip revealed something new each time. I understood why locals return to Jeju again and again. The island offers much to discover and taste.

MOST OF THESE SMALL EATERIES DON’T HAVE AN ONLINE PRESENCE, SO REACH OUT TO THEM VIA PHONE: