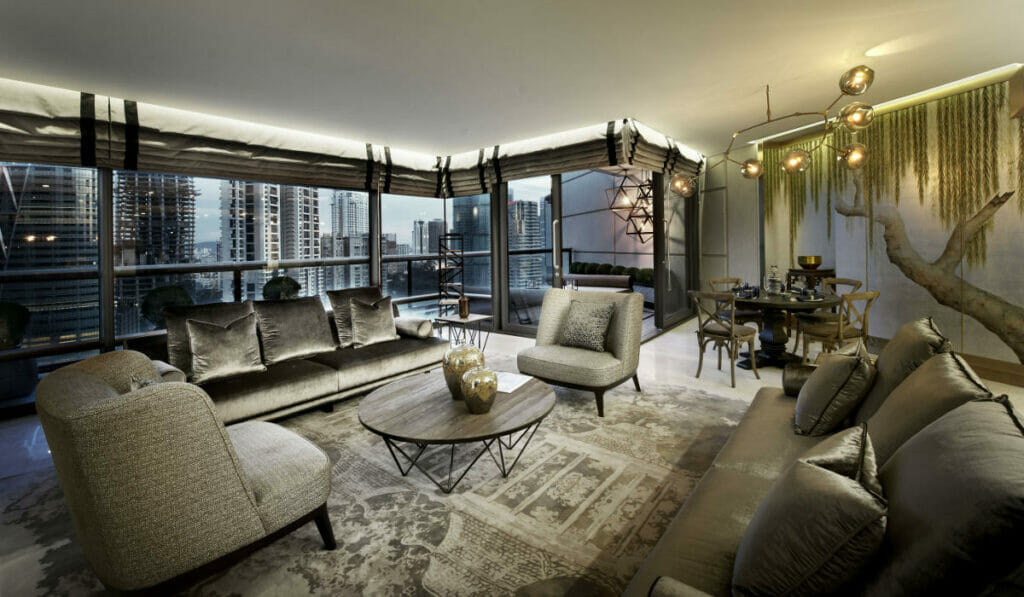 Omar Khan’s journey into the world of designing opulent rugs began in New York where he had been accepted into the prestigious Parsons School of Design. “My parents initially wanted me to become a doctor, lawyer or accountant. But when I found out I had been accepted to Parsons, I decided to tell them that it was a law school. Since this was before the Internet we have today, I managed to get away with it for the first three years before finally telling them the truth. But I don’t regret it because my time at Parsons thought me how to become both a businessman as well as an artist.”

After New York, Khan moved to Jakarta, where he found himself exposed to not only great people, but also how they ran their businesses. “Afterwards, I moved to Hong Kong to work in fashion, window displays and store presentation. This imbued me with a strong discipline on how much work goes into the creation a brand, which includes dealing with multi-labels, asking brands for support, presenting ideas, marketing and so forth.”

Moving back to Malaysia, Khan decided to start his own interior design discipline. Little did he know then that this venture would lead to a sudden epiphany: “When I was doing these projects, I realised that I could never find the right rug. The only available options were either from IKEA or a Persian rug shop. People want opulence but nobody really had the budget or time to wait for the right designs, which is usually six months, mainly because it’s such a laborious process that involves the rugs being hand-knotted by artisans in Nepal.

“At Omar Khan Rugs, we create hand-tufted rugs, which allow us to reduce the waiting time. We also use handheld sewing machines, which is tricky since you have to change the gun whenever you change the colour… and I have a lot of colour changes. But the people we hire to create these rugs are incredible. They have also told me that whenever they complete a design, they feel very proud of their accomplishments.”

Omar Khan rugs can be found in residential developments and commercial projects worldwide. The one shown here was spotted at The Troika.

During the first year of business, Khan focused all his efforts on making introductions while proving that any promises made could be fulfilled. “The first year was a learning curve, so there was a lot of trial and error. By the second year, we focused on servicing and maintaining the relationships we had made. It was only by the third year that we finally hit our stride by linking up with the best partnerships, which was amazing since it was in an industry that nobody else seems to be really doing at this level or in this region, for that matter. A good example of this is our partnership with the House of Tai Ping. This is something we’re especially proud of because, instead of being competitors, we managed to find a way to work together.”

According to Khan, most of his clients came to know about Omar Khan Rugs either through Instagram, the official website (omarkhanrugs.com) or word of mouth. “In Malaysia, we run like an atelier by offering private appointments. Initially, it was the older generation that reached out but, now, the young and affluent have also started wanting these designs for themselves, especially after seeing it online. A good example would be newlyweds moving into their first home and looking for a design that represents their individuality. My favourite tip for potential clients is to visit our website or Instagram so that they can browse the full collection and find something that resonates with them. It’s much easier to start a conversation once you have something in mind.”

As for his biggest highlight so far since starting this journey, Khan points out that he is especially proud of his latest collection comprising 13 rugs in abstract designs. “The reception has been incredible, especially with the Hephaestus and Koko designs. The latter was created as a tribute to the founder of Chanel and her love of the Camellia flower. I really respect what Coco Chanel accomplished during her life time, particularly with the way she combined minimalism with austereness. She really stayed true to her message, which I found to be very inspiring. I usually do very ornate and theatrical pieces, but this latest collection is a bit more abstract. Still, I will always gravitate towards anything that tells a pretty story.”