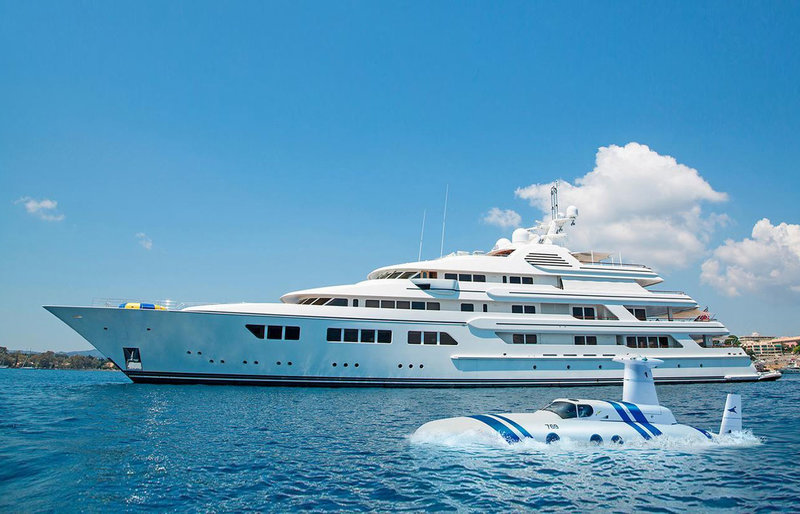 Pretty much everyone has a yacht these days… make yours stand out with its own, private sub!
Tuesday, October 8, 2019 By Ellfian Rahim

So you’ve splurged on that super yacht already but just can’t shake the feeling that something’s still missing in life, eh?

Why not equip that boat of yours with its own mini sub and really impress your sailing party then? Besides, if you want to get really up close and personal with the bottom of the ocean you’re going to need a good personal submarine – especially if you’re keen on exploring exotic depths that just happen to be home to man-eating sharks!

New for 2019, Triton’s latest submersible is lesson in style. Weighing just 3000kg and standing 1.7m tall, the 1000/2 MKII is designed to comfortably fit in a super yacht toy garage. Perfect for exploring coral reefs or sunken ships, this two-person sub can dive down to 305m and power along the seabed at a top speed of four knots for up to 10 hours. Its ideal for those looking to pilot their own submarine and Triton even provides in-house training. Air conditioning and humidity control are an added bonus. This new sub is based on Triton’s class-leading 1000/2 model that was popular both among the super rich and scientific organisations alike.

Dubbed the “ultimate sports submarine”, the HiPer Sub has a need for speed. It can travel at up to six knots and even perform underwater “hydrobatics”. It can roll, loop-the-loop, perform steep turns and vertical ascents and descents. With a racing-red paint job, the HiPer sub can carry a pilot and passenger to a depth of 100m for up to six hours. A fighter jet-style joystick allows for easy manoeuvrability and both occupants can take control without having to switch seats. Weighing 2500kg with a height of 1.46m, it’s perfect for those with room to spare onboard. And, for the first time ever, the HiPer Sub can be transported on a car trailer. This model is also available in a four-person layout.

Announced at the Monaco Yacht Show 2017, Project Neptune is the result of collaboration between submarine specialist Triton and British car marque Aston Martin. This three-person submersible combines all the practical and technical elements of deep-sea exploration with a level of finesse and style that’s quintessentially Aston Martin. Able to dive to 500m, Project Neptune offers a bulbous cabin for panoramic views and a sleek, compact multihull silhouette for optimal speed and style under the waves. While a top speed of five knots might not sound like much – particularly for an Aston Martin – it’s actually four times the acceleration of Triton’s flagship 3300/3 submarine. Inside, a custom interior features hand-stitched leather and carbon-fibre trim.

Created to give guests a completely immersive experience in the watery world below, Seamagine’s Aurora series of submersibles features a massive glass bulb for unparalleled views as she dives up to 1,000m at a max speed of three knots for eight hours. The Californian company’s largest luxury sub, the Aurora-6S, seats five passengers and one pilot. A single-point hoist makes for uncomplicated launching, while an ergonomically designed aft section and telescopic handrails ease boarding. The entire set-up is ideal for deep-sea exploration with the family in tow. The Aurora-6S’s weight and size can be customised to suit the mothership, as can the colour.