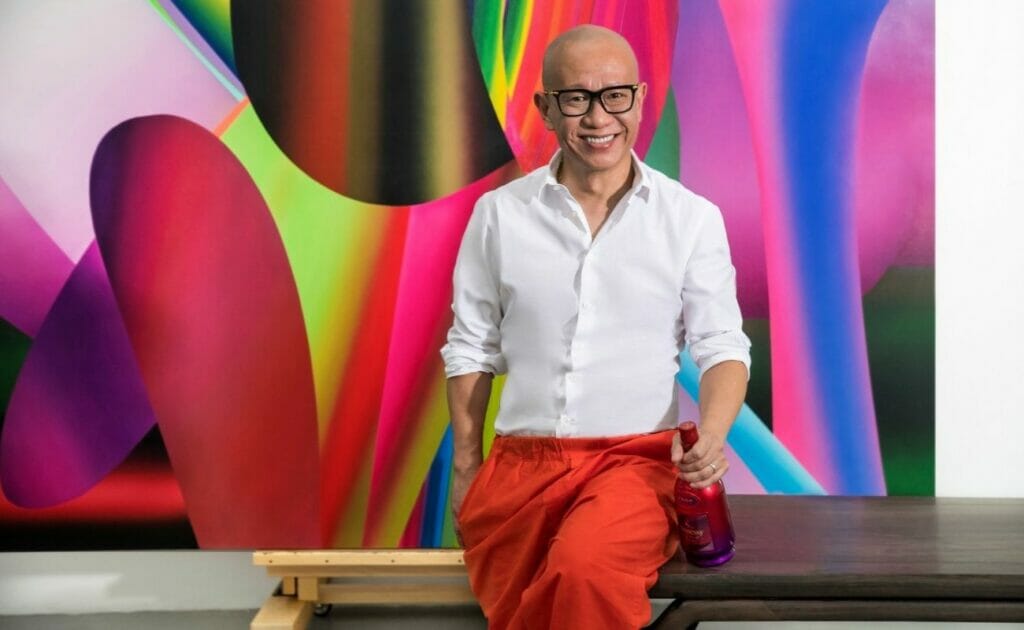 Cognac house presents a unique artistic collaboration to usher in the Lunar Year of the Ox
Friday, February 5, 2021 By Ellfian Rahim

Two of life’s greatest pleasures – fine liquor and beautiful art – have long enjoyed a collaborative relationship, much to the benefit of our own liquor displays. After all, drinkable art definitely does double duty as both curio and, err, cocktail fodder. So, perhaps unsurprisingly, for the upcoming Lunar New Year 2021 celebrations, Hennessy has collaborated with renowned Chinese artist Liu Wei to create a unique celebratory masterpiece.

Born in Beijing, China in 1965, Liu studied printmaking at Beijing’s Central Academy of Fine Arts. After graduating, Liu Wei quickly became a prominent figure in China’s ‘cynical realism’ movement. Influenced by political unrest in China that led to the tragic Tiananmen Square protests in 1989, his early paintings mirror the movement’s disenchantment with both political and artistic utopias.

Demonstrating a wide array of influences – from Chinese calligraphy to Expressionism – Liu’s work has become less political over time, dealing instead with universal themes of humanity.

Now, he has teamed up with Maison Hennessy to create a limited edition of the Hennessy VSOP. Coming on the heels of a particularly challenging time, the Year of the Ox is traditionally associated with openness, talent and confidence. In that same spirit, Maison Hennessy has granted Liu carte blanche to herald an auspicious period that carries the promise of hope, togetherness and bright horizons in creating artwork and designing its special Chinese New Year edition of the Hennessy collection.

Thus, the colourful palette chosen by Liu is inspired by the season of spring, symbolising the infinite choice of possibilities of growth. Just like how the Hennessy Master Blender chooses specific eau-de-vie for a blend, Liu choses the colour palette to express spring’s cheerfulness.

When asked what Chinese New Year means to him, Liu said: “This is the only time when everything comes to a halt; everyone stops what they are doing to enjoy a true break. It’s a moment of freedom.” Inspired by this and in honour of the Year of the Ox, he has created an artwork called Spring for the Hennessy Cognac box, to “express hope… for positive change and a beautiful future.”

And considering the kind of year that we’ve all just been through, there’s probably no other more fitting theme to welcome the coming of a new one!

Featuring organic curves and a colourful palette, Liu’s design is a joyous gift for Hennessy XO Cognac lovers and art enthusiasts alike. A visual echo to the depth of Hennessy cognacs, the painting appears spontaneous and organic; its vibrant shades of fuchsia, blue, green and yellow buoy the spirit. The artist’s choice of medium – like his recurring shapes – is the fruit of reflection and resistance, a gesture of self-expression and a creative metaphor for the many directions one may choose to take in life.

“Maison Hennessy is sort of a culture unto itself. I realised how much time and patience it requires crafting a barrel or perfecting a blend. In a world where so many people work like machines, Maison Hennessy focuses on the excellence of the gesture. We both bring the world’s beauty to life through art: what we create is a contemporary expression of emotion,” continues Liu.

Now, Hennessy hopes to use all the wonderful positivity surrounding this wonderful collaboration to spread the message of joy and optimism by creating a local social movement to spread the cause, in which all its customers are welcome to participate. All they need to do is:

Commenting on the launch of this new movement, Thomas Bouleuc, Managing Director of Moët Hennessy Diageo (MHD) Malaysia, had this to say: “Around the world, the season of spring is highly regarded as one with beautiful colour and natural beauty, much like Liu Wei’s artwork. This, in many ways, illustrates the multi-cultural charm that we celebrate here in Malaysia, including Chinese New Year, which is one of the biggest celebrations locally.”