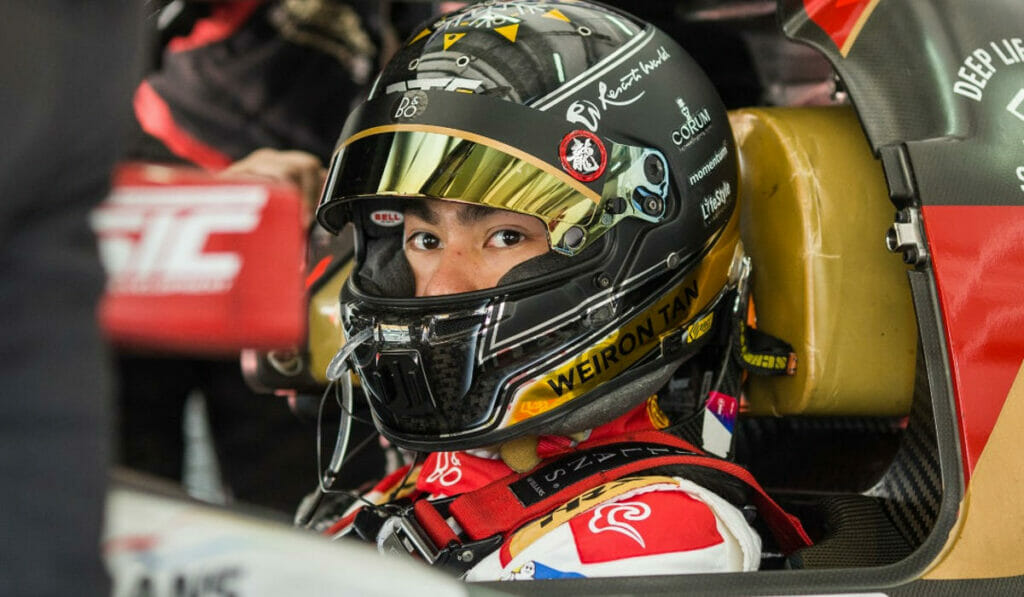 For many of us, Formula One brings with it a nostalgic quality; with 2017 being the final year for F1 on the Sepang International Circuit, I’m sure many wax lyrical about the hey days of the sport. In the early 2000s, Formula One meant families gathered around a television set, watching the coverage of the race, or even making a trip to Sepang to brave the blazing Malaysian heat or weather a sudden storm when the Grand Prix rolls around. This was how a young Weiron Tan got introduced to the world of motorsports. “(Michael) Schumacher was the guy I wanted to be, but I never understood how to get there. I never understood what it meant to be a professional driver until I was introduced to go-karts at the age of 13.”

Weiron Tan is currently a friend of the Swiss watchmaking brand, Corum.

Tan has come a long way from being the starry-eyed boy watching his racing inspiration on the television. Today, Tan, along with two more Malaysian drivers, is a part of the Jackie Chan DC Racing team, with which he competes in the Asian Le Mans Series. But before all this, Tan started out where most professional race-car drivers start out – the karting track.

“I was introduced to go-karts at the age of 13, but it was considered quite late at the time. Others start as young as six or seven,” Tan says. What he lacked in experience, he soon made up for in talent; as he started to take on more races Tan quickly excelled and matured in the sport, winning the PLUS Yamaha SL International Challenge in 2010 against opponents who were older than him.

Even with promise in his driving abilities, Tan says it was immensely difficult to break into the world of motor racing. “Growing up, it was very difficult to find sponsors, especially coming from Malaysia. But, through hard work and dedication, we did manage to source funding from family, friends and we even got Resorts World onboard for my stint in the US,” Tan says, referring to his time driving for Andretti Autosport in the Pro Mazda Championships held in the United States.

Since coming back however, Tan has shifted his sights to endurance racing. “Formula One is no longer something I want to pursue.” Tan continues “Motor racing has always been an expensive sport and Formula One has become very inaccessible. If you haven’t got EUR50 million or know the boss of a team, it’s almost impossible to get into the sport. Whereas in other racing, there’re so many different routes to having a professional career.” One such route to becoming a professional driver is through endurance racing. Through a programme activated by Sepang International Circuit for young, up and coming drivers, Tan currently competes to become the first-ever Malaysian team to race the 24 Hours of Le Mans – the most prestigious race in the World Endurance Championship series.

Afiq Ikhwan Yazid, Weiron Tan and Jazeman Jaafar after their victory at the 6 Hours of Buriram race in Thailand.

The road to glory, however, is never easy. Tan says that if Formula 1 is a sprint, endurance racing is like a marathon. “In endurance racing, it’s more a team effort; each driver has to look after his own performance. Mentally, you must be strong, and physically as well.” In 24 Hours of Le Mans, teams have to maintain their focus for the full duration of the race. “Imagine having to drive the graveyard shift from 2am to 6am. It’s a challenge enough to complete a race like that but, to actually win it, that’s something else altogether.”

So what drives Tan to push through? “For me, its ambition. I am hungry to win, hungry for results. Ever since I started racing, it was always about winning. About being number one. If there ever was an opportunity to race on the highest level, the opportunity to win on the highest level, I’m going to be there to take it.” More than just glory, Tan explains: “Professional racing is also a dream that I pursue on behalf of my dad. He is a motorsport fan and he is an extremely talented driver who never had the chance to take his passion to the next level. So, I am grateful I get the opportunity to represent him in a way.”

Barely in his mid-20s, Tan is extremely grateful for all the support he has gotten to keep his career going. As a friend of the brand for Swiss watchmaker, Corum, he says “they have played a big part in supporting me to achieve this goal.” Beyond that, Tan counts his friends and family as his biggest supporters, and hopes to make them all proud with a high-level finish on the world stage.