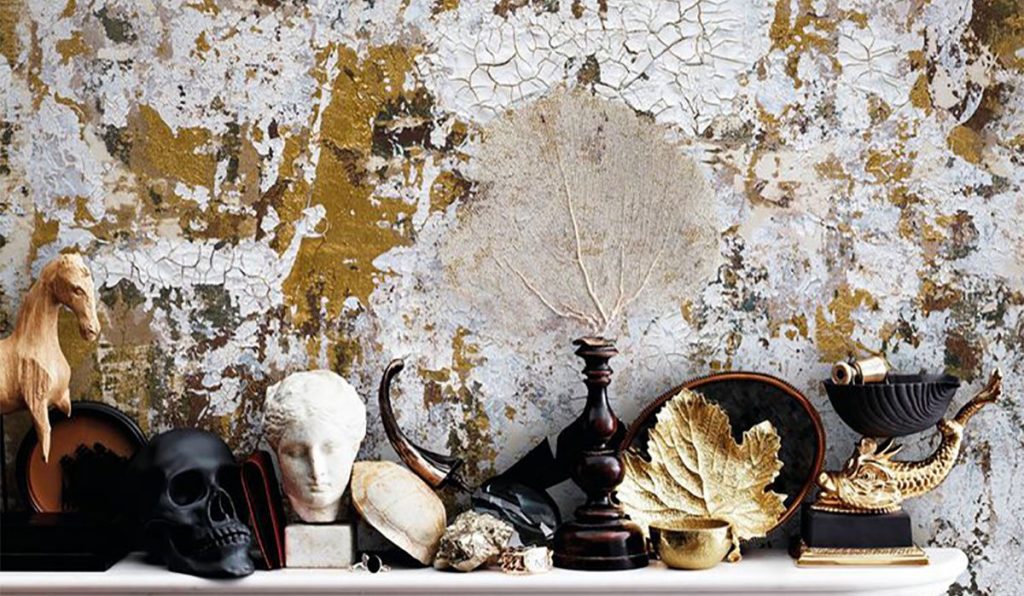 The beat-up, worn-out aesthetic has crossed over from apparel to wallpaper
Friday, March 8, 2019 By Editors

The fashion world has long been obsessed with distressed apparel, from Vivienne Westwood’s iconic safety-pinned clothing in the 1970s to the ripped jeans hanging off Gigi Hadid in more recent times. Italian label Golden Goose has gone as far as peddling pre-scuffed leather sneakers, featuring knotted laces practically on the verge of snapping. These battle scars are what give worn-out clothing – in fact, worn- out anything – its personality, and it’s given rise to a discernible trend where people increasingly want shabby chic on the walls of their homes.

“Distressed wallpaper has been on the up in the last 18 months,” says Tom Puukko, founder of Finnish interiors company Feathr. “People are moving away from the clean white minimalist box ideal and want more texture and depth in their interiors.”

Feathr has recently collaborated with American abstract artist Kiki Slaughter to turn her original artwork, Safari, into a stunning, highly textured wallpaper that conjures rustic grandeur. The iridescent creation reproduces the painting’s breathtaking details down to the warp of the canvas. Unsurprisingly, Slaughter herself works out of a crumbling studio in a former cotton gin factory, pouring, scraping and layering oil paint onto canvas.

The Safari wallpaper comes in four colours (gold, patinated, bronze and steel), and is an effortless way to add character to a home. So what if it’s not an authentic aged stucco wall – it’s not as if Gigi Hadid wore holes in her jeans from crawling on the floor.