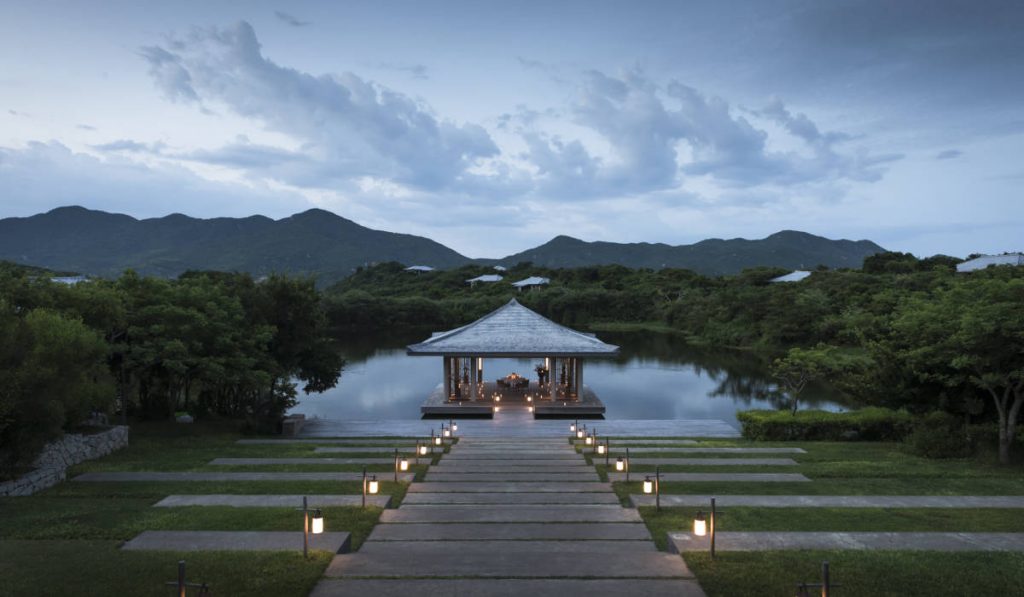 Few things attract more longing than the prospect of a long-awaited holiday. During the ordinary months, filled with mundane routines and the drabness of everyday surroundings, those moments of respite represent a gleaming sun hovering beyond the horizon, enlightening our increasingly frayed lives with rays of joy, hope and promise. For most travellers, one of the main things to look forward to during any trip is the opportunity to discover something new â€“ not just about the destination but also a little bit about oneself. And one of the best places to embark on this journey of self-discovery would be the serene contemporary beachside resort of Amanoi.

Embraced by rolling, evergreen-covered hills and the lush verdant landscape of the NÃºi ChÃºa National Park, one of Vietnamâ€™s largest natural conservation sites, this tranquil haven serves as a sanctuary for discerning travellers looking to retreat from the trials and tribulations of the modern world, while luxuriating in the creature comforts that they have become accustomed to. Amanoi (a portmanteau derived from the Sanskrit words for â€˜peaceâ€™ and â€˜placeâ€™) goes above and beyond in setting the benchmark for modern elegance by combining attention to detail with overall sumptuousness.

Launched in 2013, this five-star luxury resort is situated in Vietnamâ€™s south-central province of Ninh Thuáº­n, which is accessible via a two-hour direct flight from Kuala Lumpur. Viewed from above, travellers will immediately be able to spot Amanoi by the resortâ€™s curving rooftops in eggshell blue peeping just above the forest line. This distinctive feature is one of many introduced by Jean-Michel Gathy, a multi award-winning Malaysianbased architect who has personally conceptualised many of the properties under Aman Resorts since the founding of the group in 1988. Home to 12 luxurious pavilions, 16 villas and several private residences catered to those who wish to acquire a slice of this tropical paradise, the resort seeks to transport guests to a blissful realm that unites style with serenity.

The search for bliss begins at the Central Pavilion, an impressive edifice that sits perched on dramatic coastline overlooking the breathtaking natural harbour of Vinh Hy Bay, which is surrounded by unique rock formations and crystal-clear aquamarine waters teeming with all manner of exotic marine life. Eager thalassophiles who wish to observe these majestic creatures up close in their natural habitat can do just that by journeying to the resortâ€™s Beach Club to indulge in a little snorkelling as well as other water-sports activities that will appeal to anyoneâ€™s inner Jacques Cousteau.

Those who prefer to stay indoors can return to the Central Pavilion that houses several relaxing areas where one can unwind in peace. This includes a massive infinity pool overlooking a cliff, a well-stocked library, a trendy bar and the main restaurant complete with incredible views of the nearby sparkling bay. Diners will be spoilt for choice by the array of tantalising local dishes, including a tempting selection of savoury seafood dishes, conceptualised by the restaurantâ€™s Executive Chef Daniel Woodbridge.

According to Woodbridge, many of the fresh ingredients used at the resort are sourced daily from the nearby fishing village, which is also home to an ethnic minority group known as the Cham, whose ancestors once dominated the South China Sea with their vast trade routes that extended as far as China, Taiwan, Japan, Malaysia and Indonesia. It is estimated that around 70,000 Cham reside in the Ninh Thuáº­n province, and those who want to uncover the mysteries of their storied past can do so by travelling to Po Klong Garai. Just 45 minutes away by car, this ancient tower was originally built in the late 13th century and now serves as a common venue for major Cham celebrations.

At Amanoi, guests will also be able to immerse themselves in various experiences inspired by the ancient customs and traditions practiced by the Cham, including the Sacred Cham Dinner, a wonderful feast of the senses held at a secret enclave located within the property that involves dining beneath a blanket of stars followed by a unique blessing ceremony, where a Cham master will serenade the spirits using traditional Vietnamese instruments such as the Ä‘Ã n gÃ¡o (coconut shell lute) and the ginang drum.

If youâ€™re looking for a change of scenery, a trip to the charming residence owned by local village chieftain Ong Bay is a memorable experience that is simply not to be missed. Built in 1936, the nhÃ  rÆ°á»ng (traditional wooden house) resides in the heart of a peaceful fishing village where Ong Bayâ€™s ancestors first sought refuge during the reign of the Nguyá»…n Dynasty. Over the years, this humble domain has survived numerous onslaughts including the French Occupation and American Vietnam War. Today, it serves as a refuge for Ong Bay and his extended family, as well as the distinguished guests of Amanoi.

For those in need of a little extra pampering, the resortâ€™s Aman Spa would definitely be worth the trip. Like a picturesque postcard, this fantastic facility overlooks a calming lake teeming with lotuses in vivid pink and pristine white egrets circling above. Inside this tranquil meditative outpost, guests will be able to indulge in the wonders of the Individual Wellness Immersion, a bespoke programme conducted by the resortâ€™s visiting specialists that serves to rejuvenate the mind, body and soul through exercise, deliciously nutritious meals, spa treatments and healing therapies. As for the ultimate reward, it would have to be retreating to the comforts of the resortâ€™s sumptuous dwellings to unwind and linger at the private pool while soaking in the inspiring views of the magnificent surroundings â€“ the perfect ending to any day filled with excitement and exploration.

A member of staff ascends the elegant steps at the resortâ€™s Central Pavilion.