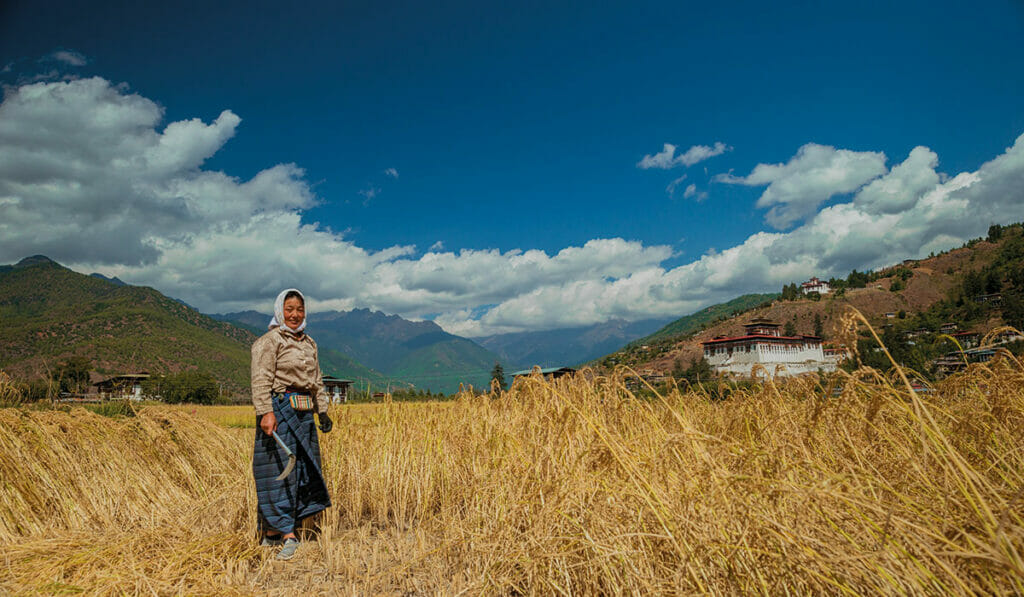 Well known for its Happiness Index, Bhutan definitely is a place that will put a smile in your heart.
Wednesday, April 29, 2020 By Editors

With bundles of dried pine needles thrice their size strapped like oversized backpacks on their shoulders, the two diminutive Bhutanese women are dwarfed by the loads they are carrying. Are they thatching a roof or collecting kindling for fire? Curiosity piqued, we greet them with with a cheery â€œKuzuzangpolaâ€, a respectful hello in Dzongkha, the countryâ€™s official language.

Bright smiles light up their tanned, rosy faces and we strike up a conversation with our guide Ugyen as the translator. It turns out these fragrant leaves, which they raked from the floor of the nearby blue pine forest in the Phobjikha Valley in central Bhutan, are used as cattle bedding. By sundown, the sisters would have completed about five round trips. It is obviously backbreaking work and I am touched they have time for a group of inquisitive travellers. I think about my bustling city lifestyle where we barely even make eye contact with each other and savour this moment of genuine human connection.

HAPPINESS IS A PLACE

I first travelled to Bhutan in 2012 for a yoga retreat and was profoundly struck by the sense of wellbeing and joy I felt during my stay in this serene destination. So when travel guide Lonely Planet named Bhutan the top country to visit on its Best in Travel 2020 list for its commitment to cultural and environmental sustainability, I knew I had to make my way back. After all, tiny Bhutanâ€™s famed concept of Gross National Happiness has to be experienced to be understood.

While there is one thing that is unfortunately dreary â€“ the bureaucratic hassle of visa application and figuring out what is included in the minimum daily fee of USD200 â€“ luxury amenities will cost a lot more â€“ these measures help maintain the countryâ€™s low-impact, highvalue tourism ethos. To bypass this annoyance, I engage travel agent Druk Asia (drukasia.com) to sort out the paperwork.

The agency also specialises in organising unique experiences that are not on typical sightseeing itineraries. My priority, I tell them, is a curated happiness itinerary to counter the burnout caused by my daily grind.

WRITTEN IN THE STARS

Interpreting star signs may be the millennial wellness fad of the moment, but the Bhutanese have long relied on this esoteric practice based on oneâ€™s birth details as a guide to living a good life. At the reading, the mystical blends seamlessly with the practical.

The schoolâ€™s vice-principal doles out quirky factoids I imagine will be entertaining conversation fodder (I was apparently a protective deity in a past life) as well as feng shui-type changes I can make to â€œimproveâ€ my life (sleep facing northwards). In the next breath, he offers up a timely piece of practical advice which I later realise is an ideal counter to my city slicker ways. â€œYour energy levels will be low this year,â€ he says. â€œSo spend more time in nature.â€

I soon get a taste of the restorative powers of forest bathing â€“ practising mindfulness while in nature â€“ during a hike in the Punakha valley, two hours from Thimphu. Breathing in the crisp fresh air, I meander through picturesque rice and chilli fields and up a hill dotted with native chir pine trees. I have been sleep-deprived for a long time but in the forest, I am refreshed, alert and grateful to be enjoying the lush greenery.

It is hard not to be appreciative of a country that prioritises preserving the natural environment over reaping a quick buck. Bhutanâ€™s commitment to conservation is poetically apparent in the Gangtey region, where Phobjikha valley is located. Here, rare blacknecked cranes, which originate from the Tibetan plateau, make this area their home during the winter months of November to February. There are only about 6,600 birds left in the wild, of which some 600 migrate to Bhutanâ€™s relatively warmer climes annually.

The Bhutanese regard the elegant cranes as harbingers of luck and the government has gone to great lengths to protect this rolling valley from overdevelopment by regulating both local potato farmers and tourists.

It seems the birds appreciate these efforts, with their numbers almost doubling since 1986.

When they arrive in November, the cranes are often seen flying around the nearby Gangtey Goemba monastery, which locals believe is a mark of respect. During our visit, we have multiple sightings of the notoriously shy cranes gliding gracefully in the distance. This is an auspicious sign, we are told.

In this deeply religious country, a traveller could ostensibly spend an entire trip flitting in and out of an endless series of temples. However, it can be more spiritually fulfilling to secure a private session where monks can perform customised ceremonies for the individual.

Samtenling Monastery, situated on the edge of the recently launched Six Senses lodge in Paro, is particularly foreigner- friendly without compromising on authenticity. The abandoned 15th- century monastery was restored with the hospitality companyâ€™s assistance and is now a working temple for local villagers and guests alike.

Our groupâ€™s blessing is for safe and smooth travels, says the leading monk before leading a group of six in a series of rhythmic chants. My attention is rapt as I soak in the heady atmosphere of the temple, replete with ornate statues and colourful wall art, the air infused with the scent of juniper incense and saffron-scented water. The mystical beauty of the ceremonial proceedings imparts an immediate sense of peace although logic dictates that I remain somewhat cynical to its supposed efficacy. Still, I have to suspend my disbelief when my departure flight, which was in danger of a delay due to inclement weather, miraculously takes off on schedule. It even lands in Singapore a neat 30 minutes ahead of schedule. The happiness in gaining extra time might just be the greatest blessing of all for a frequent flyer.

Ultimately, it is the chance interactions with people I have met along the way that has replenished me the most. Getting to the famed Tigerâ€™s Nest monastery in Paro, one of Bhutanâ€™s most sacred sites, involves a gruelling two to three hour uphill hike. However, this feels a lot less daunting in the company of wizened old pilgrims, parents carrying babies and little children scrambling up the trail. Their collective energy kept me going â€“ and continues to be a source of inspiration.

I also fondly recall our afternoon at the Khamsum Yulley Namgyal Chorten stupa in Punakha, when we serendipitously arrive during the inauguration ceremony of the new abbot. The affable abbot personally offers us butter tea and biscuits and we share this humble treat with the monks, communicating through the universal language of smiles. I have no doubt the contentment I experienced in the company of kind, gentle souls is a feeling I will carry with me for the rest of my life.