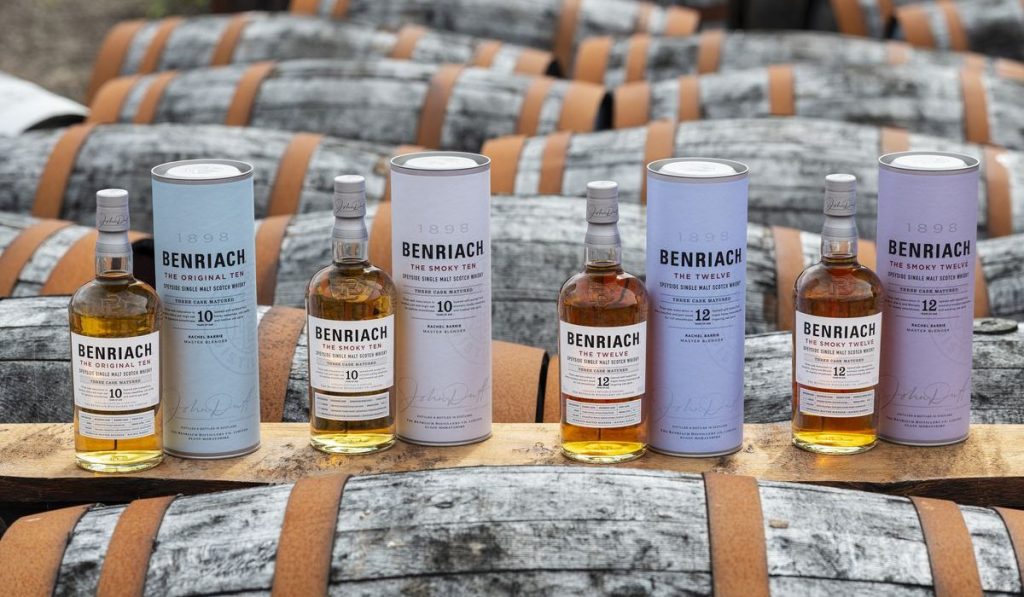 One of the most imaginative Scotch distilleries has reimagined its core range – which includes smoky variants on age statements
Wednesday, March 24, 2021 By Weets Goh

At Speyside distillery Benriach, it’s all about possibilities. After all, few other single-malt Scotches can boast of the kind innovative, left-field bottlings that it dares – everything from a 12-year-old expression aged in Sauternes barriques, to a 22-year-old one that started off in American bourbon before being finished in Moscatel wine barrels.

Joining the dram-fray is a new portfolio from Brown-Forman master blender Dr Rachel Barrie (who’s also responsible for Glendronach) that reimagines the label’s core range of 10- and 12-year-old whisky – both fruit bombs with the 10 expressing rich malt, while the 12 displays plenty of sherry.

More interestingly, Barrie and her team has also created smoky versions for each age statement – presented as the Smoky Ten and Smoky Twelve.

“The new range perfectly marries tradition and innovation that is central to Benriach’s story. Inspired by the 1994 bottling of the Original Ten, with its fruit-laden complexity and smooth, rounded taste, the new range re-imagines the 1898 origins of Benriach, brought to life in the 21st century through fusing distilling styles with extraordinary casks.

“In the new Original Ten, a more richly flavoured, rounded malt character might be discerned, whilst the Twelve balances richly sherried malt with added layers of fruit complexity, reaching a pinnacle at 12 years old.” shares Barrie.

How extraordinary? The Smoky Ten sees time in not just bourbon casks, but also Jamaican rum barrels and charred virgin oak – the lattermost of which is a recent phenomenon in the world of Scotch. Meanwhile the Twelve features bourbon, sherry and – most unusually – marsala casks. While smoky, both expressions are nothing like the peated Islay malts, and instead express a softer, sweeter wood smoke as opposed to the more medicinal peat smoke.

All this would have been for naught, of course, if creativity did not lead to results – the Smoky Twelve took the third spot on Whisky Advocate’s list of ‘Top 20 Whiskies of 2020’, as well as multiple medals at the prestigious San Francisco World Spirit Competition.