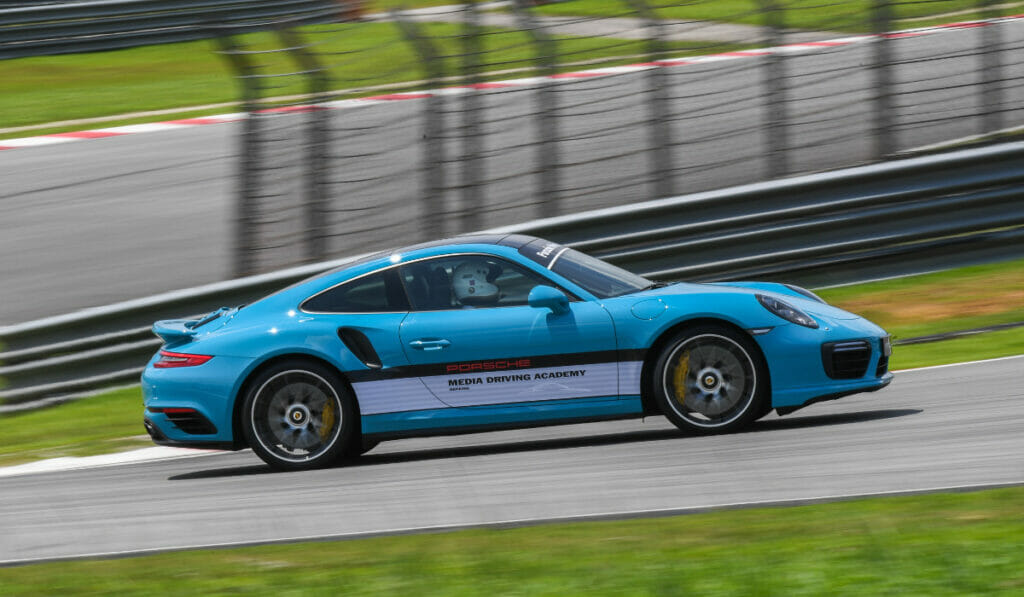 The walkie talkie came to life with a short burst of static as I was slowly rolling out of the pit lane onto the Sepang International Circuit (SIC), the very same SIC that weâ€™ve all seen on TV with Formula 1 cars or Japanese GT racers battling it out to take a spot on the final podium. On that day, the track was clear, the grandstands were empty and the voice coming through the walkie talkie was that of Earl Bamber, two-time overall winner of 24 Hours of Le Mans.

Bamber was driving in front of me in a light blue Porsche (pronounced por-shuh, in case you were wondering) 911 Turbo S, while I â€“ with zero championship wins to my name â€“ was following suit in a grey 911 Carrera 4S. â€œWeâ€™re just going to be picking up a bit of speed as we come out of the pit, stay close,â€ Bamber said through the radio. I soon found out, however, that â€œa little bit of speedâ€ was probably a gross understatement on his part.

It is easy enough to drive fast in a straight line: step on the accelerator, keep your hands steady and youâ€™re golden. But what happens when there are multiple corners ahead of you and youâ€™re driving in excess of 200km/h? Or what do you do when, suddenly, there is something you must avoid? This is where Porsche steps in. In a controlled environment, they teach you the ins and outs of driving a Porsche through something called the Porsche Driving Experience. I have always maintained that, with the absurd numbers coming out of todayâ€™s sportscars (think brake horsepower, top speed, torque), the only place one would ever get close to experiencing the full potential of these cars, without being labelled a menace to public safety, would be on the race track. And, yes, through this programme, you get to do a little bit of that too.

Back to the task at hand, I muscled out of the pits struggling to keep up with Bamber. Behind me were two other cars: the bigger Panamera 4S and the even bigger Cayenne Turbo S. As luck would have it, Porsche rolled out almost the whole range of cars it has to offer here in Malaysia, and that also included the very new Panamera 4S and a more powerful Panamera Turbo variant. So, basically, I had access to the full range of 911s from the Carrera and Carrera 4S to the Turbo and Turbo S, and not to mention the 718 range of cars like the Boxter and Cayman for a full day on the track.

This is highly significant because Porsche is probably the only manufacturer that has cars with engines in all three setups: front, mid and rear. On top of that, the way it delivers power from these engines to the tarmac can either come in the form of rear-, front- or all-wheel drives. Of course, in a straight line, the difference between each of these setups and cars is not that pronounced but, when it comes to taking corners in the quickest way possible, suddenly each of them have characteristics of their own. And in order to ascertain which Porsche will give you the most fun, depending on how you like to drive, can only be determined when you push it hard. To do that, we recommend you join in some of driving experiences organised by Porsche. Even if you are not a speed demon, there are activities that will just make you a better driver in everyday situations.

Inside my 911 Carrera 4S, a quick glance at the tachymeter told me I was already at 200km/h and the first corner was fast approaching. Following Bamberâ€™s lead, I braked hard, slowly eased off the brakes and turned into the corner. The g-force pushed me to one side but holding on to the steering, I looked to the apex of the turn. â€œHit the apex,â€ Bamberâ€™s voice trailed from the radio and so I touched the curb and, as I came out of the corner, slowly squeezed the throttle until the car straightened out and, then, pedal to the metal. The growl from the engine right behind me was glorious. Rinse and repeat, the 5.5km of Sepang seemed way too short in my adrenaline-filled state and, before I knew it, I was coming out of the last corner onto the final straight and, yes, I had an enormous grin as I crossed the finish line.